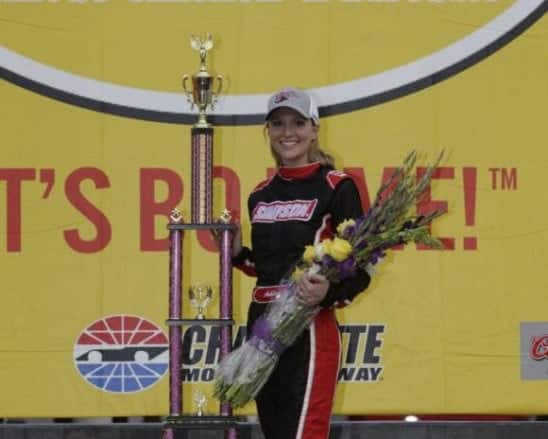 When the Sprint Cup Series heads to Charlotte Motor Speedway next month, the ladies of NASCAR will kick the action off on Thursday, Oct. 9, with the Better Half Dash.

For the fourth consecutive year, they will hop into Bandolero cars and race the quarter-mile to raise money for their chosen charities.

Earlier this week, rain threatened one of the practice sessions leading up to this race.

Amy Reimann is new to racing but is excited to race for a good cause, especially with some assistance from Dale Earnhardt, Jr.

“I’m about as green as it gets, so I need a little bit of practice. But I hope we’re competitive and I hope we get the trophy,” said Reimann. “Dale talked me into it. It was offered to me by Kelly (Earnhardt Miller). And I didn’t really know what the Better Half Dash was to be honest. I mentioned it to Dale and he said, ‘yeah, you’ve got to do it. You’ve got to do it. It’s going to be so much fun.’”

“We’ve got some pretty stout competition this year,” said Stremme. “We’ve got some girls coming back. It’s going to be interesting with the bandoleros being so, you know, everybody running the same thing. We don’t get to tweak or test in them.

“It’s going to be tough; it’s going to be interesting. I think it’s all going to be about starting spots. Just because we sit in the pit box week in and week out doesn’t mean we’re not competitive ourselves.”

Qualifying for the Better Half Dash will be held on Monday, Oct. 6, and fans can help choose the polesitter by donating on the drivers’ behalf. The race winner will take home $5,000 for her chosen charity, while $2,500 will go to Speedway Children’s Charities and Motor Racing Outreach.