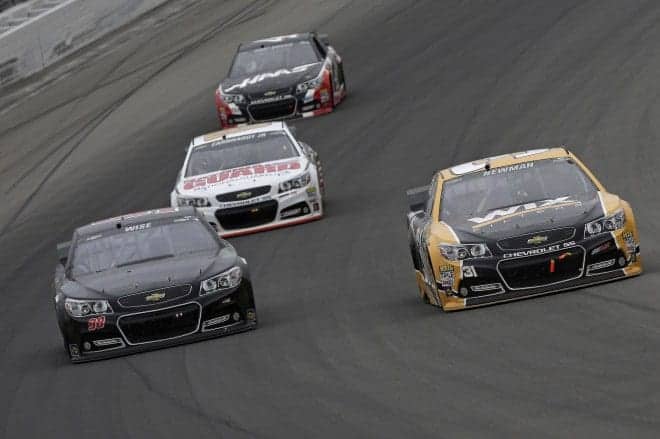 It was January of 1990, and one of what I’m sure were several children traveled with his family to an annual motorsports show in Valley Forge, Pa., to see high-profile drivers such as Dale Earnhardt, Richard Petty, Rusty Wallace, Terry Labonte, Harry Gant and Kyle Petty. In the weeks leading up and following, these drivers were fine-tuning their machines for the upcoming season at the shop and at Daytona International Speedway.

Now the private test sessions have been scrapped, starting in 2015.

Times have changed. There were less race weekends 25 years ago, but back then a driver’s absence at the race shop was often a void. Today, with all of the innovation, mainly in the form of simulations, at times it really isn’t necessary for the driver to be present.

That is where thoughts start going back and forth regarding the new rule package. Hopefully alleviating the aforementioned issue are some implementations that will make it tougher for the driver to get a handle on the car and the novel idea in keeping them as a greater part of the formula through introduction of options such as the driver adjustable track bar.

Are the changes in place enough? Of course not. We live in a racing community where the word satisfied is hardly used. More can always be done. If we keep making changes, though, won’t it continue to drive up the cost in the short run for pieces we are told will reduce it in the long run?

Eliminating testing does sound like a nice idea on paper. Loads of money is being spent for arguably not the most advantageous of reasons. On the other hand, ideas like this keep closing that window little by little for the new guy to enter the NASCAR Sprint Cup Series. It’s pretty much the only professional sport where an ordinary human who has done well in their life and has an immense amount of financial backing can declare that they are going to start their own team. How is someone going to want to do this if they have no way of getting an idea of how they would stack up against the existing competition performance-wise?

Sounds like the rules continue to get even tighter as well. It is no secret that NASCAR officials have shot down unique ideas that teams have come up with for decades. Search for Maurice Randall and you will find some detailed accounts from him about entering the NASCAR world with a Chrysler in the 1980s. Much of what he explained were mechanical terms that went way over my head, and I would venture to say would be something that only a select few of today’s drivers could comprehend. Randall did not end up with much of what we would consider success, but after many attempts finally made his way into the field on a handful of occasions. The opportunity was still there and he made the most of it, and with all this astounding knowledge he was the driver, mechanic and engineer all in one.

For each of the Maurice Randall stories there are several more that have probably gone undocumented. I spoke with Mike Potter, a driver who made 60 Cup starts from 1979-1993, earlier this year. The way he and his buddies described that time frame was like some big party despite all the work involved just to make it into the show. He spoke to how big league racing is more about aerodynamics, technology and engineering now rather than a driver being able to control the car.

Seems like next year’s changes are moving in the right direction, but there are other factors that appear to set it back as well. NASCAR is putting more back in the driver’s hands, but at the same time instituting limitations that restrict that through reduced horsepower and tapered spacers. Can you entirely blame the sanctioning body, though?  Some fans have remarked that they despise seeing a few drivers or teams run away with the show yet in the same breath wish for the machines to have an identity and not become like the International Race of Champions cars of yesteryear. It’s tough and perhaps nearly impossible to have both.

No matter what is put in place to even the playing field, these teams have the ability to outsmart one another by pushing the rules that are defined and a select few end up surging ahead time and time again. Who would have thought that a couple decades ago pit crew roles would be filled by former pro football players and staff would include engineers with incredible college educations and past professional backgrounds? Because of examples like this, it’s a forever moving target. Who knows what these minds will think of next.

Maybe the best thing to do is just take a step back and appreciate what we have. On the NASCAR side, somehow they will continue to implement and refine more ways for the driver to stay or become more involved in the picture at the shop and be more relaxed to focus 100 percent on the task at the track. Just maybe some of that free time from testing could be spent convening for more outings where a little guy like I once was, whose family couldn’t afford to go to the track but watched religiously on television, could meet their hero and be sold for life.

What worries me most about the lack of testing is that it creates a status quo which can have a bad effect on competition. Let’s say one team or organization hits on the setup after the new changes right away and comes out of the box head and shoulders above the others. How are those other teams supposed to get up to speed without testing? No matter what NASCAR does the big teams will still find a way to test at non-sanctioned tracks anyway so NASCAR is fooling themselves if they think this levels the playing field at all.

Brian
Reply to  Bill B

Bill, Your missing the point on the testing ban. This includes ALL testing even at non-sanctioned tracks. Essentially, a team cannot go to Virginia speedway to shake down a new road racing design or head to South Boston to shake down their Bristol cars.
The big teams were the ones doing the most testing so it likely will not change the status quo. Hopefully, it will allow teams that have smart and effective crews and shop personnel to also suceed even if with a smaller team.

Or, you could get your racing fix with ProCup, Southern All-Stars, or any of the regional touring series. In more ways than not, they are what the Winston Cup that we knew and loved was.

If there is one thing that NASCAR fans HATE it is the unfettered power of a V8 engine. So rather than lower displacement and let fans be amazed by how many horses can be generated with today’s technology (the 281 in today’s Mustang can beat the crap out of the old 351) NASCAR gives us a restrictor plate with a new name and some 1970’s internals. What we really want is some Hybrid Camry’s so we can eliminate that Growl and rumble fans hate and have us a nice quiet race. Genius, pure genius, who says NASCAR has completely lost touch with the fan base. PS: MOTOR, JohnQ love motor. Grrrrrrrrrrrrr.

JohnQ, while we may love that sound, I bet the manufacturers dont. Its an interesting conundrum isn’t it? The fans love the big V*’s – but the fans are leaving. The manufacturers want relevance to what they sell, but continue to spend hundreds of millions on something that’s been obsolete for 20 years. Interesting.

I can’t say I’m very impressed with these rule changes. Yes aerodynamics continues to be an issue. Goodyear continues to bring crappy tires each week. I’d rather have seen them just to go open testing at all NASCAR tracks or wherever they want. Let’s face it, the big $ operations have computer simulations and all that jazz already and the smaller $ operations don’t.

What I really want to see as a fan is side by side racing & passing – I don’t think NASCAR will get there with these changes. Quite honestly every time they screw around with the car and the engineering stuff, IMO, they make the racing worse not better.

Just for a silly side note on the new rules. Cup cars are getting rain tires so the cars can run and the fans can watch in the rain. Well, the hauler parade got canceled because of rain. Bet there was a lot of disgruntled fans.