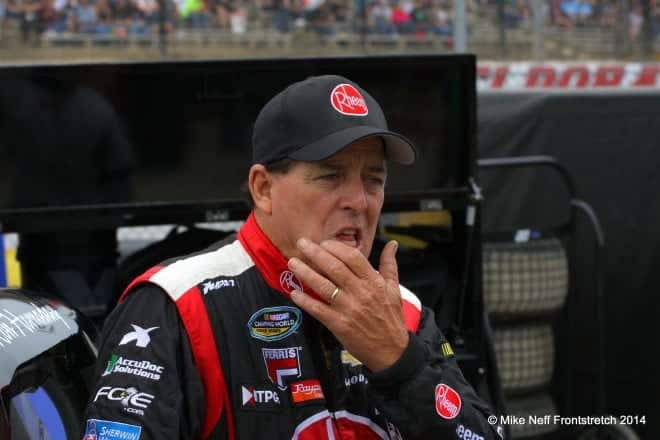 After sitting on the sidelines for the last three races, Ron Hornaday, Jr. will be back on track this weekend at Las Vegas Motor Speedway. The veteran was sidelined just before the Camping World Truck Series headed off to Canadian Tire Motorsports Park last month. Hornaday will pilot the No. 9 Rheem Chevrolet for NTS Motorsports.

Earlier this month, the “global manufacturer of residential and commercial heating and cooling systems” and so much more announced they would back the four-time champion for this weekend in Las Vegas and on Oct. 31 at Texas Motor Speedway.

“Rheem is pleased to play a part in bringing Ron Hornaday back to where he belongs — that is, racing trucks to win and bringing excitement and enjoyment to Camping World Truck Series fans,” said Ed Raniszeski, managing director, Rheem Motorsports. “None of this would have been possible without the solid support of NTS Motorsports and RCR. We all welcome Ron back and can’t wait to see him back in the saddle.”

Hornaday ran full-time for NTS last season before being dropped from his ride right before Homestead-Miami Speedway. He ran a single race for Turner Scott Motorsports in a last minute deal that was set up for the season finale. This season, he was driving in a race-to-race deal where the ride hinged on sponsorship each week.

“I want to say thanks to Bob Newberry and Rheem for working together to give me this great opportunity to get back behind the wheel of a NCWTS Silverado,” Hornaday said in a team release. “I’m looking forward to racing in Las Vegas, as we have a lot of family and friends on the west coast that will be there. I know Ryan (McKinney) and the team have prepared an awesome truck for me to race and I’d like nothing more than to get Rheem and NTS into victory lane this weekend.”

While it’s sad to think the veteran was in such great shape to try to make a championship run and now finds himself well out of the battle, the good news for Hornaday is that points simply don’t matter to him anymore. I wouldn’t blame him if that thought were in the back of his mind that he could have already won this year and made a charge at a record-breaking fifth championship, but that just wasn’t in the cards for him this year.

Simply put, if he and McKinney would like to take a chance at heading to victory lane, whether it’s pit road strategy or just pushing the setup, they’ve really got nothing to lose. And Hornaday racing with nothing to lose just might end up in Victory Lane.