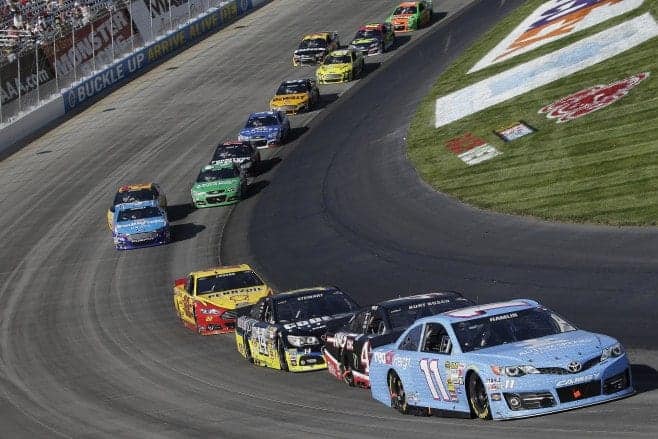 Well, well, well, what do you know? Two races in, and so far, the 2014 edition of the NASCAR Sprint Cup Chase for the Championship has been a success. Each race so far has been jam-packed with action, storylines, and drama, and with the first elimination of the Chase on tap for today’s round of the playoffs, that trend looks primed to continue. The Team Penske machines have demonstrated that they have the upper hand thus far as we reach the quarter mark of the playoffs, but after a pole run on Saturday that was preceded by back-to-back top-5 finishes in the first two races of the Chase, Kevin Harvick appears to be ready to challenge as well. Could he be the third Chaser to grab a win? And what about the Chase cutoff? Four drivers will be eliminated from playoff contention, and no one save for the Penske cars are safe.

All told, there is an awful lot on the line today at a track that has been known to chew up race cars and spit them out. Things could get interesting I suppose…

With the new elimination system that NASCAR has implemented for this edition of the Chase, every third race in the Chase has essentially become an amped-up version of Richmond. Only two drivers are walking into today’s race knowing that they are locked into the next round of the playoffs, the rest of the field of 16 is essentially just hanging on and hoping for the best.

There are of course a few drivers who have a large enough points’ cushion to feel relatively comfortable about their standing heading into next week. Barring some seriously unforeseen circumstances, Kevin Harvick, Jimmie Johnson, Kyle Busch, Jeff Gordon, and Dale Earnhardt, Jr. should all advance to the next round of the playoffs without much issue. Pretty much everyone else from eighth on back in the standings needs to race his proverbial ass off today in order to secure a berth in the next round.

As for who that will be to advance…well, let’s just say the chances of accurately predicting that are pretty small. Looking at practice and qualifying times, it looks as though AJ Allmendinger, Aric Almriola, Greg Biffle, and Kurt Busch look to be in the most trouble in terms of on-track speed. Biffle, Almirola, and Busch in particular are in an especially bad spot, since all three are below the cutoff point in the standings and will likely need to throw some Hail Marys today in order to put themselves in position to advance.

As for the rest, it’s too close to call. I’d say that Biffle, Almirola, and Busch won’t advance, but that fourth spot…that fourth spot could go to anyone that has a bad day.

2. Will Dover be a wreckfest or a clean race?

Dover is sort of like the Dr. Jekyll and Mr. Hyde of race tracks. Sometimes when the series visits Dover, the race is an absolute wreckfest. If you pay a quick visit to YouTube and search for “Dover wrecks,” you are sure to find some extremely large and extremely nasty accidents that took place once upon a time on Dover’s infamous high banks.

Oddly enough, however, for as many “Big Ones” that have happened at Dover, there are equally as many races at Dover that went accident-free. In regards to this weekend, the unusual dichotomy between clean races and wreckfests in Dover’s past has special relevance to today’s festivities at the track, as for the first time in the history of the track, drivers in playoff contention will be eliminated from the Chase.

What does it all mean? If the race turns out to be a wreckfest, then it could completely turn this year’s Chase on its head, as several drivers who have been competitive all year long face the very real possibility of being eliminated today.

Likewise, if the race goes clean and green, that could shake up the Chase in a different way, as drivers who may have faced bad luck in recent weeks would have a chance to reach the next round of the Chase on their own merits.

Either way, the “look” of the race today could end up playing a big role in the outcome of the Chase.

3. Will Jimmie Johnson finally show up?

Just in case you haven’t watched NASCAR much over the last few years, let me drop a piece of information on you that has some relevance to today’s race: Jimmie Johnson is kind of great at Dover International Speedway. In fact, he’s probably been the most dominant driver in the track’s history. Johnson has won the past two races at Dover and is a nine-time winner at the track. Dover is, by all accounts, Jimmie Johnson’s house.

As such, one would think Johnson would be the overwhelming favorite heading into today’s race given his past dominance at the track. But with how Johnson has performed over the past three months, it just doesn’t feel right to anoint him as the favorite like we have in years past. Johnson’s team, while solid, has shown no-sign of displaying the kind of dominant speed that has vaulted the team to six titles in the sport, not since May of this year at least. As such, can we really call him the favorite? Not in my eyes.

With the #48 team’s best track on tap for today, their performance will be indicative of where the team stands as a whole going into the rest of the Chase. If they can’t step up at the track that is unquestionably their best, why should we believe they have the speed to win anywhere else?

4. Who will take the checkered flag in the final race of the Challenger Round?

With today being the last race of the opening “Challenger” Round of the 2014 Chase, all of the Chasers will be working extra hard to get a win as they know full well that points may not completely lock them into the next round of the playoffs. As for who will grab that win today, a few options stand out above the rest of the pack.

In terms of an overall favorite, it’s hard to ignore Kevin Harvick. Harvick qualified his car on pole for a personal-best 7th time this season and has shown elite speed all weekend long. Harvick has been the best Chaser thus far without a Chase win, and frankly, all signs seem to be pointing to today being the day for that win to come.

As for other favorites, Kyle Busch is an intriguing choice this weekend as well. Busch has run very well at Dover recently and has shown a surprising amount of speed throughout the Chase thus far. He’ll start on the outside row of today’s race and looks like a legitimate threat to win for the first time in months.

For a darkhorse pick, look no further than Jamie McMurray. For the third week in a row, McMurray has displayed elite-level speed and scored a great qualifying run to back it up (he’ll start 5th). With nothing to lose and everything to gain, McMurray could very well break through to become the first non-Chaser to win a Chase race since he won at Talladega last Fall.

“Well, well, well, what do you know? Two races in, and so far, the 2014 edition of the NASCAR Sprint Cup Chase for the Championship has been a success.” There you have it. Matt has deemed the play-off system a success. I assume that Matt is majoring in marketing in his senior year.

I do have one unsettling observation to add. The Chase has been around since 2004. Matt, (and Summer), are in the early 20’s which means that for the most part their personal NASCAR history has been based on the Chase format. What I find unsettling is that we are watching effective marketing in action as the younger generation is finding the Chase format and racing to be acceptable. This is no reflection on Matt and Summer as they are just buying into what is being put out there by NASCAR it’s just that for fans that go back farther than 2004 it’s a lot harder to watch NASCAR in its current form. The only thing that keeps me going is my love of racing.