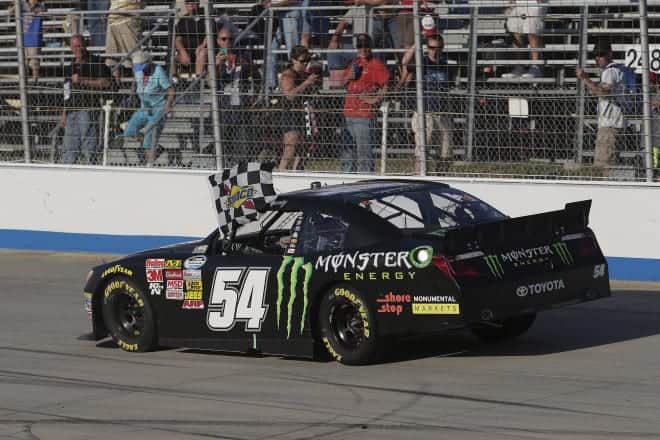 After Joey Logano dominated much of the first half of the Dover 200, Kyle Busch would assume control after a pit stop with around 100 laps to go and would never look back leading the final 101 circuits en route to his fifth Nationwide Series win of 2014 and the 68th of his career.

Saturday’s race at Dover once again showcased a battle between the two most dominant organizations in recent Nationwide Series history, Joe Gibbs Racing and Team Penske. Busch and Logano combined to lead 196 of the 200 laps run on the day.

Chase Elliott is proving to be unflappable down the stretch as he closes in on his first Nationwide Series championship. Elliott secured his fourteenth top five of the season with his third place showing at Dover. He will take a 26-point cushion to Kansas Speedway next weekend, a track at which he has never raced. Of course, he never raced at Texas,Darlington, and Chicago before either…

Chris Buescher has made himself into a household name in 2014. The Prosper,Texas native continues to be Roush Fenway Racing’s most consistent driver in the Nationwide Series in 2014.  Buescher would run in the top five all day long and score a fourth place finish at Dover. It is no longer a question of if he will win another race this season it’s only a matter of when.

Usually no one considers seventh place to be a bad finish, but when you are Regan Smith trying to desperately to gain ground on your rookie teammate for the championship it’s not what you’re looking for. While Smith does have 23 top 10 finishes in 2014, he has only three top 5’s over the last twelve races. Dover was a  missed opportunity for Smith to make up ground. Smith will need stellar efforts over the next four races or Homestead may not mean that much to him.

Dylan Kwasniewski‘s lack of progress in 2014 is not necessarily through any fault of his own. Between owner disputes and sub-par cars on race weekend, it is hard to fault a kid with a lot of talent. Only three top 10’s in his rookie season, though, really puts him under a bigger microscope, especially considering the success of  fellow rookies Elliott and Buescher.

Oh, how things can change in the matter of a week.  From celebrating the spoils of victory at Kentucky to having a suspension issue just nine laps into the race at Dover, Brendan Gaughan experienced the highs and lows of the sport in the matter of waht seems like just moments.

Justin Boston recorded his second consecutive top-12 finish in as many Nationwide starts on Saturday, scoring a 12th place finish at the Monster Mile.

Double Duty and the Start and Park Effect:

6 drivers who competed on Saturday will also compete on Sunday in the AAA 400.

Dover shaped up, as was expected, as a battle between Kyle Busch and Joey Logano. However, young guns Chase Elliott and Chris Buescher proved their mettle all weekend as they amde themselves into formidable contenders for the win.  Some drivers, like Elliott Sadler came through with a strong finish facing an uncertain future for 2015. Dover may never move the excitement needle the way it once did, but it is one of the Nationwide Series’ toughest tests of the year. Look for Kansas next week to present another challenge and perhaps separate championship contenders even further.

How is it that for the “Ugly” section of this article the obvious issue of Sprint Cup drivers is never stated?

Trevor Bayne’s been consistent this year. He has 18 top-10’s and 25 top-15’s, with only 2 DNF’s and 4 times not on the lead lap at the finish. He won a pole once and would be a winner without Cup drivers. He was 2nd twice and one was the 1st Dover race. Kyle Busch stole Trevor’s win then.

Chris,
your comments are falling on deaf ears though I agree with you 100%. I have brought this up many times, why not have in the “Ugly” section cup drivers blowing the field away. To me that’s uglier than some shoestring budget team having major problems. But these so called “journalists” are mere lap dogs and wouldn’t dare criticize how rotten it is to have these cup superstars absolutely stink up the show to high heaven. I do not watch the busch races when they’re companion events because I know the script before they even drop the green flag. One of the greedy cup drivers looking to add to his trophy collection dominates then acts like he’s excited to have beaten a field full of either terribly underfunded teams or drivers with much less experience, or in the case of Eliiott sadler, one with inferior talent who also criticizes us who think cup drivers should stay out of the races even though he can’t beat any of them.

I have often wondered if NASCAR would be more responsive if the racing press functioned like the rest of the sporting press. If baseball or football ever came up with something as competition killing as Cup drivers demolishing the lesser series the fan ire would be magnified by the sporting press. The racing press however functions as both NASCAR PR and unabashed apologist. As fans they do us a disservice.