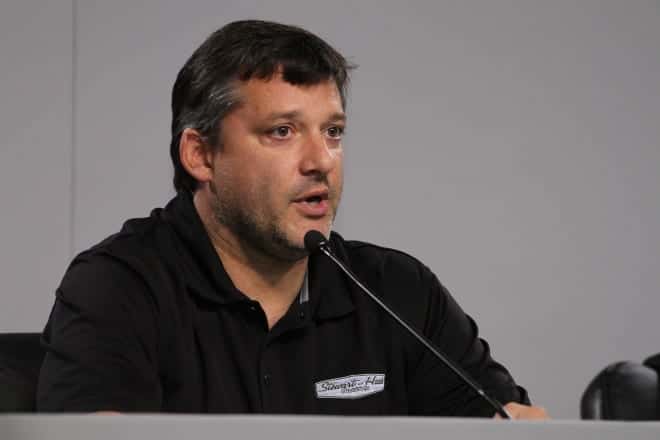 On Monday morning, Tony Stewart spoke to the assembled media (writers, and cameras from multiple media outlets including FOX Sports and ESPN) for the first time since he was cleared of any wrongdoing in the wake of the death of Kevin Ward, Jr. at Canandaigua Motorsports Park.  It was also the first time that Stewart took questions from media members since before the fateful night in Canandaigua.  While relieved that the potential criminal issues are over, Stewart clearly came off as emotionally troubled.
Stewart-Haas Racing insisted on no questioning about the incident itself.  Their belief is that Ontario County District Attorney Michael Tantillo’s explanation of what happened, given during his press conference on Wednesday in Canandaigua, is the definitive explanation.  Stewart stood by his previous quotes to the AP that the incident was a complete accident.  Stewart also revealed that he had never met Ward prior to the incident.  He had raced against him in previous Lucas Oil Empire Super Sprints races, but had never actually talked to the 20-year old racer.
The revelation by Tantillo that Ward was racing under the influence of marijuana doesn’t mean anything to Stewart.
“Honestly, for me, it didn’t change anything,” Stewart said.  “To me, the young driver lost his life.  It didn’t matter why.”
Stewart has not reached out to the Ward family, and does not feel that he needs to talk to the Wards for closure purposes.  However, he is more than willing to talk to the Wards if they want to.
When at home in Indiana, Stewart spent the first couple of days laid up in his bedroom, only emerging for basic needs.  He stated that he had no desire to see or talk to anybody.  Eventually, a small group of people gathered at Stewart’s home to lend him emotional support.  Those people included family, close friends, and confidantes such as Bass Pro Shops’ John Morris.
In regards to Stewart-Haas Racing, Stewart believes that he is letting his team down.  He admits to being a cheerleader, but that he really hasn’t been able to help out the organization due to his issues.  That sentiment goes for Stewart’s open-wheel racing organization, Tony Stewart Racing, and Eldora Speedway as well.  Stewart’s sponsors, though have expressed their support through the whole ordeal. While the performances on-track since returning at Atlanta haven’t been great, according to Stewart, they aren’t that much different than the rest of the season.
For the time being, Stewart has no plans to race Sprint Cars.  He did not permanently rule it out, but he will not be driving extracurricular sprint car races for the foreseeable future.