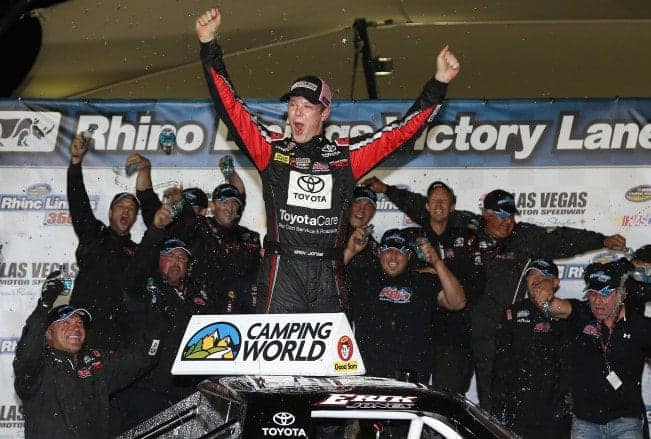 In a Nutshell: Erik Jones took the checkered flag 1.329 seconds ahead of teammate Darrell Wallace, Jr. to win the Rhino Linings 350 at Las Vegas Motor Speedway Saturday night. Jones took the lead for the final time on lap 133 of 146 and never looked back. Matt Crafton and Red Horse Racing teammates Timothy Peters and Brian Ickler rounded out the top 5.

Who Should Have Won: After starting 13th, Erik Jones struggled for much of the early stages of the race with a loose truck, sometimes so free that he nearly wrecked his No. 51 Toyota. But a long green-flag run to end the race and some careful adjustments by crew chief Eric Phillips gave Jones exactly what he needed to run down teammate Darrell Wallace, Jr., en route to his second win this season in the part-time schedule he’s splitting with owner Kyle Busch.

After starting the season with Win-Tron Racing, Mason Mingus and Billy Boat Motorsports announced last week that the two would pair up for the remainder of the season. In their debut together at Las Vegas Motor Speedway Saturday night, Mingus actually ended up bringing out the first caution for a spin just three laps into the race. Though he was able to continue on, Mingus finished 18th, three laps down in his debut with BBM.

The rookie has worked hard all season in learning the tracks and the trucks as he gains experience. It’s unrealistic to think that a new team will be strong right out of the box. The fact that Mingus spun but was able to continue on, instead of sitting in the garage in a wrecked mess that could have happened is definitely something to be happy with. As the team works to gel together and Mingus gets more comfortable, things will likely turn upward for the young driver.

After sponsorship sidelined him following the race at Kansas Speedway back in May, Brian Ickler made his return to the Truck Series, piloting the No. 7 Bullet Liner Toyota for Red Horse Racing. Though he was out for four months, Ickler was strong after the team unloaded the truck, running in the top 5 in both practice sessions, but a late caution in the second qualifying session left Ickler unable to make a lap, and he was relegated to a 14th-place starting position.

Ickler struggled with the handling of the No. 7 Toyota in dirty air for much of the early part of the race, but a two-tire pit stop on the competition caution on lap 30 put him inside the top 5. Though he dropped a bit on a wild restart, the driver of the No. 7 remained inside the top 10 for the remainder of the night and brought home a solid fifth-place finish in his return.

“It felt great to be back behind the wheel of the No. 7 Bullet Liner Toyota Tundra this weekend. (Crew chief) Chris Carrier and everyone at Red Horse Racing did a great job putting this truck together, and we were fast all day long,” Ickler said. “We didn’t start where we should have; we were much faster than that for sure, but we put qualifying behind us and focused on the race. We were a little loose in the beginning, but once we got up into the top five, we stayed there. I can’t thank Bullet Liner enough for the opportunity to race tonight.”

Since sponsorship – or a lack thereof – put him on the sidelines, it’s hard to guess when Ickler might race in the Truck Series again, but his return was stout. The KBM trucks were too tough to beat for the whole field, and the only other two drivers that finished ahead of him were championship leader Matt Crafton and RHR teammate Timothy Peters. Ickler is one of those drivers that has the talent to win races and contend for championships, provided someone is willing to put the money on the table for him to race.

I’m starting to feel like a broken record each week talking about short fields. The Rhino Linings 350 marked yet another race this year that failed to have a full lineup when the green flag flew. Only 30 trucks started the race, and four of those trucks didn’t even complete ten laps.

No. of Rookies to Finish in the Top 10: 2; Erik Jones, finished first; Ben Kennedy, finished seventh

Points Update: Matt Crafton maintains the championship lead and has expanded his cushion to 19 markers over teammate Johnny Sauter who remains second. Ryan Blaney remains third, 27 points behind the leader, and Darrell Wallace, Jr. sits fourth, 33 markers behind. Joey Coulter, who moved up one spot following his seventh top 10 in the last eight races.

Following a disappointing 16th-place finish, two laps down, German Quiroga dropped out of the top 5 to sixth. His Red Horse Racing teammate Timothy Peters, who finished fourth, moved to seventh, while rookie Ben Kennedy dropped to eighth. Jeb Burton and Ron Hornaday, Jr. round out the top 10.

“To get my first win on a mile-and-a-half is awesome — that was a blast and I learned a ton. I had this marked down as a race that I was looking forward to and I wanted to win it so bad — cool to win with Project Pink on board. This is really surreal to me right now and it means so much to me. We had a really fast ToyotaCare Tundra at the start of the race, but it got really loose before that last pit stop. Eric (Phillips, crew chief) made a big swing at the end — he said everybody thought he was crazy with the adjustment he made, but it was perfect.” Erik Jones

“Just got beat, flat out. Congrats to the 51. Hate that it’s not the 54. We need a win. (It’s) frustrating, I hate finishing second so bad. Thanks to my guys though. I thought it was ours. Another KBM dominance for sure. We’ll go onto Talladega and try to finish one spot better.” Darrell Wallace, Jr.

“The KBM trucks had a lot of speed. In the second-half of a run I felt like we could keep up with them, but for whatever reasons it was lights out at the beginning of a run – we didn’t have the short run speeds we needed. It kept getting cooler and cooler, so you could run wide open more. During the second half of the race we had to lift more, and it really played into our hand and that’s where we made some ground. I’ve finished second and third here too many times, it’s good, don’t get me wrong, but it’s just aggravating. All and all a good night for this Menards team.” Matt Crafton, finished third

“It was an honor to carry “Charging Charlie,” the mascot for the United States Air Force Red Horse Squadron, on our hood tonight. We had a really fast Toyota Tundra all weekend at Las Vegas Motor Speedway. I was hoping we’d be the first to win back-to-back races here, but that long green-flag run just didn’t help us at the end of the race. After our last pit stop, the truck got really tight, and then the field was spread way out. This No. 17 team and the guys back at the shop have given me great trucks, and we are gaining momentum every week.” Timothy Peters, finished fourth

Up Next: The Camping World Truck Series heads to Talladega Superspeedway on Saturday, Oct. 18. Last year, Johnny Sauter survived the carnage and took the checkered flag ahead of David Starr as the race ended under caution. Coverage for the fred’s 250 powered by Coca-Cola begins at 12:30 p.m. ET on Fox Sports 1; the race can also be heard on your local MRN affiliate or SiriusXM NASCAR channel 90.

This writeup was done 2 days ago and I am the first commenter. That tells you all you need to know about the state of the truck series.