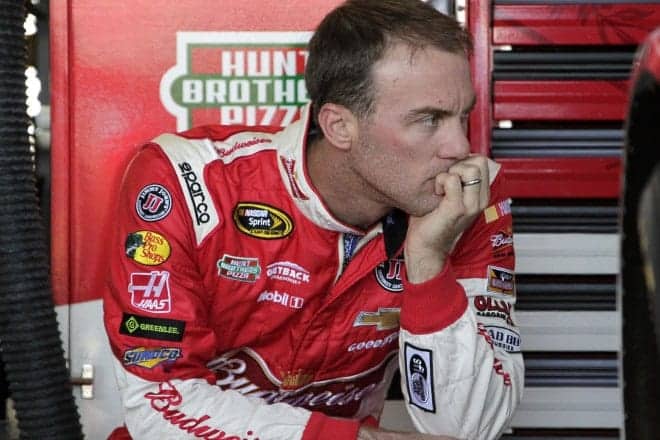 Dover International Speedway did its job: separate the contenders from the pretenders.

After 400 circuits at the Monster Mile, only 12 drivers remain in contention for the ultimate prize, the NASCAR Sprint Cup trophy.

Which drivers have what it takes to survive the Contender Round and which are lucky to have made it this far? That’s what Who’s Hot and Who’s Not is for. The next spot on the Cup calender, Kansas Speedway, will be a good indicator, and this edition shows what to expect.

Jeff Gordon is an easy driver to read.

Here’s an interesting statistic: Gordon has only four finishes of 20th or worse and has responded by visiting Victory Lane a race after every single one. Every time Gordon seems on the verge of normalcy – anything other than the high-level output he’s displayed in 2014 – he responds with a win.

Gordon joined Team Penske drivers Brad Keselowski and Joey Logano as Chase winners and automatically qualified for the Contender Round with a victory in the AAA 400. If Gordon’s recent form – three top 2s in four races – is any indication, he’ll continue to be a big-time player in the coming weeks.

A major part of that premise isn’t an assumption at all. Gordon has scored the second-most points at Kansas since 2013 and won there in May. The only driver ahead of Gordon on that list is Kevin Harvick, and it wouldn’t be surprising to see the No. 4 Chevrolet leading the way in Kansas either. Harvick is one of the drivers – Gordon, Harvick, Keselowski, Logano and Jimmie Johnson – who are most capable of lifting the Sprint Cup. Those drivers have been at the top of Hot or Not more often than not, but none are more confusing than Harvick. Dover showed why.

Harvick led the more laps at Dover than any other driver (the third consecutive race that he has done so) but finished 13th. So what gives? Well, Harvick experienced another sick twist of fate – a blown tire – that, at first glance, crushed yet another good showing. Still, Harvick was able to maintain the pace and finished on the upswing.

Of the drivers perhaps most capable of winning the title, Harvick and Johnson were left out of Victory Lane in the Challenger Round in place of Gordon, Keselowski and Logano – but make no mistake, they are among the best of the best right now.

So who has the best shot of joining the ranks of the elite? It’s easy to ignore Matt Kenseth, but there are several factors suggesting that Kenseth is more than capable of taking the next step towards a second Sprint Cup crown in Kansas.

Over the last five races in the Sunflower State, Kenseth has a better average finish than anyone. To go along with a pristine 5.4 average over that stretch, Kenseth also owns two victories and four top 10s. All of those statistics contribute to his 116.9 driver rating since 2012, also tops in the series.

Another promising sign: Kenseth rides into Kansas on the heels of a fifth at Dover. It was in the closing laps at the Monster Mile that Kenseth held his own against the so-called main contenders down to the wire. Kenseth’s ability to do that isn’t in question; he’s been able to run with them all season, but he hasn’t broken into Victory Lane yet. That’s right, with 29 races down, Kenseth has still not visited the spot he occupied on a career-high seven occasions over his wildly successful 2013 transition to Joe Gibbs Racing.

There’s still reason to believe that Kenseth will crack the winner’s circle at some point – he does have multiple wins in each of the last three seasons, after all – but even if he doesn’t, he could still compete for the title. Kenseth had only one victory during his 2003 title run and finished fifth in points in 2010 despite posting a zero in the win column. That’s the explanation for the rumors that NASCAR higher-ups amended the Sprint Cup rulebook to include the Chase format because of Kenseth: he’s that good at being good without winning.

Kasey Kahne bested Kenseth in the No. 20 team’s closest call of the season – a runner-up finish at Atlanta Motor Speedway – that propelled Kahne into the Chase. Like Kenseth, Kahne survived the opening round of the playoffs, but it wasn’t pretty.

Finishes of 13th and 23rd put Kahne 11th in points entering Dover, tied with Ryan Newman, just six points ahead of Denny Hamlin for the final spot. It was clear that he would need his A-game in New England to safely secure a spot in the final 12, but he didn’t. Kahne was good, but not great, before a green-flag pit stop backfired because of an untimely caution. The aftermath – the harsh reality of being two laps down – gave his future prospects a gloomy outlook, and another off-sequence stop made things even worse. Fortunately for Kahne, a later caution sequence allowed him to recover three laps, and he finished 20th, enough for a two-point cushion over the cutoff.

The driver he narrowly beat out, AJ Allmendinger, had no reason to be ashamed. Allmendinger bested Kurt Busch and Greg Biffle – drivers from esteemed organizations – as well as Aric Almirola over a pressure-sensitive three-race span piloting underdog JTG Daugherty Racing’s Chevrolet.

Allmendinger had a chance to advance, but his team never found the sweet spot in its setup. After struggling in practice and qualifying 28th, Allmendinger wasn’t able to find anything extra during the race before finishing 23rd, two laps off the pace.

But again, at least Allmendinger made the Chase.

If it weren’t for Allmendinger things might have turned out differently for Ambrose. It was at Watkins Glen International that Ambrose had his last great chance to break into the Chase grid. Allmendinger and Ambrose battled it out over the final laps before Allmendinger arose victorious, and Ambrose was left off the Chase roster.

Since that day in August, Ambrose’s Hot or Not stock has plummeted. Earlier this month, Ambrose announced that he would be returning to Australia at the end of the season to race V8 Supercars, and that was the bright spot. Over the last six races Ambrose has been one of the worst drivers in the series. His 29.67 average finish over that span ranks 31st among drivers who have attempted each event. That average is comprised of zero top-20 finishes and only one lead-lap finish.

It’s not like the No. 9 Ford Fusion is at a huge disadvantage or is falling apart often after the drop of the green flag. Ambrose has only one DNF over that span and his Richard Petty Motorsports teammate Aric Almirola made the Chase. Ambrose has been that bad and there is no way around it.

This is the worst stretch of his season and one of the worst in his time at the Sprint Cup level. Judging by his Kansas resume things might not get better for at least another week. In 10 starts, Ambrose has just two top 10s and has finished 20th or worse in two of the last three races.

No wonder Ambrose is going back to Australia.

Ricky Stenhouse is colder than a polar bear’s toes. He’s been that way all season long.