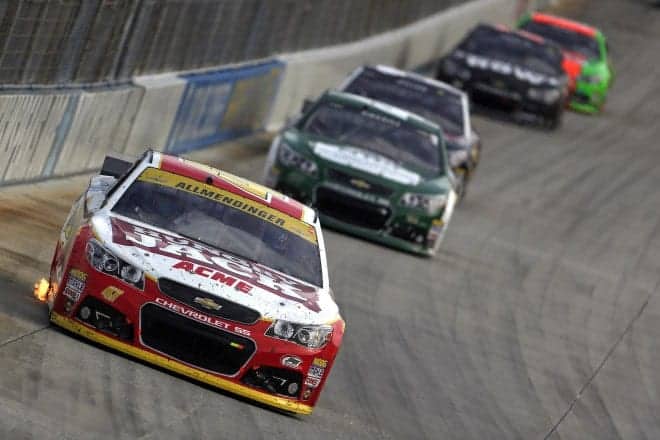 Prior to Sunday’s 400-mile race at the Monster Mile there was a fair bit of talk about what a dramatic race the first elimination contest was going to be. As it turned out, the race was extremely light on drama with our very own race recapper Mike Neff rating it (on his one to six scale) as follows: The result is a single, solitary, rancid can of Falls City that was pulled out of Miles the Monster’s posterior after the race. And that would be on one level at least an accurate assessment of what transpired at Dover. But for the fans of the drivers on and around the bubble it was anything but boring. One Kasey Kahne fan I spoke to this morning in the office described how he acted like a boorish child for much of the race and then he showed me his fingernails, which were quite literally bitten to the quick as he watched his favorite driver come back from multiple laps down and the verge of disaster to make it to the next round. Likewise for Denny Hamlin fans whose driver managed to get past a disastrous race at New Hampshire Motor Speedway and do what he needed to do to make the cut. So yes, it wasn’t a classic race — you could argue it wasn’t even a good race – but the race within the race, for some at least, was absolutely fascinating.

One of the most compelling parts of this new Chase format is the unknown. We don’t know how the format will play out – especially the final race at Miami-Homestead – nor do we know how each of the next two elimination cuts will affect those drivers folks are already furiously tipping for title contenders. The lack of data, or historical precedent, is an enthralling feature of this inaugural “new” Chase but following the reset and first elimination we do have a number we can put down as a baseline. For Kasey Kahne an average finish of 18.6 was enough by two points from the next closest driver AJ Allmendinger who had an average finish of 19.3. Two places on the track across three races was the difference. It’s a fine margin and one I expect will be even finer as we move toward the next cut. One thing I would expect is for that “safe” number of 18.6 to come down quite a bit for the second cut and then again as we head toward the season finale following the third cut. All season long it’s been all about the win. Now, more than ever, in crux time it’s about playing the points percentage game as drivers look to secure their Chase future.

Jeff Gordon has been on the “drive for five” for a protracted thirteen seasons. In that time he’s shown great consistency: finishing in the top five of the season standings on five separate occasions (including a second place effort in 2007) and never lower than 11th overall (2005). But what he hasn’t been able to do is to convert that reliability into a seat at the top table at the banquet. This year, though, might just be the year he finally gets it done. What is instructive to note is that by the old pre-Chase points system, Gordon would be some 44 markers clear at the top of the standings from teammate Dale Earnhardt Jr. and some 64 points up on the third place driver Brad Keselowski. Of course none of that amounts to so much as a hill of beans, nor indeed would it count for anything if he doesn’t accrue enough points over the next three races. But what it does show is that Gordon is getting it done week in and week out. If he can hold serve these next six races and two elimination stages, you probably wouldn’t want to bet against him in the final race of the season – a race he won in 2012. Yes, there’s a long way to go just yet but Gordon’s drive for five might just become a long awaited reality.

FOUR: NEXT UP, THE HEARTLAND

Next up for race number four of the Chase and number 30 on the season, it’s a second trip of the year to the one-and-a-half mile tri-oval of Kansas Speedway. This will be the 18th time that the Cup Series has raced at this particular venue and the second trip of the year. Jeff Gordon won the last race held at the Speedway in May whilst this time last year in the Chase, it was Kevin Harvick who picked up the checkered flag. “This has always been one of my favorite tracks.” Said Gordon of his then first victory of the 2014 season. “This was a very, very special win.” And just to show a nice piece of symmetry it was none other than Kevin Harvick who he held off over the waning laps to win it. For the 12 remaining Chase contenders, Kansas will be a crucial race. Run well there and it’s not out of the question you’ll run well at Charlotte. Two strong races would set you up for the all-important showdown on the high banks in Alabama at Talladega Super Speedway. With the local baseball team – the Kansas City Royals – making the MLB playoffs for the first time in 29 years, let’s hope it’s a good omen for a terrific race this Sunday.

And finally this week, a quick word on the next elimination venue: big bad Talladega Super Speedway. The drama we missed out on at Dover will certainly be there in full force at a track where you can lose 20 places between turn four and the start finish line. That could easily be the difference between moving on in the Chase and missing out. As I mentioned above, the next two races will be even more crucial knowing what a lottery Dega can be. Nowhere else do the nerves of the usually nerveless denizens of the Cup garage jangle quite like they do on the 2.66 mile Superspeedway and this race, perhaps more than ever before for those Chase hopefuls, will be an absolute nail-biter. I’m looking forward to it already.

Having Talladega in the stupid Chase is dumb and grossly unfair. Heck that whole race stinks, if you call a crashfest “racing”. Joke.

If I were a betting man, I’d gaurantee you that a contender we currently think will be one of the final four will be eliminated at Talladega. It makes for great drama but it’s a lousy way for someone who has been a factor all year long to have their season end. Unless it’s JJ.

Wow Danny, there are still people in your office that talk about NASCAR on Monday morning. I miss that Monday morning talk. I am the only person I know that still watches. I’m jealous.