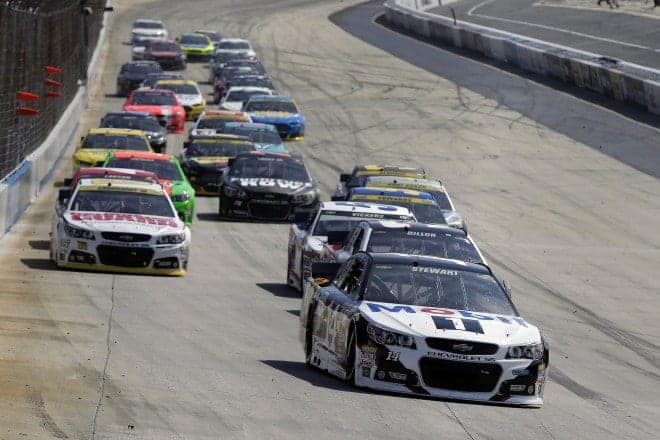 Not that seeing these four drop from Chase contention after the first round was any surprise, of course. In fact, for those of us who filled out our Chase Grid, this round was probably the easiest selection (though I’ll admit I had Busch going on to the next round).

I really do like the new Chase format, but the fact that there are no shockers, surprises, or otherwise any significance to the four drivers who were eliminated last Sunday at Dover says to me what I thought the second they announced the Chase grid format: there are not 16 championship caliber teams on the track each weekend.

Now, 16 different potential winners? That is absolutely an acceptable number, especially considering that only three drivers were able to sneak into the Chase without wins: Ryan Newman, Matt Kenseth, and Biffle. And no one is going to say those three aren’t capable of winning. They just … haven’t yet this year, for some reason.

When these 16 drivers are put on display on equal footing, though, anyone who follows the sport knows that they aren’t all necessarily equal. Heck, there aren’t even ten championship caliber teams in a given season, which was the original number for the Chase.

I know it’s the same in other sports. There are teams that everyone knows won’t make it all the way to the SuperBowl (or whatever the end-of-season game is called in other sports) and probably won’t even make it past the first round. It’s just the way it is.

Yes, I know it’s incredibly obvious that I don’t follow other sports. Shut up, you.

I’m not complaining about the new system or even advocating for another change. It’s quite the opposite. I love the new system and hope they leave it alone for a long time – if for anything but the sake of leaving it alone. It’s getting difficult learning new rules every two years. They start to blend together.

My point is that it just feels weird that four supposedly championship caliber teams fell out of the Chase and no one cares or is even surprised. Of course some fans wanted to see Almirola or Allmendinger pull out a Cinderella story scenario and move on to the next round against all odds, but no one expected them to. And they didn’t.

I imagine it will be the same this round. We’ll have one – maybe two – drivers who are surprisingly eliminated, but, for the most part, the Contender round will answer questions we already knew.

But we don’t watch for what we know. We watch because anything can happen and – like the commercials say – probably will. I just can’t help but wonder how the drivers on the negative side of that feel about it.

“I’ve heard that the Ward family wants to file a civil suit against Stewart, but how can they do that when a grand jury said he didn’t do anything wrong?” Harmony

The standards are much lower in finding guilt – or negligence, in this case – than it is for a grand jury. The grand jury was simply tasked with deciding whether or not the prosecution had proven beyond a reasonable doubt that Tony Stewart had committed a crime.

In the case of a civil suit, all the Ward family would have to do is prove that Stewart was even somewhat negligent in his driving. Was he going too fast for under caution speeds? Did he drive too close to Ward? The attorneys wouldn’t have to prove that Stewart was guilty beyond a reasonable doubt. They would just have to prove that there was more he could have done to prevent hitting – and ultimately killing – Ward. I would imagine that it would be difficult to not fault Stewart to some degree for what happened, no matter Stewart’s own insistence that it was an accident.

Stewart and the Ward family will likely wind up settling out of court. For Stewart, it would be over quicker and it would prevent the incident from being legally over-analyzed, something that has already happened way too much in the court of public opinion.

For Stewart, it’s about moving on. For the Ward family, it’s about righting what they perceive to be a wrong. The sooner both parties can move on from the incident, the better.

“Do the drivers not get bonus points for the wins in the Chase? I was looking at the points and they are all just at 3,000, even though Logano, Keselowski, and Gordon all won races.” Barbara

No, bonus points don’t accumulate after the Chase starts. If a driver advances, their points are reset to the next level (3,000 in this case, 4,000 in the next, etc.) but the bonus points for the wins are only for the initial reset of the Chase. After that, everyone is treated equal if they advance to the next round.

I think I would still prefer that drivers get bonus points for their wins. That way, if Brad Keselowski wins the first race of the round, he still has incentive to keep taking chances in the next two races rather than relaxing and not doing anything too risky. Why not continue to try and gain an upper-hand on the competition

I know drivers say they want to win every race, and I believe them. But making it so they essentially have to win – and keep winning – in order to win the championship is a recipe for excitement. I think NASCAR has that concept down very well, but I do wish they had kept the bonus points in the Chase for each individual reset.

“Why is Dover adding a higher catchfence? Did something happen that didn’t make it on TV?” Nicole

Not necessarily, but it sounds like the catchfence is part of just a full-scale renovation project for Dover International Speedway. Changes are expected to be made to pit road, as well as the addition of medical facilities for fans and SAFER barriers on the racing surface.

Honestly, I think it’s great that Dover is adding a taller and safer catchfence before anything major happens. I hate it when changes are only made after the fact, and Dover shouldn’t wait until a weakness or flaw is found in their grandstands to create a better one. In fact, it was probably the incidents related to catchfences in recent years (Carl Edwards’ Talladega wreck in 2009, Kyle Larson’s crash in the Nationwide Series race at Daytona last year, to name the most major) that caused Dover to consider making a change.

Good for them, though. Now I just wonder how many other tracks will follow suit.

I wonder if Summer will love it at the end? Also, your logic about the 4 removed is only half right. Can you please explain to me why Kasey Kahne and Denny Hamlin are hanging on by their nails? Their season thus far has been horrible. Kasey with that one “mircle” win, went right back to his 20-25 place finishing, and Hamlin won the crapshoot Talladega and nothing of notice has happened since. I think that shows a huge flaw in the system right off the bat. Summer you are the perfectly young type of young brain matter that the likes of Brian likes in his corner, he will fill you up with his way, and your job is to spread your newfound knowledge to the rest of the clueless sheep, you will be rewarded.

Of course Summer will love it at the end. Her opinion is always the same – everything NASCAR does is good, fans are stupid and should just enjoy whatever NASCAR gives.

The Easter Bunny
Reply to  JohnQ

Summer does NOT make up these questions!

JohnQ
Reply to  The Easter Bunny

If I am missing your sarcasm I apologize. If not, why can’t any of us find out how exactly a question gets submitted to NASCAR Mailbox?

You should not even have considered me. At the breakneck speed of five MPH I once drove a Crown Vic Police Intercepter into a hole two feet deep and twenty feet long that I NEVER saw deploying the airbags and knocking myself senseless. (Which I suppose could explain some of my posts)

The Easter Bunny is real, too.
Reply to  JohnQ

It was sarcasm. Of course she makes up the questions.

JohnQ
Reply to  The Easter Bunny is real, too.

Why don’t you leave your opinions about Tony Stewart at home. You have consistantly proved that you are incompetient as a writer and are a shill for nascar.

I wanted to see the bonus points for winning during the Chase continue, too. Seems really silly after all year of “winning means something more” to suddenly “winning means nothing more.”

Dan
Reply to  Kevin in SoCal

You know if they would be giving out bonus points for wins to be carried on from one round to the next Jimmie Johnson would have wins under his belt by now. The Chad and Jimmie Show doesn’t care about wins right now. Their strategy is to stay in the game until the end and then win the last race. See, no matter how hard BZF tries to keep them down that 48 team is not going to be beat. It will be interesting to see what ole Chad’s plan will be at Dega though.

There’s nothing to like with the new format and everything to hate. Winning a race should be its own reward. We can rank drivers on their wins during and at the end of the year. Tally them up and see who got the most, the 2nd most, etc.. But, when we talk about a Championship, then it becomes something different.

The auto racing world is much different than many of the sports it’s getting compared to. We don’t have head to head contests like baseball, football, etc.. We have the same group of drivers (mostly) battling throughout the year. Your Champion should be that driver/team that accumulated the most points throughout the year. That’s the only fair and reasonable way to do it as that would then have the driver/team that had the best year overall, being the Champion. Anything else is contrived nonsense.

As bad as the Chase has been, you at least tallied up the points from 10 races at the end of the year to assign the crown. Now, it’s been strictly structured to make it unpredictable (which is supposed to make it exciting) by making it luck-based. It’s a pathetic attempt to create an artificial excitement. It hollows out the substance of what a Champion is. The Championship now means nothing. Yes, nothing. Will the driver/team that accumulates the most points over the course of the year be crowned Champion? Unlikely. It will simply be the one who managed to survive through circumstances and luck.

And NASCAR wonders why it’s turning off its core fans. They can’t attract and keep new fans as quickly as they are losing their old, loyal ones. I just shake my head in wonderment and disgust.

But according to Summer’s self-imposed question to the NASCAR MAILBOX, we should sit back and enjoy the chase with it’s endless drama and excitement………………God help us.

Bill B
Reply to  Dennis

That about sums it up Dennis. No one is being fooled by this contrived BS.

Well said, Dennis. Capt Spaulding, I totally agree. Summer’s premise is always that any racing is good and that makes no sense to me.

Topic 1; I despise the chase. It reduces the championship to a series of crapshoots as opposed to rewarding performance over an entire season.

Topic 2; The Ward family. They will continue to pursue the lawsuit because their lawyer knows full well that Stewart Hass racing cannot afford the negative publicity that a long drawn out court case will produce. They will get their payday as so many do in our seriously flawed court system. I hope they can sleep at night.