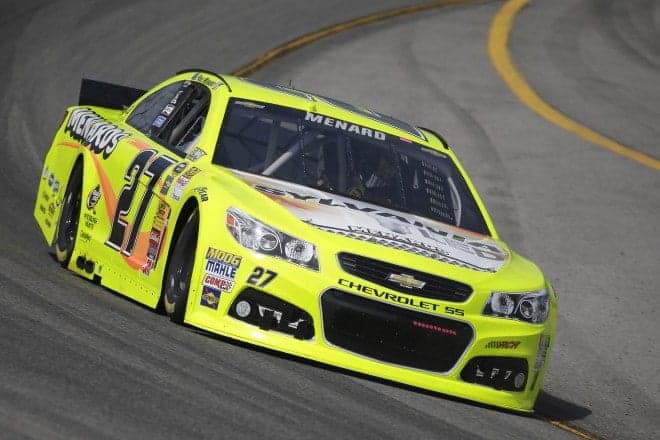 On Wednesday, Richard Childress Racing (RCR) announced that Richard “Slugger” Labbe, crew chief of the No. 27 Menards Chevrolet driven by Paul Menard, will assume a new role in RCR’s Research and Development department. For the next two races, Labbe will continue to serve as Menard’s crew chief, but he will leave the post following the Bank of America 500 at Charlotte Motor Speedway. When Labbe leaves the road, current Team Engineer Justin Alexander will replace Labbe as Menard’s crew chief.

Labbe is looking forward to the next step in his career in NASCAR.

“I’m looking forward to slowing down in my NASCAR career a little bit and spending more time with my family,” Labbe said. “This is a good move for RCR, Paul and the No. 27 team, and I’m going to be there to help Justin with the upcoming transition. With NASCAR’s new rules for 2015, this is a great opportunity for me to help RCR grow and be successful by helping out with their R&D efforts.”

Alexander, who has never served as a crew chief in the Sprint Cup Series, is very happy to take the leadership role.

“I appreciate the opportunity RCR is giving me to lead the No. 27 team and Paul,” Alexander said in a press release. “Working with Slugger has been a great learning experience and I appreciate him helping me make the transition into this new role.”

Alexander has only been with RCR since January. Prior to that, the 33-year old spent 11 seasons with Hendrick Motorsports in various capacities. Those capacities included serving as Jimmie Johnson’s lead engineer in 2005 and spending five years as Jeff Gordon’s lead engineer.