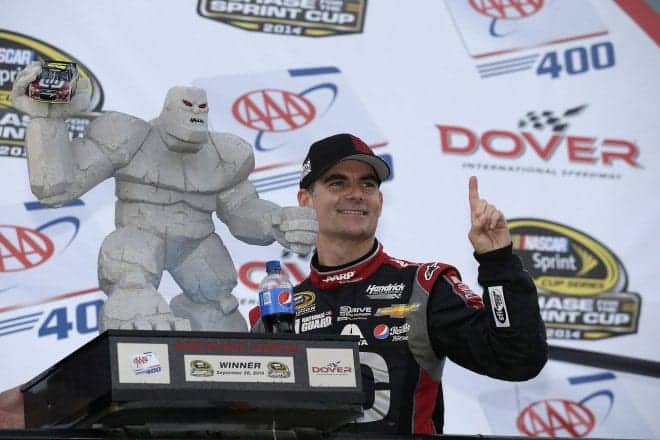 Well Dover was a letdown.  The rash of articles that posted on Monday and Tuesday that proffered analysis of the Dover race all seemed to hit on the fact that there was little in the way of anything exciting at the concrete oval.  These comments didn’t miss the mark.

It should be noted that the Nationwide race also didn’t seem to have much going for it in the way of excitement, except for a wreck that nearly put championship leader Chase Elliott in a big hole – but he recovered just fine and took third and furthered his lead.

So it seems that the whole weekend was a bit of ho-hum.  But hey, the new rules package is out there.

It’s difficult to determine the gap between expectations and reality that exists in racing these days.  While there is certainly a problem with trying to see what would seem like competitive racing, that being side-by-side instances at a time other than a start or re-start, the actuality is that it’s difficult to pull off such a feat.  There is always a preferred line (one of the problems with double-file restarts) and cars can maintain the close quarters racing for only so long before one has to give.

The problem with expectations, perhaps, is that all of us were looking (hoping) to see some kind of daring move, some kind of wow moment, especially with a driver who sat on the precipice of elimination.  Yet no one bothered.  Whether you’re a fan of Carl Edwards or not, his move at Atlanta a few years back, when he tried to pass Jimmie Johnson and failed, was pretty sweet, and is just what makes the sport interesting.  But in the Chase, it seems like drivers weigh the risk-reward scenario and choose to take a cautious approach.  That’s a bummer for everyone.

Happiness Is…Being Forgotten.  Sure, Jeff Gordon got to pose in the winner’s circle, got to do the hat dance, got to give the interview to ESPN, MRN and whoever else ends with the call sign N.  But really, the way the race was televised and the way the coverage that came after, the focus never seemed to be on the driver now sitting with 92 wins.  Instead, the focus moved to the four drivers who had been eliminated from the ‘postseason’.

Let’s touch upon a few things here.  First, the drivers were eliminated from the Chase, but guess what, they will all still be showing up at the track each week and collecting checks – so any kind of perceived heartbreak comes also with recognition that a) none of these drivers were likely to win the Cup and b) it’s not like they got sent home and aren’t allowed to race for the rest of the year.

Now, the other issue is that Jeff Gordon’s win wasn’t quite put in context.  Yes, he won, but it doesn’t matter as far as the Chase is concerned because for some reason (NASCAR’s infinite wisdom) the points earned by victories doesn’t carry over into the next rounds of the Chase.  Right, the whole thing just got that much more idiotic because Happiness Is though that winning was supposed to mean more and that winning is everything.  Except it’s not and a driver can cruise through, taking fourth place finishes and then pose as the champion at the end of the year.  Hm.

But let’s touch on the last point of Dover’s race.  Jeff Gordon now has 92 freakin wins.  Just a couple years ago it seemed like he’d be stuck on 87, that’d be that, and everyone would look back on a stellar career.  This year has changed that, and now there should be legitimate discussion about whether he might be able to get to 100, because even though he’d still sit behind David Pearson, 100 is a monster number.  There’s only one other current driver who has the potential to hit that magic mark, and that would be Jimmie Johnson, who currently has 69 victories.  So yeah, it seems that maybe this Dover win should have deserved some different kind of commentary, because though the race was a bit of a dud, and the field is reset, Jeff Gordon just keeps putting modern day records out of reach.

Happiness Is…Vegas.  What the hell was NASCAR thinking?  Everything about NASCAR’s decision to hold the Trucks race last Saturday night was wrong.  First, it’s not like the truck series is bringing in 2.3 ratings shares, so burying the race on a Saturday night in football season was, of course, the right time to schedule such an event.  Who knows how many people watched, but just as important, how many people even knew it was on?

Then there’s the fact that the Trucks are out there in Vegas with nothing so much as a support system from either the Nationwide or Cup series — which is to say that they had no ability to alleviate costs by cobbling resources.  So the governing body takes a series which already seems to be on life support and burdens them with blowing out money that they really don’t have.  Genius.  No wonder there was yet another short field.  This series is in serious trouble and deserves someone going over it with the eyes of a financier.  It’s either that or NASCAR could, ya know, share some of those millions of dollars they bring in from all of their Official Sponsors.

Happiness Is… Bitter.  This column was brought to you by vinegar and bitters.  Usually there’s something to be happy about, even from an ironic standpoint, but this past weekend illustrated far too many of the ills that plague the sport.  NASCAR is an easy target, like shooting the proverbial fish in a barrel, and every sporting enterprise has shown itself to have its foibles, the question that comes from these circumstances is, what does the future portend?

Let’s hope that the rest of the Chase provides some realistically good racing.

Yep not much to be happy about with regards to the state of NASCAR. They are serving us gruel and telling us it’s fillet mignon and we are left with two choices, eat the gruel or eat somewhere else.

That’s a good way to put it, Bill.

Yes, and that’s why I get my racing fix (i.e. spend my hard earned $$$) on ProCup, Southern All Stars, and other local/regional touring series. It ain’t fillet but it sure ain’t gruel, either. BTW, ProCup at Lonesome Pine Raceway, Coeburn, Virginia on 4 Oct.

Dover post race coverage centered completely around the immensely unpopular Chase, while completely ignoring a milestone win by an immensely popular driver. As does NASCAR, the racing media is increasing losing touch with the remaining fan base.

Those 4 drivers eliminated should be very happy they were not part of Wednesday’s embarrassing “press conference”. Any sting of being eliminated should have healed yesterday, once they saw what they missed being part of.

Interesting article in that it is entitled Happiness is and yet there is really not much to be happy about. I was happy about Gordon winning, but as pointed out, that was buried amongst all the “chase” talk, talk, talk. Blah. kb, I didn’t see any of that coverage and it sounds as if I should be happy about that.

Having the points for winning a race in the chase not transfer to the next rounds was even more idiotic than I expected.

Bill B, don’t you know, we all gotta drink the koolaid and get on board with Brainless’s bright ideas! Ha, no never mind, I’ll pass. I don’t like kool aid OR gruel.

Indycar is getting stronger and the Aussie supercar series should become more visible. This series is a joke. Maybe next year they can decide the championship with an essay contest.

GinaV24
Reply to  Don in CT

Don, do you know what channel are the supercars going to be on? I used to love watching the rally car races when they were on speed. I guess they moved to versus but I never remember to look at that channel.

Take a big ‘ol gulp of that kool-ade and you can plainly see that happiness is filling out your chase grid, Danica Patrick, the #3 car back on the track, Kyle Busch dominating the Nationwide races, and enjoying a race broadcast free of those anoying non-chase drivers. If you’re not completely giddy from all that happiness, well, have some more kool-ade and quit your bitchin’.

“Whether you’re a fan of Carl Edwards or not, his move at Atlanta a few years back, when he tried to pass Jimmie Johnson and failed, ”

That was at Kansas, not Atlanta.

Thanks for putting up the race of CARL and JJ at Kansas !!D— we don’t see racing like that anymore !! Is it the cars ” ??? CARL has sure had nothing car wise this year ! JJ is just kinda hanging in there ! I guess I had forgotten how much fun it used to be !!! No wonder I find myself picking up my crossword during the race !!! I love my races and MY CARL But — just watching that clip several times I think I finally realized We don’t see racing like that any more !! Is really SAD !!