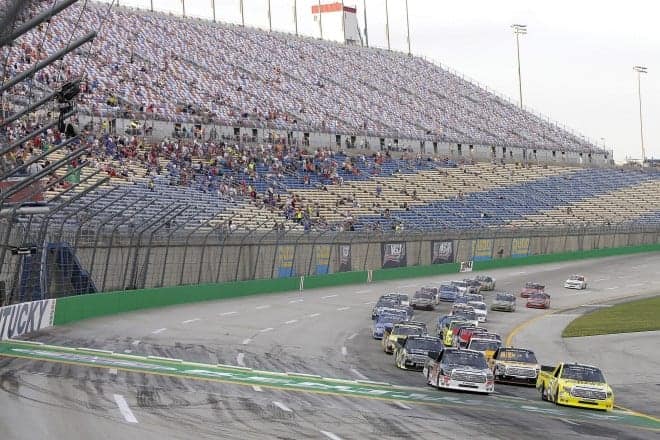 The last two races have seen young drivers beat out the veterans of the Camping World Truck Series for a trip to Victory Lane. 16-year-old Cole Custer broke the record for youngest winner in the Truck Series at New Hampshire Motor Speedway that was set by Las Vegas Motor Speedway victor Erik Jones late last season. The combined age of the series’ last two winners is a mere 17 years old, and they’re not the only ones capable of winning either. There’s a plethora of brand new 18-year-olds – and even some younger – just biding their time and waiting for the chance to run full-time in this division.

On the surface, the future of the series is certainly bright with so much raw talent ready to break into the top three levels of NASCAR. There’s just one problem, though. I was talking to a friend of mine that used to work in the industry a couple weeks ago about the state of the series as a whole, and the reality is that there may not end up being a Truck Series for these young drivers in the very near future.

Think about it for a moment. This season has been plagued by short fields, filling just five starting grids in 17 races – 29 percent, a number that’s only going to get worse before the end of the year with Talladega, Texas and Homestead yet to run alongside Phoenix and Martinsville. Compare that to even a year ago and the number is dismal at best. The tumultuous relationship between the Turner Scott Motorsports owners is not likely to end well, though I do hope I’m wrong about that because the loss of that organization would be a major blow. Add in the uncertainty that has faced Kyle Busch Motorsports in recent years when it comes to sponsorship and you’ve got a recipe for disaster that could potentially see another four – maybe five – rides just disappear.

Not convinced? Let’s turn back the clock a little. I already mentioned that, in the past, it had been more of a surprise than anything to find a short field in the Truck Series, and some of that began with the exit of Kevin Harvick, Inc. at the end of the 2011 season. At the time, the organization was fielding three trucks. Though one of those trucks was absorbed by Eddie Sharp Racing and another by Richard Childress Racing, those rides have since dried up as well, removing three quality trucks from the series.

Then, in mid-2011, Germain Racing ceased its Truck Series operations. Of course, it wasn’t that much of a surprise, given that Bob Germain ran much of Todd Bodine’s 2010 championship season out of pocket before throwing in the towel, but again, it was a blow to a series already struggling to have fields full of teams intending to race to completion.

Owners leaving the sport is bad enough, but the reason why they’re leaving can’t really be pinpointed to a single factor. It’s really a combination of things that have all snowballed and made the deficit nearly insurmountable. This season, Kyle Busch’s early dominance most definitely had an impact, but he’s far from the only reason since the series was going downhill long before now.

Beyond Busch’s presence, which has really only highlighted an ongoing problem, the purse amounts are abysmal. We’ll use Bristol Motor Speedway as an example since all three series were together that weekend. Race winner Brad Keselowski took home a whopping $42,820, while Bryan Dauzat, who completed just four laps before calling it quits, got $7,220. Compare that to the Nationwide Series where race winner Ryan Blaney scored $55,725 and last-place finisher Jeff Green took home $16,430, equivalent of a third-place finish in the Truck Series (Matt Crafton took won $16,385 for his third at Bristol). With purse money like that, it’s not even really worth running a start-and-park team in the Truck Series, much less a full-distance race where a team would need to pay for travel, lodging, tires, food, etc. for the crew.

And the problem goes deeper than just the purse money as well. If you’re at all versed in the history of the Truck Series, you’re well aware that it was built on the premise of running trucks on these short tracks that brought NASCAR fans of the mid-’90s back to the roots of the sport. All it takes is a quick look at the inaugural season in 1995. At that time, the longest track on the 20-race schedule was Phoenix and Milwaukee at one mile (not counting the road courses of Heartland Park Topeka or Sonoma), a far cry from what we have today. It was those tracks like Mesa Marin, North Wilkesboro and Indianapolis Raceway Park, to name a few, that the fans gravitated to. I mean, who wouldn’t want to watch these trucks race at mostly three-quarter-mile or smaller facilities?

The Truck Series simply wasn’t designed to run eight mile-and-a-half races in a single season, especially when there are only 22 events on the schedule. Yes, I understand that part of NASCAR’s intent when going to those cookie-cutter tracks was to open up the series for more fans, but frankly, the stands would fill if the series consisted largely of tracks one mile or less in length, with the occasional cookie cutter sprinkled in through a couple of major markets (Charlotte in particular).

The bottom line is that if the sanctioning body doesn’t find some way to breathe life back into the Truck Series in a hurry, there won’t be enough teams to even make it worthwhile running anymore. And that, my friends, is when I know NASCAR as a whole will be in a truly perilous position.

Here’s a question, if the chase is so damn fantastic why don’t they have it in the truck and NW series? That would really beef up the ratings and attendance….NOT.

paltex
Reply to  Bill B

NO CUP DRIVERS NO NATIONWIDE DRIVERS only truck racers. Let the little guys get some of the purse. Bush is only building his fragile ego. Not needed!

Could some of it be tied to the fact that they don’t run races regularly? They run a race and then skip a week or two, or even more. It is hard to keep track of the race schedule for people to watch.

Maybe the whole idea of racing stock cars with truck bodies on it is flawed to begin with. I believe its purpose was to draw Toyota in the sport. They wanted to sell more Tundra’s at the time and Nascar pitched this as a vehicle to do it.
But many people just aren’t interested and that’s not about to change. Full field or short fields wont matter.

Nascar has always enjoyed a supportive relationship with the racing press. That is not a bad thing until the organization makes serious errors that are not pointed out, or are even supported by the media. More articles of this type are essential to keeping Nascar vibrant. Sadly, it may be too late for the truck series. I caught a truck race in Nazereth PA. years ago. The field was comprised about evenly of Chevys, Fords, and Dodges. There were no Cuppers entered and , surprise, the race was competitive from green to checkers. It should surprise no one that old time fans have not embraced Japanese truck racing dominated by a Cup driver. The only thing that should surprise anyone is that any business would continue to spend advertising dollars sponsoring events no one watches. Should NASCAR continue to refuse to acknowledge that Cup drivers are killing the lower series the demise of the NW series will quickly follow. Finally, this is one of the best articles I have read this year. Keep it up.

I forgot about Nazareth. It was certainly suited for Busch/Truck races. But, alas, the cancer known as ISC got ahold of it. Does it even exist anymore?

I read it has no stands and they placed dirt piles on the track, which were said to be there but weathered 4 years ago, as far as Nazareth Speedway goes. I can’t watch Truck races, since we don’t have cable TV at home, but I look up the results to record in my blog. In the season, it’s a NASCAR blog, but in the off-season, I still blog, but focus on other topics more. If there’s some NASCAR off-season activity, like a test or a thing like Acceleration Weekend or Fan Day that happens right before the season.

It’s sad because the Trucks often produce the best race of the weekend. Plus, it’s fun to see new drivers entering the series and seeing how they do. Someone commented about truck bodies on race frames being a bad thing. Have to strongly disagree. It’s fun to see “trucks” out racing and with their vastly different aerodynamics they produce some of the best racing we see.

I noticed when NASCAR signed their new TV contract, writers mentioned the current breakdown of TV revenue given the 3 major NASCAR series. The Truck series portion was so small I first thought it was a typo.

While Kyle Busch is fun to watch go three wide on the outside and make up a bunch of spots on a restart, it does get tired watching him dominated Truck and Nationwide races.

Dennis, my comment was based on the fact, that while you and I may find “truck” bodies on stock car chassis interesting, the majority of people don’t. They could have gotten the same results with any bodies. Plus, it was just a vehicle to draw in Toyota. That however has worked well for Nascar.