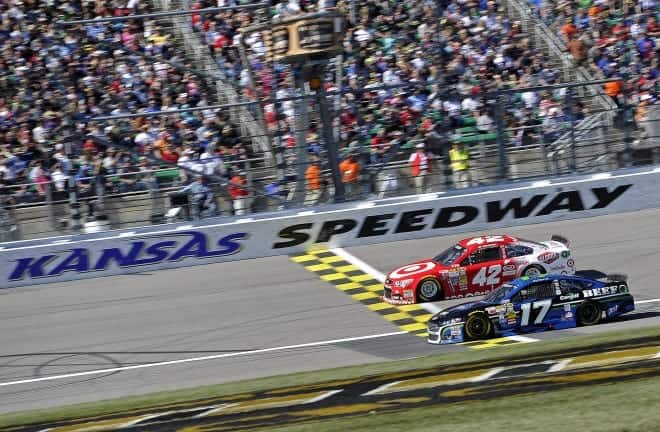 Two NASCAR drivers, and only two have made it through the first four Chase races unscathed. One of them has already won twice, boasts an average finish of 2.5 and has won nearly twice as many races, this season as the rest of his Cup career combined. The other, while not having won yet boasts two runner-up results, a third and looks more like a title contender, despite having “missed” the postseason than the vast majority of drivers who made the cut.

This duo? Joey Logano and Kyle Larson. Their average age? Just 23. Put side-by-side, in a lineup with their peers and the guesses on how old they are might drop them to oh, about 17.

All kidding aside, if you had told people, hours before this year’s Daytona 500 these two would be the stars of NASCAR’s postseason show most fans would have assumed that was a joke. Heck, some were still learning Larson’s name, a Cup rookie entering the series with plenty of buzz but with a resume lacking NASCAR victories. Larson had just one win in Nationwide and Trucks, with that coming at Rockingham, as he entered 2014 and was aligned with a middling Cup program in Chip Ganassi Racing. Over the past several years, we’ve seen plenty of drivers jump through the ranks, with a higher degree of success in the “minors” only to fizzle out on the Cup level.

Logano should know. A lone victory in the Nationwide Series, at age 18 propelled him to the Cup Series, full-time replacing Tony Stewart in Joe Gibbs Racing’s No. 20. A championship run was expected, but what we got instead was a teenager not ready to grow into the shoes custom fit for an entire generation. It took five years, a flyer from Roger Penske, and the perfect crew chief chemistry in Todd Gordon to finally turn things around.

And turned things around they have. With five wins, including two this postseason Logano sits atop the standings, armed with immunity that pushes him into the next round of this new format. It’s a precious commodity, one that allows him to breathe easy through Talladega’s terrifying Russian Roulette. Armed with a ticket to the final eight, he’s in strong position to advance further on a day where three of the title favorites, including teammate Brad Keselowski, wrecked their cars – and potentially their dreams of holding up the hardware in Homestead.

“When I see other Chase guys having troubles, that’s when you say, holy cow, this is really about a solid finish here today,” Logano said after taking the victory. “[But] you dangle a checkered flag in front of me, I’m going to go.  We were able to have a fast enough car that I knew we could do it.”

Whether Logano can take the next step, from contender to champion remains uncertain. But at age 24, Logano is as old as Jeff Gordon was when the “Rainbow Warrior” took his first title out from under Dale Earnhardt, Sr.’s nose. Most pundits expected him to wilt that year, Earnhardt’s veteran experience and the quest for a record-setting eighth title taking precedence. As with most rising youngsters, no one quite realized Gordon had the upper hand all along until he rode into Atlanta, that year’s season finale with the title all but clinched.

Logano still has a long way to go, even with Keselowski, Earnhardt Jr., and Jimmie Johnson currently outside the top eight. Another top rival, Kevin Harvick, leads the most laps virtually every race but can’t stay in front for the last one. There’s no doubt the driver of the No. 22 Ford has been the most consistent in the Chase by comparison, acting like the veteran who’s been here before. For the first time, in a career supposed to be filled with these moments Logano is out front and center as NASCAR’s superstar. The only question is whether he can handle the pressure, move forward in a period that can potentially define him.

That’s important, for it’s Logano who’s supposed to be around in ten years to carry the torch, to keep winning when most of these competitors will be well past their prime… or so we’ve been told. It’s Sliced Bread who should be slicing the field to pieces in 2024, at age 34 when Johnson, Gordon, and Harvick are either retired or halfway out to pasture. The ability of him to build a fan base, to realize the potential others saw in him becomes crucial in a sport where the ability to breed future stars has come to a screeching halt.

Larson, too, is trying to break that trend, a driver who’s been called a “young Jeff Gordon” and praised by none other than the four-time champion himself. He now has three runner-up finishes, in a short Cup career and has developed a bell curve consistency for getting better over the course of a race. Early on at Kansas, it was teammate Jamie McMurray running loops around the competition, leading 27 laps and showcasing CGR’s impressive handling package on “cookie-cutter” tracks. Larson hung back, towards the back half of the top 10 but when the laps wound down? It was McMurray limping, to the pits with a tire problem while Larson sliced through the top 5, tiptoeing to second before his bid to catch Logano ultimately fell short.

“I thought me and Joey were dead even there at the end,” he said afterwards. “It was hard for me to gain on him.  We would go within a hundredth of each other it seemed like on every lap.”

So Larson settled for second, keeping him relevant during a time when most non-Chasers simply fall off the map. It’s not a question of if, but when he’ll take the next step and considering his performance, most drivers in the playoffs are thrilled the youngster had just enough bad luck to miss the cut.

“The way we’ve been running,” he proclaimed, “We want to be top 5 every week.”

It’s a lofty goal for a driver who’s just 22. But with Rookie of the Year well in hand, having finished as top freshman in 21 of 30 races it’s the next step in a career that’s accelerating quickly.

So Larson joined Logano, leaving Kansas in the limelight as two names people need to pay attention to. In a season where fresh faces have fallen short, and on a day where the big names had brutal luck it was an unexpected – and pleasant – surprise.

Maybe it’s me or the way this was written, but Larson’s NW win came with him as a Sprint Cup driver in the NW series at the age of 22. I don’t believe what others say about a rookie Cupper getting a pass in NW, especially after Saturday’s race he took out Chris Buesher. without a mention of Chris or his team during his interview. CB has taken a hit in the points…Courtesy of a Cupper. I found the lack of mention, self serving and showing no class. Usually whether it is heartfelt or not a mention of the innocent victim is usually stated in the “what went wrong interview”. My two cents.

Agree as well. Boxers do not view sparing partners as competitors so there would be no reason to apologize for knocking one down. As the NW series has become nothing more than a practice session the Cup drivers view the series regulars the same way. Because the racing press has embraced Larson they will be slow to criticize him. It’s human nature.

Obviously for the sport to grow there have to be up and coming drivers. I agree with kb that Larson is still a CUP driver and so earned his win with that status (again taking things away from the NW regulars) so that doesn’t make me excited.

While I am enjoy watching Larson race in Cup (at least so far), I just can’t warm up to Logano so for him to win the crapshoot this year or any year doesn’t matter to me. That’s one of those chemistry deals I guess.

I like Larson and Logano but don’t congratulate either of them for victories in the Nationwide series. However, I blame Nascar, and not the drivers, for allowing cup drivers to race in the Nationwide series in the first place. The drivers do what their sponsors pay them to do, and I’m sure if Discount Tires wants Logano in their NW car, Joey has no real choice in the matter. The same goes for Larson and Target. These guys are just doing what their bosses are telling them to do

Oh I agree, they are doing what they are told. Blame the system not the driver.

I’m a Joey fan so I hope he wins the title or is at least one the Final Four.

I hope Joey wins it too, just to hear Kyle Busch and Denny Hamlin cry like the babies they are.

I agree, as childish as it sounds. I feel it would be just vindication for the years of bullying by those two Logano had to endure.

As desperate as the Beach Boy Bubbas are to bring in younger fans (and failing miserably), they’re going to do their best to have the media hype the “youth movement”, which means little to no criticism of a young driver with some talent who can put a car into the Top 10 on a semi-regular basis in the Cup series.

” But with Rookie of the Year well in hand” Really? And exactly how many other rookies had competitive cars?
Just another grasping at straws moment. Long term contracts, and PR campaigns make sure that the usual suspects continue on year after year.