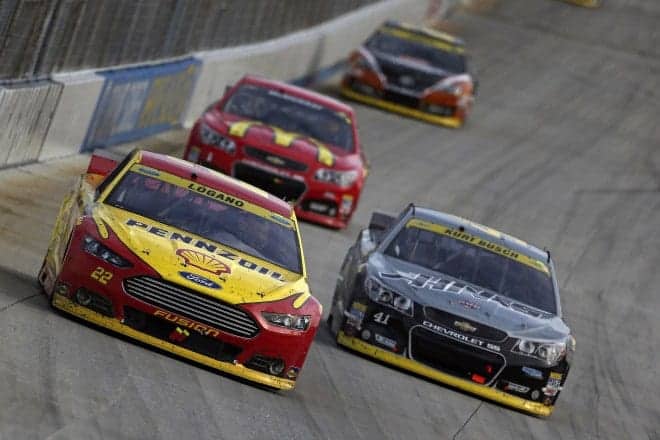 Welcome to the Frontstretch Five, a brand-new column for 2014! Each week, Amy Henderson takes a look at the racing, the drivers, and the storylines that drive NASCAR and produces a list of five people, places, things, and ideas that define the current state of our sport. This week, Amy says that we have learned a few things from the Chase so far.

1. It’s not really about winning.

While winning a race is a nice perk, especially in the second round where Talladega looms as the eliminator, it’s not necessary. In fact, for some teams, the risk of mixing it up for the win is greater than the reward of the win itself. A solid, consistent performance is proving to be more than enough to move a team through the rounds, and that appears to be what several of them are concentrating on. While you may see more urgency in the third round as the field prepares to cut to the final four, it’s not going to be the all-out racing some are expecting. The guaranteed spot in the next round is important, but it’s not the only way to get there and the teams know that. It’s better to settle for tenth on a day where several of the competitors are having some bad luck than to race for the win and put the team in a position to be playing catch-up the next week. That’s not great for the fans, but it’s the reality of this format.

2. But not losing is critical.

You don’t have to win to move through the rounds, but you do have to avoid trouble. For some teams, that means not racing very hard. For drivers like Jimmie Johnson, who suffered from issues at Kansas, the pressure is on to win this week in Charlotte. For most of the field, it’s business as usual. Racing to not lose, rather than to win, is not a good long-term mindset for a team, and it can cost them. But the points reset so often in this Chase that there is no long-term mindset. The play-it-safe tactics several teams are employing in the early going makes sense from their standpoint, but it’s hardly compelling for fans. Fans don’t go to a race to see the guy they cheer for content to drive around in tenth place, but for the team, that kind of racing could pave the way to the title, so they’re going to do it.

Could team orders come into play here as well? Well, sure. It’s easy to help out a teammate with a slow pit stop here (with obligate chewing out of the team on the radio for authenticity), a tap to the competition there (followed up, of course, by a sincere apology on the radio to divert suspicion). Has it happened already? Perhaps. Certainly nobody is going to admit to it. There are teams with a slightly shady history when it comes to teamwork, and when their drivers are involved in an incident, it does raise questions. Whether NASCAR is ready for the answers is another story.

3. Don’t expect a free-for-all in the elimination races.

If Dover was any indication, the elimination races won’t be particularly wild. Sure, there will be a few guys going for the win, mainly the two who have already won in the round and are guaranteed to move on already. A couple of drivers on the edge of elimination for whom the win is a last-ditch effort to move on might also be on the move. But for the most part, these race won’t look much different from any other, and that’s not really a good thing for NASCAR, which is counting on high drama to reel in fans. The real low point here could be Talladega, which is likely to feature the contenders riding around trying to avoid trouble. It’s still a giant crapshoot, but a crapshoot should not be confused for a good race.

4. Team Penske is the team to beat, at least so far.

Complain all you want about the restarts and the side skirts, because the reality is that Joey Logano and Brad Keselowski have hit on something that nobody else has. It’s good for the sport to have a team able to find an advantage and peak at the right time. While an organization flexing a lot of muscle might not provide the drama of a multi-team battle, it does provide a potentially polarizing situation, and that will get people talking about it. Banter between observers about the legality of the flared side skirts or whether Logano is getting away with jumping the restarts means people are talking about NASCAR. It keeps the sport relevant in a sea of football and baseball playoffs, and that’s got NASCAR grinning.

5. But it’s better to be lucky than good.

Don’t hand that trophy to Keselowski or Logano just yet. The nature of this Chase means that they can be the best all year – and they have been, for the most part – but because just one race ultimately determines the champion, the best driver all year is vulnerable to losing the title with one stroke of luck. While it’s true that teams can make their own luck, it’s also true that someone else can take it away in an instant. I’ve already said that the door is open for team orders, and that will continue to be true. A well-timed slip could take out a top contender and help a teammate. That’s a little unsettling, and there’s also an even greater possibility of something that’s truly an accident putting an end to what should have been a solid title run. The new Chase leaves too much to chance without doing enough to protect a team with a truly stellar performance. The sport will have a champion who was best in one race… but will that be the best driver of the season?

Jeez Amy, if by you mean some complaining that Logano got the best of them on restarts, then you must mean they got beat and you are correct. Nascar had nothing to say about anything. No validity there, other than sour grapes, unless of course you are a fan of those on the loosing end. Logano has been a beast the past couple of years at restarts. now he is turning those opportunities into wins, good for him.

As for the “skirt” issue, sour grapes again. Team Penske by virtue of winning a lot. had more than one car go thru a fine tooth comb inspection and nothing “illegal”. But it isn’t Penske..Jeff Gordon very recently complained about Denny Hamlin rather colorfully on the radio about his “skirt”. Come on Amy, throwing out sour grapes in your column may give you more words, but what does that prove or promote? And to make it sound like teams are “cheating” after having consistency all year is not worthy of your title and the column you write.

It still strikes me as funny that some think that a driver won’t try and win the race. If the car is capable then they will try. When you try and take more than the car can give, then you crash. Some drivers will, of course, push harder than others and often pay the price (I’m looking at you, Kurt Busch). But, if tires become a problem, then you may see guys become a bit more conservative. We saw Harvick pull into the pits early giving up 3rd place. He thought he had a tire issue. Didn’t make sense to take a chance on a blowout and get virtually no points. But, it did take away his chance to race for the win.

This stupid emphasis on “winning” that Brian’s taken this year is truly pathetic. Winning has always been the goal and always will be. It’s its own reward. You get first place money, first place points, and big trophy and all the glory. And, yet, Brian would pretend that the drivers weren’t truly motivated to win unless he made that a free pass to the Chase. Ridiculous.

The fact that while being interviewed, the non-winning drivers would mention that it was a good points day was merely them trying to put a positive spin on missing the win. It sounds good for the sponsors. It is good to try and keep morale up on the team, etc.. No where should that be interpreted as “we didn’t go for the win”.

I am SO hoping that Joey Logano wins this championship…

and # 5 sums up the major reasons to thoroughly and completely hate this version of the chase.

JohnQ
Reply to  Don in CT

Automotive Mud Wrestling! Brilliant, wish I thought of it. I was thinking of it as V8 Roulette.

Can’t wait for the non-race-winner-finished-8th at Homestead, Cup Champion to be crowned. Go 31 or 20 teams!!!! Would it be grand karma for the 20 and 31 drivers to be “battling for say 17th at Homestead for the title due to Denny Hamlin and Kasey Kahne making it through to the finale and having issues. Since these two drivers where “blamed” or held responsible for the atrocity that is the Chase. All the season’s fastest teams looking on battling for 5th? It could happen and might be the best thing for NASCAR as the France family might actually take stock of how poorly run NASCAR is and boot Brian boy out to Cambodia or someplace as he single handily killed the cash cow. If I was Fox and NBC I would be very afraid of what my 8.2 billion bought me. The last TV did not help attendance, TV viewership or interest at all.

What we know about this latest, bestest revised version of the not-a-playoff playoff is that it is truly a crapshoot, and wins don’t mean any more than they did before. Wish the emphasis was back on each individual race again instead of all the focus on the ‘title’.