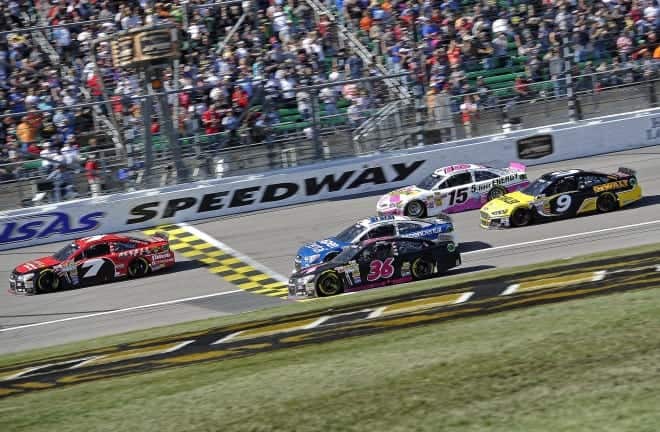 When the new Chase format was announced, no other round instilled so much fear as that of the Contender round. The Contender round involved the treacherous and unforgiving Talladega Superspeedway, a track known more for its crapshoot tendencies than its exciting racing. What’s worse is that Talladega is the final race of this round, adding pressure to the Chase drivers to win a race in order to confirm their advancement on to the next round. Put yourself in a bad position before Talladega and you risk getting caught up in the big wreck, potentially ending your Chance chances before the next round ever even starts.

Talladega could still hold huge implications for the Chase…

…but who would have thought Kansas Speedway would be the track that would throw everyone a curveball?

Let’s be honest. Kansas isn’t the most exciting track on the schedule in the minds of race fans. In fact, if they had to rank the tracks in terms of excitement, I would imagine the 1.5-miler would be towards the bottoms of people’s lists. While it has a history of some exciting finishes and dramatic moments, it generally doesn’t have a good reputation from the television audience, but fans who attend the track tend to love it, which is a different story entirely.

However, last Sunday at Kansas may have changed the Chase dramatically. As many of you well know, the bottom four at the end of each round are eliminated from contention. Though Kansas was only race one of three for the Contender round, already there are several championship caliber drivers at the bottom of the list.

The bottom four, from ninth to 12th in order, are Kasey Kahne, Brad Keselowski, Dale Earnhardt, Jr. and Jimmie Johnson. The four of them have combined for a total of 12 wins this season, and at least three of them (excluding Kahne) were all favorites to win the championship. I don’t know how many of you filled out your Chase grids, but from all the ones I saw, almost everyone had Keselowski, Johnson, and/or Earnhardt going into the Eliminator Round. So to have all three of them in danger of being eliminated from the Chase is a big deal.

It isn’t an exaggerated concern either. The separation from eighth and the bottom three is actually fairly substantial. Keselowski is 22 points back from eighth place Jeff Gordon, Earnhardt is 25 points back, and Johnson is 27 points back. That’s equivalent to 22, 25, or 27 positions on the racetrack they have to make up on Gordon, and that’s not to mention the drivers even higher in the standings. Sure one could argue that those three are better than most of the competitors (their wins column proves that), but they can’t just finish better than their competitors. They have to hope for their misfortune.

Either way, it’s looking more and more likely that at least one, if not more, of the championship contenders that everyone had at the top of their list at the beginning of the Chase isn’t even going to make it to the next round.

“So I know that Xfinity is owned by Comcast, but is Comcast a part of the series name too or is it just Xfinity? The new logo seems to show just Xfinity but the articles themselves generally say “Comcast Xfinity” or something. What is the official, official name…?” Meaghan

The official name is the NASCAR XFINITY Series. Comcast isn’t in the official name and the references you are seeing are likely involving the affiliation of XFINITY to Comcast (for instance, “Comcast’s Xfinity brand”).

However, the official name or references to the series will not invoke the Comcast name or brand. While I’m sure the company will be involved in much of the work that goes into the marketing and sponsorship program, the actual visual elements of it only involve XFINITY.

Speaking of the new logo, isn’t it kind of cool looking? I liked the new logos when they unveiled them a few years ago and I’m glad they stayed with that “slanty” trend. It looks very modern. Plus, with that giant red Xfinity brand, the logo looks very bold. And doesn’t the name itself just sound kind of cool anyway? I think if they inserted Comcast into that, it would sound clumsy. That’s no offense to Comcast, but Xfinity is just a better name for a racing series.

However, I’m sure I’ll struggle with the transition like everyone else. It’s not like the Truck or Cup Series where you don’t necessarily have to use the sponsor name to reference the particular series. However, if we were able to transition from Nextel (or Winston) to Sprint, Busch to Nationwide, and Craftsman to Camping World, I’m sure we can adjust to this change too.

“I saw that Trevor Bayne is making his “debut” this weekend at Charlotte… but how is that possible if he has already won the Daytona 500?” Deborah

All of Bayne’s previous NASCAR Sprint Cup Series starts have been with the Wood Brothers, including his Daytona 500 victory back in 2011. While Bayne has raced for RFR in the Nationwide Series for a long time, he has never actually raced in Cup for the organization.

Bayne will be driving the No. 6 RFR Ford this weekend with Bob Osborne atop the pit box, though the team didn’t announce whether it would be his only race or

not. This start is in preparation for 2015 when Bayne will drive the No. 6 full-time for RFR in the Cup Series.

Bayne will have to qualify on time, though, so it’s possible he may not make his debut after all. Unlikely, but possible.

“I keep seeing this new TV deal advertised as some sort of second coming for the sport or whatever. Like it’s the best thing in the world and that no other sport has this kind of marketing relationship. Do you know what other sports get in TV deals and if this new one is at all close to or better? I just can’t believe it is as fantastical as they are making it out to be.” Jeffrey

Well first let’s look at the new TV contract for NASCAR. Next year, a 10-year, $8.2 billion TV contract with FOX, NBC, and NASCAR. Sounds pretty substantial right? After all, those are two major television networks that are willing to invest billions of dollars into the sport. That has to be some sort of record, right?

Except ESPN and Turner Sports just reached a deal with the NBA to pay the league $2.7 billion annually, which is three times what the previous agreement was, an agreement that was already above what NASCAR’s next TV contract would be.

Any increase is a good increase for the sport, so this isn’t a complaint from me. Just the facts. However, NASCAR is obviously not nearly as big of a draw for TV networks as other sports. The numbers are even more inflated and substantial for the NFL and are comparable in several other sports. Plus, the fact that ESPN is dropping out can be potentially seen as a negative considering that, even with FOX Sports 1 on the tube now, they are still easily the most popular choice for sports programming right now. So, in summary, the self-proposed “worldwide leader in sports” isn’t interested in NASCAR anymore.

Still, the investment that NBC and FOX are making into the sport is promising and exciting. NASCAR doesn’t have to be as popular as the NBA or the NFL to be successful, and probably never will be anyway. As long as they keep making strides and companies (and fans) remain interested in spending money in and around stock car racing, the sport will be around for a long time to come.

ESPN was never interested in NASCAR anyway. They payed for it because at the time it was a big draw. Outside of the races themselves and NASCAR Now ESPN never devoted any time to NASCAR unless it was the Champion’s tour or something bad happened. I say good riddance. I’ve seen NBC coverage of open wheel and they at least care about racing.

“Any increase is a good increase for the sport”

Not if you have to sell your soul in the process,

The Imaginary Mailbag
Reply to  Bill B

Yeah and that ship has already sailed.