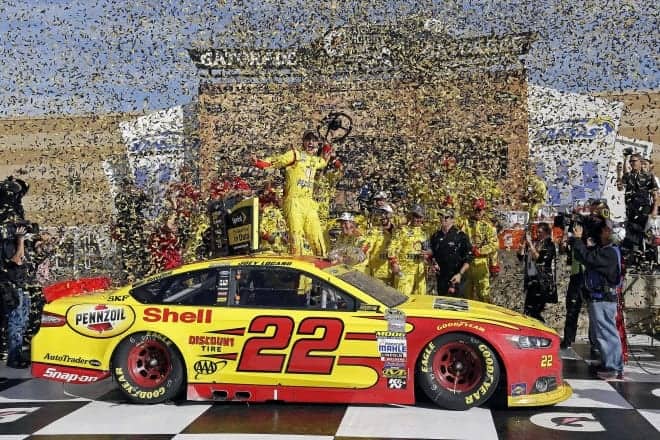 Team Penske continued their dominating performance during the Chase as Joey Logano captured his fifth win of the season, second in the Chase and locked himself into the eight driver Eliminator Round. The Penske duo of Logano and Brad Keselowski have combined to win three of the first four Chase races.

Many thought Talladega would be the wild card race in the Contender Round. After Kansas, however, a number of Chase drivers have used their “mulligan” including Jimmie Johnson, Dale Earnhardt, Jr., Kasey Kahne and Keselowski, who were all involved in accidents. Kevin Harvick, Matt Kenseth and Jeff Gordon had issues but were able to rally and finish 12th, 13th and 14th, respectively. Four drivers (Joey Logano, Kyle Busch, Kyle Larson and Ryan Newman) from the top 10 in Power Rankings after Dover finished in the top 10 at Kansas, and only three of them are in the Contender Round of the Chase.

The four drivers currently outside of the top 8 in points are as follows:
Kasey Kahne
Brad Keselowski
Dale Earnhardt, Jr.
Jimmie Johnson

A number of teams are looking for better results this weekend at Charlotte, as they are all aware what looms next weekend at Talladega. Before the sparks fly Saturday night under the lights, see if your favorite driver survived Kansas and made the top 15.