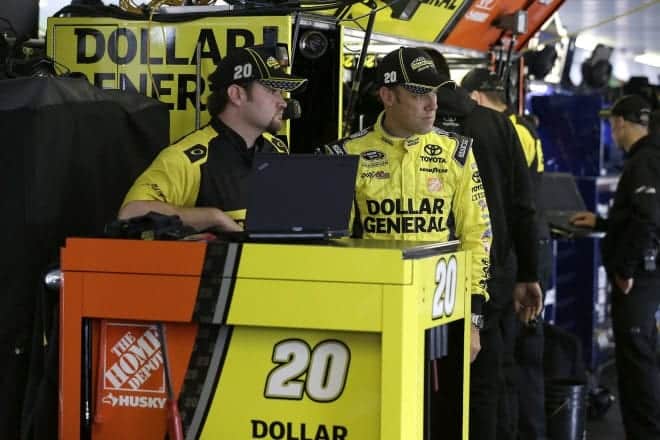 The more I think about all this elimination crap, the more I hate it.

On one hand, it could be a Godsend. On the other, it could show Brian France and the top brass in Daytona that they are indeed dumber than a box of rocks.

I’m praying for the latter.

Of course, it’s all been said before that surely, when it comes down to it, the true champion will be crowned at Homestead. But wait! Jimmie Johnson crashed? Dale Earnhardt, Jr. crashed? Brad Keselowski crashed out too!? OMG! Who’s sweating it out now? Surely this genius new grid can’t be manipulated… or can it?

Well, let’s use Ryan Newman’s take on it. Newman and team, as it was reported during the race broadcast, have got it figured out that, to advance to the next round, all he has to do is finish eighth or better the next three races and he should be good. Newman does have a degree in engineering after all, so he ought to know.

And how ironic is it, that just about a decade ago, it was Newman who was crying foul because he’d won eight times while the champion, Matt Kenseth, had won only once? Where is the emphasis on winning now?

Speaking of winning, as it stands now, three drivers that have a combined total of 11 wins this season are now in the position that with one little bit of bad luck over the next race or two, they could be eliminated. Mean while Newman, Kenseth, et al could just conceivably set it on cruise and let their good luck – or the bad luck of others – advance them on while the likes of Keselowski, Earnhardt and Johnson fall by the wayside.

Yeah, I know, it will never happen right?

Let me check my schedule – oh, here it is! Yes, next two races are Charlotte and Talladega. Oh, sure, luck is never a factor at those tracks. Those top guys should be safe.

Folks, I’m not gonna sit here and do all the math for you and list all the various scenarios. I’ve neither the time… OK, I do have the time but I certainly do NOT have the inclination to do so.

For now, the season’s other five-time winner, Joey Logano, is safe and advances on, and does not have to worry again until Martinsville. But Keselowski, Johnson, Earnhardt and even four-time winner Jeff Gordon… yeah, they gotta sweat!

Meanwhile, guys like Newman, Kenseth and even Carl Edwards – all of whom, let’s face it, have NOT been having anything close to a championship year – have a legitimate shot at winning this fiasco. Is this how you want your champion crowned?

No, the old system was not perfect. As I’ve said many times before, it could have used a tweak, namely just 100 points more for a win than second place, but it did award consistency as well as wins, and the truth of the matter is, in this particular sport, consistency IS an important part of the overall picture. And before all you nice people start saying hateful things because, in 2003, Kenseth did do exactly what I am preaching against now, just remember one thing (and go back and look at the stats): while Kenseth averaged a 21.3 starting spot, his average finish was 10.2 with 2 DNFs  Meanwhile, Ryan “The Rocket” Newman (when’s the last time you heard him called that?) averaged a 6.7 average starting spot but had a 13.9 average finish with 7 DNFs. And THAT is why Kenseth owns a championship trophy and Newman does not.

It all comes down to luck.

I hope it does!

If I was Joey, I’d take advantage of this stupid “musical chairs” farce and just run one lap in each of the next two races and then, park it !!
Absolutely NOTHING to be gained by even running the next two. He’s gonna move on no matter WHAT, and any extra points or wins will be taken away and mean NOTHING when Brian changes the scores AGAIN to make everybody “equal” — as in PUNISH the LEADERS, and REWARD the losers !!!

Well..some will tell me to get over but I gotta say and will say till I am breathing..I hate “The Chase” in all it’s forms. I would find it sweet justice if MK got the trophy without a win, that would have folks storming Castle Daytona, but I am thinking Brian will look out the window and mistake the pitchforks and torches as a validation of his greatness and his genius known as “The Chase”. LOL.

…And to add cruelty and insult to the hard work of many, they add Talladega into the mix…what are they smoking? I really don’t understand that, especially on such a pivotal timeline.

Personally since this “Chase” format was announced I have been hoping that the season champ at Homestead would not have a win all season, finish 4th -10th for the 3 races leading up to the last round, enter Homestead as the 4th seed and then finish 2nd to a Non-chase (top 16) driver, like the 1 team, 29, or whomever, essentially a team that likely would not have been looked at to even make the Chase back in Daytona. Oh the humanity and outcry that should resonate by the masses.
Might be the only thing that would force the France family into shooing little Brian out the door for ruining the Golden Goose they are enjoy.

The only thing missing from this version of the Chase, is the winners are not rewarded in the following round. The winner three point bonus should go through the entire season not have stopped after Richmond.

The only change to the points system I truly had no problem with over these past 11 years was the actually point change itself. I think it has helped to a degree that going from the 175 point for a win or whatever it was to the 43 points for a win done to 1 point for last was about the only good change.
I would have had a win have a 10 point bonus instead of 3 and removed the lead a lap bonus point. Keep the bonus point for leading most laps as that is truly earned versus just simply leading a lap.

Keep in mind that the sports growth occurred while having essentially the same points system in place for 35-40 years. Since it was changed the sport had a temporary upswing but is now in a huge decline. Part of the problem is changing how a champ is determined what 4 or 5 times in 11 years.

The columnist make a good point about the 2003 season too. The team that won the most actually had worse overall stats other than the wins. It’s racing it cannot be solely about wins it has to be about finishes over the course of the season. Hence bonus points for winning but still rewarding those that do finish better than everyone else. Keep in mind many of those 8 wins were fuel mileage races as well. So not completely dominating the race itself.

Personally, we should go back to where the season means less than the individual races. Yes have a season champion but not have that be the end all be all of the sport. Get that money into the race purses and dispersed more evenly throughout the field.

How many times in the past 10 years of the Chase has someone had a bad day and been out of it? Fate is a fickle mistress and it takes a whole season of consistency plus you have to perform in the “playoffs” as well. As we just saw with the Angels in baseball, being the best during the regular season doesnt mean anything. I kinda like this elimination Chase because you have to be good for each of the three races, not just cruise for all 10 as we’ve seen Jimmie Johnson do. Tony Stewart’s 2011 run is exactly what we wanted to see. NASCAR really screwed up by not giving bonus points for wins in the next round. As Ron said, Joey has nothing to lose now and can just mail it in for the next two races.

Bill B
Reply to  Kevin in SoCal

I agree with you. For the past 10 years the championship has come down to fate and not awarding the best. One of the good points about the old format was that, in 36 races, luck (or fate, as you call it) had a pretty good chance of evening out.
BTW, please don’t compare NASCAR to other sports where it’s one team on one team facing off. It really is silly to use that analogy (although we all have at one time or another).

This is the inherent flaw in this system come alive. For all this emphasis on winning, it is really possible now for a non-winner to take the Championship. Kenseth more than Newman in my opinion. Like many I had really strong feeling this was going to be the wildest Chase round, because Kansas has been such a wreckfest since the repave. Also, it always seems like a big time Chase contender has a crash or mechanical problem at Charlotte, and then there is Talledega. There is a real possibility 3 of the best teams all year could be eliminated. The 2, 48, 88 have their backs against the wall already and the 4 and 24 are at risk too.

A big problem with the Chase is that NASCAR fans spent 3 decades with one system that more times than not crowned an acceptable champion. All the team sports have had playoffs since their beginning and fans are accustomed to the “best team” not always winning. It will be a major embarrassment for NASCAR if the 2, 22, 4, 24, 48, or 88 don’t win the title. Those were clearly the best 6 teams all year.

I agree with you Jeff, consistency IS a big part of the points, more so than winning, imo. It is my hope that Matt Kenseth wins the CUP, no wins but good finishes every week. Isn’t he the reason brian france invented the chase in the first place?