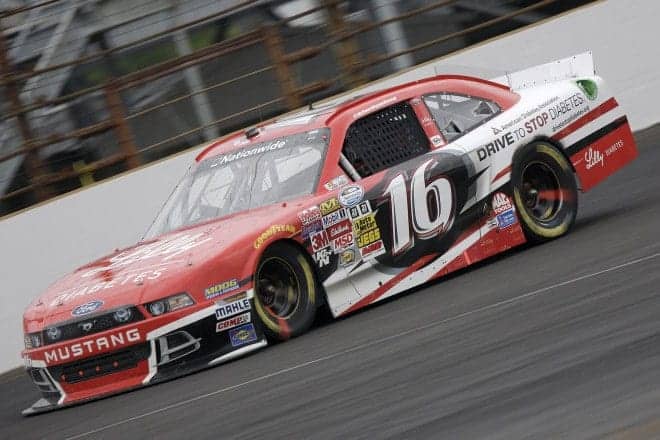 On Wednesday, Roush Fenway Racing announced that they have reached a multi-year contract extension with Lilly Diabetes and the American Diabetes Association.  As a result of the agreement, driver Ryan Reed will continue to drive the No. 16 Ford Mustang in the Nationwide Series (soon to be XFINITY Series) full-time.  In addition, the Drive to Stop Diabetes program that Reed is spearheading will continue as well.

Reed is very pleased to continue his relationship with Roush Fenway Racing, while also promoting his cause.

“I am very excited for the opportunity to move forward and expand the [Drive to Stop Diabetes] program,” Reed said in a press release.  “As someone who was diagnosed and told that my dream of being a professional driver was over, I personally understand the importance of education and awareness as well as tapping into resources to manage my diabetes.  With so many people living with or at risk for diabetes, it is so important that we continue to educate people about how to get out ahead of it and live with this disease.”

“The inaugural year of the Drive to Stop Diabetes campaign has been a tremendous success for the Association, and we’re excited for what the future holds for this partnership moving into the second year,” said Suzanne Berry, Interim Chief Executive Officer of the American Diabetes Association.  “Ryan’s voice and passion for educating and inspiring all people who are affected by diabetes has accelerated the program beyond our expectations, and we remain a committed partner as together, we continue our ongoing efforts to Stop Diabetes.”

Through 29 races, Reed is currently ninth in Nationwide Series points.  He has earned one top-5 finish, a fourth in the Subway Firecracker 250 at Daytona International Speedway in July.