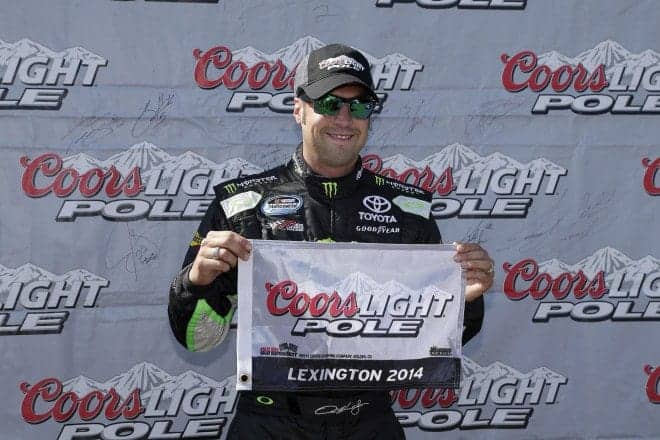 On Wednesday, Richard Petty Motorsports (RPM) announced that Sam Hornish, Jr. will drive the No. 9 Ford Fusion full-time in the Sprint Cup Series in 2015.  Hornish will be replacing Marcos Ambrose, who is returning to Australia to race in the International V8 Supercar Championship in a joint venture between Dick Johnson Racing and Team Penske.

Hornish is very pleased to return to the Sprint Cup Series on a full-time basis.

“This is a great opportunity to join Richard Petty Motorsports and the No. 9 Ford team in the Sprint Cup Series,” Hornish said in RPM’s press release.  “Owners Richard Petty, Andrew Murstein and Doug Bergeron have built this organization into a championship-contending team with world-class sponsors and partners. Many people have noticed to the progress being made here and I’m ready to build off this momentum. My goal is to put the No. 9 team in Victory Lane in 2015 and be a competitor in ‘The Chase’.”

RPM co-owner and namesake Richard Petty believes that Hornish will fit in perfectly within the organization.

“Sam is a really good fit for RPM and will be a great addition to the team,” Petty said.  “He’s a family man who fits well with our core values and he will be a great ambassador for our partners. Sam’s also proven that he can win races and compete for a championship. He came into the NASCAR Sprint Cup Series with a steep learning curve from open wheel racing, but has shown in the Nationwide Series that he is a winner. We feel that he can get the No. 9 team to Victory Lane and compete in ‘The Chase’ for us.”

Hornish has 131 career Sprint Cup Series starts, but has not raced full-time since 2012.  Back then, Hornish was tapped at the 11th hour to replace AJ Allmendinger in the No. 22 Shell/Pennzoil for Team Penske after Allmendinger was suspended for running afoul of NASCAR’s Substance Abuse Policy.  In those 131 starts, Hornish has no victories, but has earned three top 5 finishes with a best finish of fourth at Pocono in 2009.  In 2014, Hornish has raced once in Sprint Cup, subbing for Denny Hamlin at Auto Club Speedway after Hamlin got metal in his eye on race morning.  Hornish drove the No. 11 Toyota to a 17th-place finish.  Outside of Sprint Cup, Hornish has made eight starts in the Nationwide Series, primarily as the alternate driver in the No. 54 Monster Energy Toyota for Joe Gibbs Racing.  Hornish won at Iowa in May and has four top-5 finishes and two poles.

Getting Hornish under contract for the 2015 is just one part of the battle for RPM’s No. 9.  Sponsorship is still an issue.  The team previously announced that Twisted Tea, one of their sponsors, has re-upped for an unspecified number of races in 2015.  However, the loss of Stanley Black & Decker to Joe Gibbs Racing has left RPM with 30 or more races open for the 2015 season.  Wednesday’s announcement did not reference any potential new sponsors for the team.