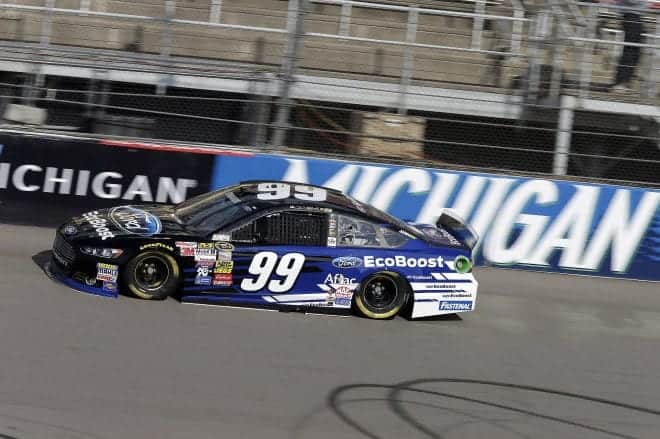 Author’s Note: While the Truck Series sits idle for its final off weekend of the year, much of the series has been quiet this week, save for an announcement that Gray Gaulding’s Martinsville truck will be pink for Breast Cancer Awareness Month. So instead of covering the Truck Series this week, I’m taking the opportunity to reach back for an old favorite project of mine: spotlighting charitable work drivers have been involved with. I do have one little tidbit to share with you before we dive in, though concerning GMS Racing and their future plans…

Had a source tell me today that @BrandonJonesRac is expected to join @GMSRacingLLC at @MartinsvilleSwy with possible RCR backing. #NASCAR

Contacted @GMSRacingLLC about @BrandonJonesRac but was unable to reach them for a comment. #NASCAR

If you were to look around social media and on comment boards all across the internet, one theme becomes clear: there’s discontent amongst a majority of NASCAR fans. Whether it’s the constant tweaking of rules, the new Chase format, the product on the track or something different entirely, many are so fed up that they’re simply ready to throw their hands in the air and turn their back on a sport that had so much promise when I first started watching. But last Monday morning, Tony Stewart reminded me that there’s more to life than how happy – or unhappy – NASCAR makes you.

When asked what had been the biggest impact on him since the accident that took Kevin Ward, Jr.’s life in August, his answer was simple.

“As a race car driver, driving a race car is all that consumed my life,” Stewart said. “It’s all I thought about, it’s all I cared about, and everything else was second on down the list of priorities for me. I think this has given me the opportunity to sit here and think about other aspects of my life and what they’re going to mean to me in the future.

“Not that I don’t love what I do, because I do love it, but it’s not — just like you guys, it’s not what we do all the time. There are more things to our life than what we have as a profession. So it’s made me think about some of those other aspects of my life that kind of have been put on hold for years.”

Those are some of the truest words I’ve ever heard spoken and could likely be applied to others by inserting their job title. Regardless of how you feel about the direction of NASCAR in recent years, there are so many other things in the world to worry about. While the sport has, in the past, been a getaway from the stresses of daily life, for some it’s become as much of a concern, if not more so, than other major life priorities.

In the midst of all that complaining, it’s easy to drown out the positives. There are some feel-good stories that have come out of racing in recent weeks: Cole Custer’s record-breaking win at New Hampshire Motor Speedway, Chase Elliott’s recovery at NHMS after taking early race damage and even a few underdogs in the Chase. One of them, AJ Allmendinger, just barely missed moving on to the next round following Dover’s eliminations.

But perhaps the best work being accomplished in the sport right now is happening off the track, Good Samaritan moments that often go unreported. Last weekend, ESPN aired an incredible five minute piece about Carl Edwards that made me view the driver in a completely different light. Sure, I already knew that NASCAR drivers are some of the most generous and thoughtful athletes in the sports world today, but a story like that one that put faces to the recipients of their generosity humanizes the story. In case you missed it, the feature was about how Carl Edwards has kept very few of his race win trophies, instead opting to give them to the people who would appreciate them even more than he would if they sat collecting dust somewhere in his home – his devoted fans.

The feature was a spotlight on four different adults and children suffering from a variety of maladies who got to take home a race souvenir they’ll never forget. It also included the Gibson guitar Edwards won at Nashville Superspeedway, one that went to David Ragan’s older brother, Adam who suffers from Down’s Syndrome. Of course, it’s not an isolated good deed for Edwards, either. He’s donated a substantial portion of his race winnings through the years to multiple charities.

In fact, Edwards is a National Ambassador with Dream Factory, an organization that “grant(s) dreams to critically and chronically ill children from the ages of three through eighteen.” It was a partnership that was born from a wish by a 12-year-old boy back in 2004. All he wanted to do was a chance to attend a NASCAR race and spend a few moments with Edwards. Instead, “Josh” was treated to the then-Craftsman Truck Series race in the pits at Daytona International Speedway and an entire weekend meeting drivers throughout the sport, one that culminated in him attending the Daytona 500. Edwards ended up winning that Truck Series race, donating his trophy to the young man shortly thereafter. Since then, the driver of the No. 99 Ford has granted dreams for several other children and remains an ambassador with the organization.

Additionally, Edwards and Roush Fenway Racing teamed up with Copart to sell the XR1200TM Harley Davidson Sportster he had won at Road America in 2010, among other memorabilia. All proceeds were donated to Back2Back Ministries, “a non-profit organization that provides for orphans and impoverished families around the world with locations in Monterrey and Cancun, Mexico, Jos, Nigeria and Hyderabad, India.”

“Sitting at the drivers meeting in Road America, they showed all of the drivers this really cool looking motorcycle that the winner of the race would win,” Edwards said to the charity at the time. “I knew that if I won the race, that motorcycle would be mine. So, I was talking to a friend of mine, Lonnie Clouse who serves orphans through Back2Back Ministries, about selling the bike if I won and giving the proceeds to his orphanage. After we talked about it, I was thinking about how I was going to sell this motorcycle. Luckily, I have the perfect sponsor to sell a vehicle online and raise money. This is a perfect case of everything falling into place and I’m really proud of working with Copart in order to make this happen.”

It’s good deeds like these that stand out for me the most, a reminder of how NASCAR and life can interconnect, in such a positive way even when the sport is seemingly lost in its own decision-making. These heartwarming tales, of drivers giving back in a world filled with spoiled athletes should be enough to make even the most frustrated fans smile. Single-file racing can always get frustrating, but no “photo finish” can ever beat these types of feel-good moments, filled with connections that last far longer than a three-hour race you see on Sunday.

Wonderfull story on CARL ! I have been a CARL fan forever so knew about the wonderful things he does for others ! I am so glad you have shared this with others — especially the people that say he is FAKE !!! Boy ,does that set me off — this young man does not have s fake bone in his body! I know of no one more giving ,caring and less selfish then CARL !!!!

Talented driver, handsome and funny. Yes, all that and more. It’s the more that will keep Carl Edwards as my favorite NASCAR driver. His respectful manners, loving mind and his great big beautiful, giving heart and sweetness of his personality that grabs me. God Bless Carl Edwards and whatever team he is with.