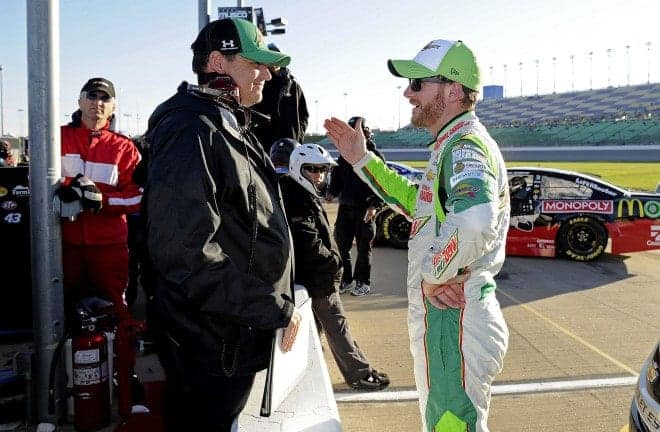 Well… that was interesting. What I’m referring to of course is last week’s Sprint Cup race at Kansas, an event that could potentially go down as the turning point in this year’s Chase for the Championship. Three pre-Chase favorites, Jimmie Johnson, Brad Keselowski and Dale Earnhardt, Jr., encountered disaster-level problems at Kansas, and with only two races left in the Contender round, those three men find themselves outside of the cutoff line. With next week’s race being at the unpredictable  Talladega Superspeedway, there is even more on the line in tonight’s race at Charlotte for those three drivers (and all of the other Chasers without Contender round victories, for that matter). It’s going to be a shootout tonight ladies and gents, and whoever comes out on top will be able to breathe easy when the series drives into Alabama next weekend.

On to the questions!

1. Is tonight a must-win for the drivers outside of the Chase cutoff?

Unfortunately for guys like Keselowski, Johnson, and Earnhardt, Jr., the answer to this question is yes. As we continue to learn more and more about this new Chase format, it has become increasingly clear that every race in the Chase is a must win for every driver. The reason? Well… just look at what happened to Keselowski last week.

The driver of the No. 2 Ford was the class of the field in the opening round of the Chase, grabbing a win in the opener and contending for wins in the following two races. By all accounts, Keselowski was flying high entering the Contender round. But what do you know, one blown tire and he sits outside of the cutoff.

It’s not hard to see why every race should be treated as a must win going forward for everyone in the Chase. One bad race can nearly eliminate you, and one win can push you into the next round. All of these drivers are teetering on the edge between glory and defeat, and the smallest slip up can kill their whole season. Oh, and did we mention that Talladega is next week?

Factoring all of those parts together, it’s not difficult to understand why tonight is a must win for not just the guys outside of the Chase cutoff, but also for the guys within the cutoff. Bad luck can strike at any time, and with Talladega being the last race in the round, no one wants to pin their hopes for advancement on a track as unpredictable as that place.

2. Can Joey Logano play the role of spoiler?

Joey Logano is in a very interesting position entering tonight’s race. Courtesy of his win last week, he is locked into the next round of the Chase and thus “technically” doesn’t stand to gain a whole lot in tonight’s race. He and his team can essentially relax, get out on the track, run their best, and be satisfied with whatever result comes their way.

But let’s revisit that first point, the one about Logano not having much to gain tonight. Most in the garage and in the NASCAR media are trying to say that Logano doesn’t have much to race for tonight other than the trophy. I guess all of those folks ignored Brad Keselowski’s furious attempts to win races in the Challenger round despite locking himself in in the first race, but that’s aside the point. Here’s the deal: Logano actually has a lot to race for tonight, and he damn well knows it.

Logano and his team are not oblivious to the fact that some of their strongest adversaries in the Chase for this year’s championship are currently sitting outside of the cutoff right now. If Logano wins tonight’s race, he is, in doing so, robbing his competitors of what could be their only chance to advance into the next round. Same logic applies at Talladega next week.

With that in mind, Logano will be a curious driver to watch tonight. If he is aggressive early in the going and appears to have a shot to take the lead, it will say a lot about how his team is approaching the rest of this round of the playoffs.

3. Is JGR officially back?

For as much as Joe Gibbs Racing struggled during the regular season, they have made up for it in spades thus far in the Chase. Their ace driver, Kyle Busch, is boasting a sporty 7.0 average finish thus far in the 2014 Chase and put his car on the pole for tonight’s race in Charlotte. Meanwhile, his teammate Denny Hamlin qualified third, and both drivers were fast in the practices for tonight’s race as well. What gives?

Whatever JGR changed going into the Chase, it is working. Granted, the improvement has been gradual, but for the first time all season, it appears that Gibbs machines are truly capable of winning again, and frankly, it could not have come at a better time.

Kyle Busch in particular will be the one to watch tonight. Sitting second in points and knowing that key championship contenders could be facing elimination, Busch is in position to go into attack mode and grab that elusive win that will lock him into the Chase.

Regardless of which JGR driver steps up, it seems certain that at least one of them will be a contender for a final four spot at this point, and tonight could go a long way in helping make that a reality.

For the first time thus far in the Chase, the triumvirate of Kevin Harvick, Joey Logano, and Brad Keselowski do not appear to be the favorites going into the race. While all three have certainly shown speed this weekend, they have not had the dominant speed that they showed prior to the four previous Chase races.

Rather, it’s the two drivers who will be starting on the front row for tonight’s race that look to be the ones to beat. Kyle Busch and Jeff Gordon set a blistering pace in qualifying, and each has a great deal of pressure on them to grab a victory in order to avoid having to race their way into the next round of the Chase at Talladega. Each has had elite speed this weekend and each has been fast enough over the past few weeks to warrant “favorite status.” My guess is that your winner will be one of those two.

As for a dark horse (if you can call one of them that…), look no further than the three drivers sitting outside of the Chase cutoff: Johnson, Earnhardt, Jr. and Keselowski. Knowing that not winning could be a death sentence for their title chances will likely be just the boost they need to run well, so keep a special eye on those three tonight as they attempt to race their way back into Chase contention.