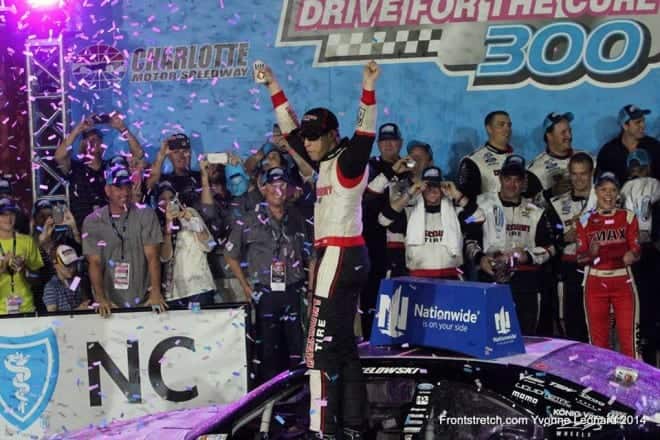 The moon wasn’t full but you wouldn’t have been able to tell with the way the race played out at Charlotte Friday night. A number of storylines battled for top-billing including multi-car accidents, pit strategy and tire wear but in the end Sprint Cup regulars Brad Keselowski, Kyle Busch and Matt Kenseth found their way to the front taking the top three positions respectively.

Attrition was high as eight total cautions slowed the race including three multi-car accidents that involved 20 cars and required a red flag on lap 76 for cleanup.

Tire wear was also a hot topic the first half of the race as numerous drivers saw significant cording of their right side tires. However, as the race went on and more rubber was laid into the track, the tire wear improved, although, it will surely be a topic of concern for the Cup teams Saturday night.

Alex Bowman might not have gotten the finish he expected, but he certainly turned some heads this weekend in his one-off ride with JR Motorsports in the No. 5. He won a practice session, a round of qualifying and started the race seventh. Although he did not lead a lap, he ran toward the front all night before eventually finishing in 12th place. Some would say it’s a missed opportunity, but Bowman showed that with the right equipment, he can be a contender.

It seems that Regan Smith can not find a way to finish ahead of his teammate and championship competitor Chase Elliott. Even on a night when questionable pit calls put Elliot behind, Smith had problems of his own battling an ill-handling car. Elliott was upset with himself in post-race interviews for finishing no better than eighth. Smith was unable to capitalize on his teammate’s frustrations, salvaged an 11th-place finish and lost valuable championship points.

Ty Dillon had everything to gain in Charlotte, and everything to lose. Regretfully he was unable to capitalize on a possible strong performance, pushed the envelope in a four-wide situation and paid the price. Dillon was involved in a wreck and recorded his first DNF of the season. He finished in 30th place and drop from third to fifth in points with only three races remaining.

Ryan Sieg drives for an underfunded, family-owned team. However, he continues to show speed on a weekly basis. His two best finishes this season came at the restrictor-plate track of Daytona where he finished ninth and third. Although they were his only top-10 finishes of the season, he only has four finishes outside of the top 25. Sieg ran strong all night and was as high as second after pit stop strategy. Seig finished the race in 13th place and moved to 16th in points.

There were no start-and-park cars

Tire wear and strategy kept the racing close throughout the entire night. Seven different drivers paced the field and laps were equally led amongst Nationwide regulars and Cup invaders. As predicted, though, the second half of the race was dominated by Sprint Cup regulars. Although he wasn’t happy with his finish, Chase Elliott extended his points lead over Regan Smith and with only three races remaining, could very easily become the first rookie to win the Nationwide Series Championship.

That seven could’ve been eight. Trevor sure has had mixed weekend. I hope he can put it, at least the bad part, behind him at ‘Dega, when he races with the Wood Brothers.

I felt sorry that Trevor ended up not qualifying for the Saturday night race. But, I do not blame him one little bit. He has the talent. Unfortunately, all the talent in the world won’t help if the equipment you are given is pure junk. And that basically describes Roush’s Cup program right now. And, until John Henry, or even Ford, takes Mr. Roush by the scruff of the neck and give him a good swift boot up his hind end and step in to force Roush to change his ways, nothing is going to change any time soon.

I don’t blame T-Bayne. I saw how someone in this Facebook Trevor fan group I’m in said he thought it was kind of a last minute deal. This was a team that had never worked together before, so it was a bad situation. I’ve never thought he was a bad driver. I remember the day I learned his name, which was the day of his Daytona 500 win.

Just had too much humanity? Need to get away for awhile with no one else within miles? For the price of a NW ticket you can have an entire track to yourself. Ahhh, relaxing.

I suspect that anyone in the stands Friday evening were people who came from a long distance and were making a weekend holiday of their trip.