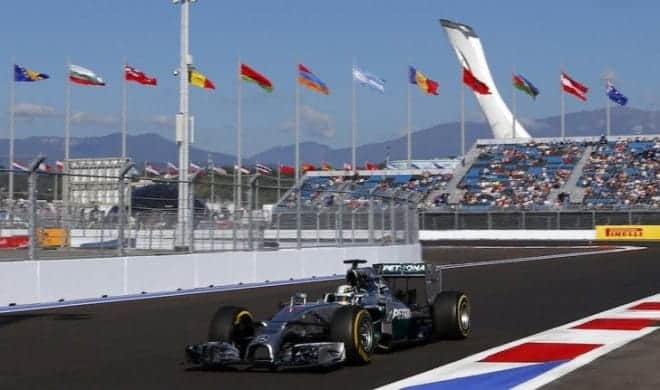 The story that continues to hover over Formula One is Jules Bianchi’s crash last weekend in Japan.  Little in the way of details have been released about Bianchi’s injuries other than that he suffered a diffuse axonal brain injury.  This kind of injury is seriousness at its most poignant and Bianchi may very well be fighting for his life.

Not surprisingly, the series held a press conference to go over the incident, discussing what happened, but also offering scant information about how to proceed.  Those in the FIA have mentioned that they will look into how they handle on-track incidents and the use of safety cars.

That the series has run without this kind of problem in recent years is a testament to the safety measures implemented and carried through beginning in the 1970s.  But perhaps it’s time to give them another look and adopt full-course cautions with more frequency.

Of course, the plan is to have standing re-starts next year, so more full course cautions would mean more instances of recommencing racing in that fashion which could very well lead to more accidents.  The likelihood of standing re-starts sticking  around is probably as likely as Romain Grosjean winning the title.

All of this stuff belies the fact that what happened to Bianchi was a freak occurrence that happened under wet conditions during the stage of a race when everyone should have been switching to full wet tyres.  Blaming the crane for being out there is just one aspect because really it’s the whole milieu of things that put the young, well-liked driver in the hospital.  Racing is dangerous and that never changes.

This week the drivers will be contesting the new track in Sochi, Russia.  The circuit is built upon the Olympic park, which comes as a bright idea because so many Olympic sites turn into examples of industrial wastelands after the games are over.  The track, sitting at just under 3.7 miles is the third longest on the tour and features 16 turns with some treacherous turns and sweeping straights.

From the get-go the Mercedes team looked strong, with points leader Lewis Hamilton and Nico Rosberg posting the quickest times in the first practice session.  In the second session, those two put down the first and fourth best times.

There should be no surprise in the Mercedes duo maintaining their position up front, as at this point it is same ol, same ol.  In fact, even though the track is green and no one has any experience on it, the Mercedes have just been that strong throughout the season.

One of the early surprises, however, has been Jenson Button running quite strong.  Then again, with talk of his job being on the line and the realization that he may be competing in his last four grand prix in F1, Button’s push could be the mark of a driver looking to get everything he can before he’s done.

Sebastian Vettel’s departure from Red Bull, announced last weekend, was to be blunt, a shocker.  The initial feeling had the four-time champion heading to Ferrari.  Then later this week there was speculation that he might be going to McLaren.  That since has changed and it’s back to the prancing pony.

Forbes, following up on a story by the The Daily Mail of London, is reporting that Vettel will be signing a contract that is worth 150 million Sterling for three years.  A little bit of conversion math and that puts his yearly salary at nearly $80 million!  Holy moly.  The top drivers in NASCAR are pocketing only $15 to $25 million in salary, which makes Vettel’s look positively absurd.

Then there’s the domino effect.  For starters, Fernando Alonso has long been rumored to be the driver bringing home the biggest paycheck but he is now being usurped by the driver who is set to replace him.  What makes this situation all the more interesting is that Alonso has yet to sign anywhere.

Alonso has been considered one of the best drivers out there for a while, as noted by his two championships, but he has failed to match the lofty expectations that surround him mostly due to Ferrari’s inability to provide the Spaniard with a car able to run with Red Bull previously and now Mercedes.

Where does Alonso end up?  Jalopnik had a funny take on the situation, found here.  The big question in play is whether or not that F1 teams will have to move to three-car teams next year or if the current financial state on the grid keeps things at two cars.  Or maybe Ferrari has already moved on…

Which means that Alonso will be in a McLaren, powered by Honda and taking Button’s seat for next year.  The drama that surrounds the F1 silly season is enjoyable because it ties driver with manufacturer, with team principals, with sponsors, with marketing, with who looks good wearing what.

At this point it’s a wait and see thing.

Pirelli will need to bring softer tires next year if this track has any chance of hosting an exciting race.