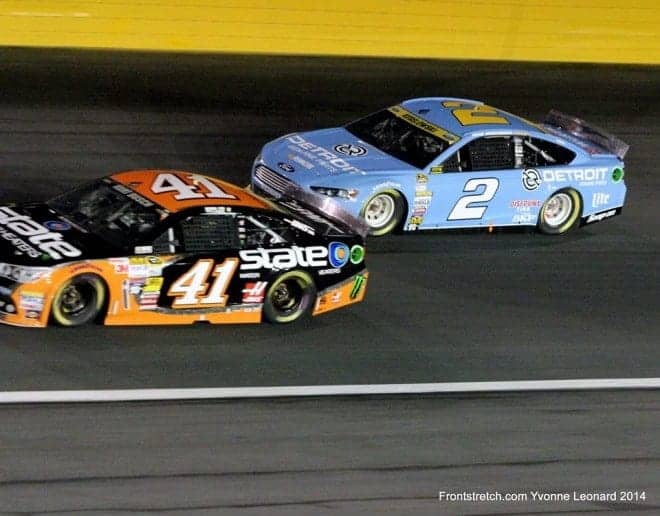 Talladega Superspeedway has always been known as a “wild card” track. Restrictor-plate tracks are known for two-, three-, and even four-wide racing at 200 mph lap after lap. It also makes for surprise winners and big wrecks that can ruin a driver’s bid for a championship.

So when NASCAR announced the new 2014 Chase format with three 3-race rounds that include the elimination of four drivers at the end of each round, leaving four drivers to battle for the title at Homestead, eyes immediately focused on Talladega. The 2.5-mile track looms large as the final race of the Contender Round where an additional four drivers will be eliminated, leaving only eight to complete in the Eliminator Round.

So what does Talladega have to do with Charlotte? If you watched Saturday night’s race, and listened to the commentary before and after, you understand. Much of the conversation amongst drivers all weekend was the importance of winning and automatically advancing to the next round before Talladega. No one wants to leave their championship fate in the hands of their 42 competitors.

Kevin Harvick won the Bank of America 500 Saturday night and need not worry about where he finishes this coming weekend. He understood the importance of his third win and the weight that is now lifted off of his shoulders.

“I won’t be anorexic and throwing up all week,” said Harvick in his post-race interview when asked how he feels knowing that he’ll advance to the Eliminator Round. “I didn’t even know how we were going to prepare for next week without just being a total disaster because you just know that so much is out of your control going into Talladega, and really this is the round that we focused the most on in my opinion.”

A victor’s sigh of relief is usually met by the agony of defeat, and that rang true as the urgency to win reached a boiling point for a number of drivers, even the most mild-mannered. On a restart with 60 laps to go Matt Kenseth went to the outside of Brad Keselowski battling for the lead. According to Kenseth, “He knew I was there and he ran me out of room. He ran me into the wall because he did not want to get passed.” Because of the damage, Kenseth fell a lap down to the leader. When the caution came out with six laps to go, Kenseth received the free pass and on his way around the track drove across Keselowski’s nose damaging his right front. After the race, Keselowski sideswiped Kenseth on pit road. This interaction spilled over to the garage area where Kenseth attacked Keselowski, putting him in a headlock before they were separated. The result of this? Both Kenseth and Keselowski find themselves outside the top eight in points.

All of this positive and negative adds up to one thing. Drivers understand that winning at Charlotte was the key to securing a chance to race in the Eliminator Round. Without a win, 10 drivers are now leaving their championship hopes in the hands of their competitors. And if Charlotte is any indication of the type of racing we can expect to see next week at Talladega, you surely don’t want to miss it. There is bound to be a lot of emotion from not only the drivers that advance, but the four that will not.

And what this really points out is how asinine it is to have Talladega as one of the races in this new format. A crapshoot on top of another crapshoot. But, I suppose, that’s what NASCAR wants.

I’d submit that it was asinine to have Dega in any 10 race version of the “Chase”. This version just makes it more glaring. I mean, honestly, a format where you run 3 races and then get your points reset to the same as the rest. Then, 3 more races and the same. Then, 3 more. And finally 4 drivers have their points equalized for the final event. Best finisher declared “Champion”? Champion of what exactly? One race?

Oh, and the points standings at the end of the year will be rather meaningless as well. Larson just missed getting into the Chase and can finish no better than 17th in the points even though he’s performing great and racking up the points in the Chase races.

I’m even more of a Kenseth fan now. Hamlin is a wimp, but not Kenseth. Bravo.