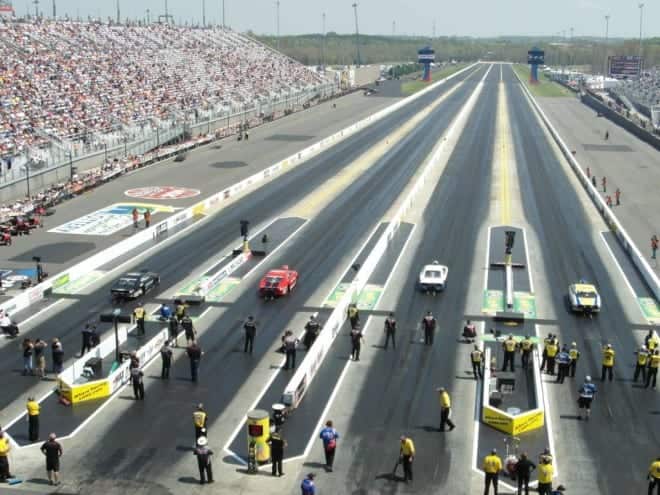 Sprint Cup Series: Busch Hanging Tough – With all the drama that unfolded after the race at Charlotte, the storylines seem to overlook one of the more intriguing aspects developing during the Chase, that being Kyle Busch.  If there had been odds in Las Vegas on who might be involved in such postrace nuttiness, KyBu’s name would have had to be at the top of the board.  Instead, the driver most associated with the adjective tempermental, is having one of the most consistent postseasons of anyone.

Through the first five races, Busch has yet to finish lower than tenth, and is holding his own.  With his fifth-place finish at Charlotte, he now has an average finish of 6.6 – not too bad for a driver that is supposed to wilt under pressure and lose his mind when faced with adversity.  Even more impressive is that the Joe Gibbs Toyotas have failed to match the pace set by Penske’s Fords or Hendrick’s Chevrolets, but somehow Busch is putting it together.

With Dale Earnhardt, Jr. faltering, Jimmie Johnson fading away, and Brad Keselowski losing his mind, Busch is in position to advance to the next round with a bit of a cushion.  He’s 43 points up on the Kes, who’s in 10th, so he’s really racing his teammate, Matt Kenseth, in ninth who is 26 points behind.  Sure, a win at Talladega makes things easy, but otherwise, just an average kind of finish, say 20th, should do the trick.  – Huston Ladner

NHRA: Next Hot Racing Association: If you’re not watching NHRA, here’s why you should be. – It’s NHRA Week on Frontstretch! The stars and cars of the NHRA might be on a three week break before the final two events of the 2014 season, but that just makes it a great time to catch up and for those fans not already watching, learn about life on the drag strip. Most of all, learn why you should think about giving the NHRA a try the next time they are in your neighborhood.

Monday is family day, taking a look at what exactly the phrase “it’s a family sport” really means. To go along with the family theme, we’ll have an interview with Hector Arana and his two sons, Hector Arana, Jr. and Adam Arana, who race together as a team in the Pro Stock Motorcycle class.

Montgomery: Beyond the Cockpit with the Arana Family: Life on Two Wheels

Tuesday it’s all about diversity, something NHRA does maybe better than any other motorsports series, although it wasn’t always that way. So how did they get to where they are? Our featured interview for the day will be with Pro Stock racer Erica Enders-Stevens, the first female to ever lead the points in that class.

Wednesday is about sponsorship. Military sponsorships have ended in every other motorsports series, but the U.S. Army continues with Tony “The Sarge” Schumacher and we discover why. The NHRA also has a number of drivers who have “day jobs.” Jeg Coughlin, Jr. talks about racing but also talks a little about how it ties in to his family’s JEGS High Performance.

Thursday we talk to rookie Top Fuel driver Richie Crampton, who came a long way from the other side of the world to race in the NHRA, and we also talk to his boss, Morgan Lucas, about how Richie is stacking up and about his family business, Lucas Oil Products. Think NHRA is too different from NASCAR? Pro Stock points leader Jason Line was part of the team that built championship winning engines for Bobby Labonte and Tony Stewart at Joe Gibbs Racing. Now he helps build them for championship winning KB Racing.

We wrap up on Friday with Full Force Friday, featuring interviews with two of the biggest starts of the NHRA, legend and 16-time champion John Force, and his daughter Courtney Force, the winningest female Funny Car driver. – Toni Montgomery

Formula One:  New Track, Same 2014 – Breaking in a new track might have brought with it some kind of surprise, an element where a team might be able to capitalize and make a statement.  That, however, was not the case in Sochi as the Mercedes duo of Lewis Hamilton and Nico Rosberg again cruised to a one-two finish and claimed the 2014 constructor’s championship.

For a moment, the race looked like it might portend some drama, when Rosberg stole first but in doing so not only did he run off course but he also flat-spotted his Pirellis and soon had to give back the position and pit.  He then drove a fantastic race, staying on the harder compound tyres for the remainder of the event and working his way back to second.  Hamilton, with clean air and the ability to use his soft compound tyres to stretch out a solid gap, never felt threatened and earned his ninth win of the year.

With three races to go, Hamilton is now in the prime position to claim his second championship as he sits 17 points up on Rosberg.  With none of the other teams showing any kind of improvement that would help them to match the pace of Mercedes, the championship is but a foregone conclusion.

As for other news, there was little in the way of an update on Jules Bianchi this weekend as he is recovering in Japan.  The drivers showed a rare moment of unity when they gathered in a circle before the race with Bianchi’s helmet in the center and offered their prayers.  The track also offered well-wishes to the injured driver by painting words of encouragement on the driving surface.  #ForzaJules.  – Huston Ladner

V8 Supercars: Bathurst Doesn’t Usually Take Eight Hours, Does It? – The answer is no, it doesn’t.  However, Sunday’s Supercheap Auto Bathurst 1000 was no ordinary Bathurst.  The big news entering the weekend was the new pavement on the 3.86 mile course that promised record speeds.  That very surface came back to haunt the proceedings.

Early on in the race, the surface began to break up in turn 2, Griffiths Bend.  It’s likely that the surface, in addition to cold tires, played a role when Chaz Mostert crashed his No. 6 Ford Falcon under the Safety Car on Lap 45.  Later on, Taz Douglas crashed the No. 360 Nissan Altima at the same place to bring out another Safety Car.  During that caution, the race was red-flagged for track repairs, the first time in the 52 year history of the race that the track surface itself has stopped the race.  Repairs took a full hour to complete.  During that time, the cars were all parked on the pit straight.  Repairs were allowed, but teams could not change tires.

Even after the red flag was withdrawn, the chaos continued.  Steven Johnson (son of Dick Johnson) spun all by himself out of the lead a couple laps after the restart and hit the wall.  The car stalled and Johnson could not get it restarted, ending his day.

Despite the wackiness, the race looked like it was still going to come down to the usual suspects.  Five-time V8 Supercars Champion (and four-time Supercheap Auto Bathurst 1000 winner) Jamie Whincup had a very tough day.  He was nearly busted for jumping the start, then spun and hit the wall just before Johnson’s crash.  After losing a lap in the pits getting repairs, Whincup was black flagged for an unsafe pit release and had to do a drive-through.  With the help of the Safety Cars, Whincup was able to get back on the lead lap and charge up to take the lead away from Mark Winterbottom with nine laps to go.

Everything looked good for Whincup to claim his fifth Bathurst victory.  However, with less than half a lap to go, the fuel tank ran dry on Whincup’s No. 1.  Whincup’s issues allowed the No. 6 of Mostert (sharing with Paul Morris), who started dead last and crashed early to take the lead and win the race.  The No. 360 of Douglas and James Moffat, who also crashed in turn 2, finished second.

For the 22-year old Mostert, it is his third career race victory in the International V8 Supercars Championship.  More importantly, it is his very first round victory.  For the 46-year old Morris, it is also his third career win, but his second career round victory.  The other round victory came way back at Round 7 of the Shell Championship Series at Calder Park in 2001, where Morris picked up his other two race victories in his own Big Kev-sponsored No. 29 Holden Commodore VT. – Phil Allaway

Short Tracks: Erik Jones is the Rifleman Again – The 43rd Annual Winchester 400 is in the books and Erik Jones made it two rifles in a row. Jones bounced his car off of the wall in practice on Saturday but still put his Kyle Busch Motorsports Super Late Model on the pole. Jones led the first 88 laps on his way to leading a race high 165 laps en route to his second consecutive 400 triumph. Travis Braden chased Jones to the checkered flag ahead of Donnie Wilson. Cody Coughlin was the fourth car across the line with Brian Hoar rounding out the top 5.

Five drivers led laps during the event Sunday with Ross Kenseth leading the second most to Jones before finishing a disappointing 12th, 14 laps down. Braden was on point for 42 laps while Hoar led 27 and Daniel Hemric showed the way for 17. Kenseth was the halfway leader and looked to be headed toward a win until he ran his car out of gas and lost several laps getting the car refueled. He came to the pits believing he had an ignition issue. Kenseth’s issues handed the CRA Super Series title to Braden.

Hemric looked like he was poised to prevent Jones from going back-to-back around the 100 to go mark but picked up debris which forced him to pit to prevent overheating. He was battling his way back to the point when his engine let go on lap 373, putting an end to his hopes for winning a second major race of the season after taking the Red Bud earlier this year. Braden led to around lap 360 before Jones put a slide job on him and took the lead. The two battled hard to the finish but Braden was unable to wrest the win from Jones. – Mike Neff