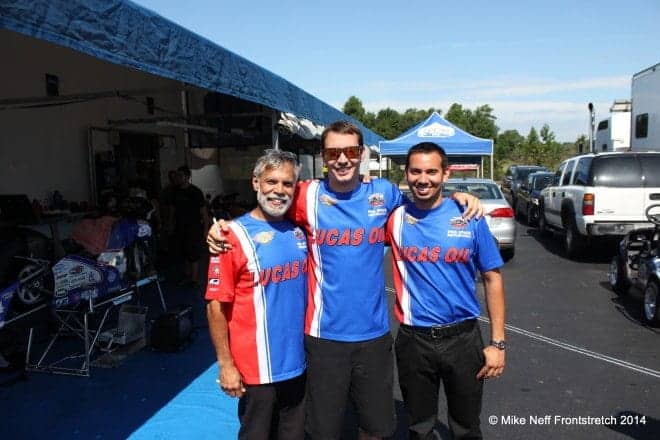 The NHRA is a different kind of motorsport in many ways, not least of all in the fact that not all of their competitors run on four wheels. Pro Stock Motorcycle is one of the four classes in the top tier Mello Yello Series. The class does not run at every event as Top Fuel, Funny Car, and Pro Stock do, but they make an appearance at 16 of the 24 events.

Veteran rider Hector Arana, Sr., and his two sons, Hector Jr., who started competing in 2011 and Adam, who started in 2013, took time to talk to our Toni Montgomery and Mike Neff at the Carolina Nationals to help explain what it’s like to go 200 mph on two wheels as well as what it’s like to race as a family. The slogan on the team hauler sums up their approach: “Three riders, one team.”

Toni Montgomery, Frontstretch.com: Our readers are primarily a NASCAR audience but we’re trying to introduce them to NHRA racing and help them learn about what goes on over here. Let’s start out with the most simple subject—describe riding one of these motorcycles down the drag strip.

Hector Arana, Sr.: We need to get them to know our organization and get those fans from NASCAR to come here. For me, when they call the bikes to the staging lane, I get these butterflies, my legs start shaking and it’s an awesome feeling for me. The thrill that I’m going to be riding almost 200 mph down the quarter mile in 6.7 seconds.

Montgomery: These motorcycles go about as fast as a NASCAR race car. The crazy part of it to me is in NASCAR they are in a cocoon with a seat that wraps around them, five point harnesses and roll cages and HANS devices and all that but you are just sitting on the bike and you have a helmet and leathers.

Arana, Sr.: Right. There’s something wrong with this, right? It is exciting, but it’s one thing that I have learned and I have taught the same thing to my kid is that when we’re out of control we have to bail out. We feel the bike. We need to know what’s happening at all times and if you are out of control, you make a small correction. If it doesn’t respond, we abort the run, because it’s easier to come back than to try to keep fighting the bike. You can get hurt, you can break something and you still are not going to have your best qualifying run so why get hurt? Abort the run, I have three more shots. Let’s say something goes wrong in all four qualifying runs but at least I can go to the next event and compete. That’s how I see it.

Montgomery: How much steering input do you have on one of these?

Arana, Sr.: In staging you have one of your crew right behind you and he’s lining you up like a rifle. You look back and look at him and he will make a sign whether we are straight or we have to go left or right and we just aim the bike. Once that is perfect you go and if you have to correct, we don’t use steering wheel, we use body. We lean and use body and that’s how we bring the bike back and forth whatever direction we want to go to.

Montgomery: I’d love to talk a little about the family aspect of your team. Hector Sr., you started in this and your sons followed you into it?

Arana, Sr.: They did but it wasn’t because of my choice. I never encouraged them to be a racer, especially on a motorcycle. I did have them with me since infants and they always have helped me so when they came to me and said “Dad, I want to race” it was hard. I kind of wished they’d gone into something else because I know what can happen, so I talked to my wife and she was so nervous but I said “Listen, it’s better for us to train them than if they go someplace else and start riding a bike.”

Montgomery: You at least know they know what they are doing if you are the one who trained them?

Arana, Sr.: Of course. I’m going to be the hardest one on them. I’m not going to be saying “Oh, you did great.” I’ve been a mean coach and they hated it but I preached to them safety, feel the bike, if something is wrong, don’t worry about it, I don’t care, abort the run. Don’t take chances. It’s not worth it.

Montgomery: This is a good time to bring the boys into the conversation and get some input from them.

Arana, Sr.: This is Adam, and he’s going on his second year.

Montgomery: I was talking to your Dad about you all being a family team and he said he felt a little better teaching you guys everything you know, but what’s it like for you being on a team with your Dad?

Adam Arana: It’s easy. We always have someone we know is going to share information with us and help us learn and progress so it takes some pressure off of us initially because we know there’s someone who’s always going to help us out no matter what.

Montgomery: So you know he’s always got your back?

Adam Arana: Exactly, and I trust him 100%, so if he checks my bike I’m not worried that he did it properly. I don’t have to go behind him and double check. It takes a lot off of me.

Montgomery: Two of you, Hector Sr. and Jr., are in the Countdown, but Adam, you are outside of it but that kind of brings up the question, does this maybe give the team an opportunity to have someone try things out that maybe the other two could use for the Countdown?

Adam Arana: Of course. Yeah, that’s one of the benefits of three bikes, you have that if you have something you wanted to try on the track but we didn’t have time to test it.

Montgomery: For the two of you that are in the Countdown, you are three riders, one team, but now you are competing against each other so what kind of element does that add to team and family dynamics?

Arana, Sr.: It doesn’t matter. Of course I want to win and of course I know they want to beat me. When they do, at the finish line they are like “Yeah!” Usually when I beat them, I stay calm and I feel a little bit sad, sweet and sour, you know?

Hector Arana, Jr.: He didn’t feel sad when he beat me in the E3. Don’t let him lie to you. He was happy he was going to the finals.

Arana, Sr.: We go for the win. I have to earn it just like they have to earn it. But still, it doesn’t matter. If we bring it home, it’s our win as a team.

Montgomery: You guys competed in your first ever father/son final earlier this year too. What was that like?

Arana, Jr.: You know the finals is just so much more relaxed. He won first and he was going to the finals and then all of a sudden it’s like I’ve got all this pressure because we can make this happen but when I won, it was like right then that we won the race. I already felt like we’d won and now we’re just going to run down the track and get the Wally.

Arana, Sr.: We’ll see who’s going to get it. Like he said, that was one of the most relaxed stagings going into the finals. Usually there are butterflies and all but when I got there I knew I already had won. It doesn’t matter who gets the trophy. We won.

Montgomery: Because the team won no matter what?

Arana, Jr.: We won the race. The trophy was coming home with us.

Arana, Sr.: That was something that we’ve wanted to do for four years.

Montgomery: Hector Jr., I ‘d also like to have your impression of racing for your father—I already talked to Adam a little about this. Tell me what that’s like.

Montgomery:There are more family members than just the three of you involved in the team, is that right?

Arana, Jr.: Yeah, it’s my sister and my mom. Everybody is involved.

Mike Neff, Frontstretch.com: On the Nitro side you see those guys roll in and tear their engines down completely. I don’t see that going on over here. How often do you guys have to freshen your engines? Is it a couple times a weekend, a couple races?

Arana, Sr.: We keep counts on how many runs on the engine, on parts, pistons, crankshafts, so we have a limit. We go ahead and replace those parts as a precaution to avoid damages later down the road. We go 50 runs. We’ve got a number we pick. If we start having failures before that then we break those down and go from there.

Neff: It’s kind of funny to say they mileage parts because you’re doing 12 ½ miles out of a piston and they you have to swap it out.

Arana, Sr.: I know. Can you imagine that? On a Buick it wouldn’t even be broken in yet.

Neff: I don’t know that I’ve ever even seen a full engine swap on a bike back here.

Arana, Jr.: We’ve done it. I had to swap engines actually the last time we were here.

Neff: Do these things stand up by themselves or will they fall over if left alone?

Arana, Jr.: It all depends on how level the ground is. It will stand there but if the wind blows it will tip over. It doesn’t fall on it’s side or anything like that.

Arana, Sr.: We need to let the NASCAR fans come over here, experience this, because then they’ll have an opportunity over here in NHRA to meet the drivers for the price of their ticket because it’s a pit pass.

Neff: It’s one thing to have a ticket be a pit pass but it’s another to have it be a pit pass and then the drivers actually come out here and spend 20 minutes talking to them.

Montgomery: All the drivers seem to come out to the ropes and spend time.

Arana, Sr.: We spend time, we give them autographs and take pictures. It’s a good experience.

Stay with us for the rest of NHRA week! We’ll have interviews and features every day from some of top drivers across all the classes of the Mello Yello Series. Make sure you check out our other feature for today, NHRA’s Family Affair. Tomorrow we’ll take a look at diversity in the NHRA and we’ll feature an interview with Pro Stock’s Erica Enders-Stevens. Wednesday we’ll find out why, when all of the other military motorsports sponsorships have ended, the U.S. Army continues their relationship with Top Fuel’s Tony Schumacher. We’ll also feature an interview with Pro Stock’s Jeg Coughlin, Jr. Thursday it’s Pro Stock’s Jason Line and his NASCAR connection and we’ll visit with Top Fuel rookie Richie Crampton and his boss, Morgan Lucas. We’ll wrap it all up with Full Force Friday, featuring interviews with John Force and daughter Courtney Force, the winningest woman in Funny Cars.