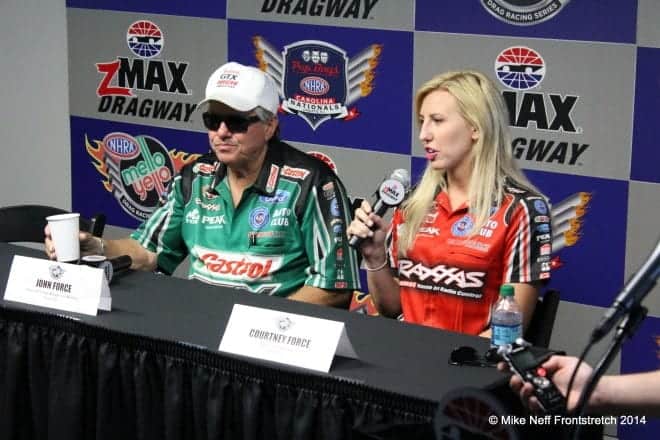 Father’s racing sons, brothers racing brothers. It’s been done in pretty much every form of racing. Daughter’s racing father’s, sisters racing sisters, and wives racing husbands is a bit more unusual. The fact that all of these things take place on every level of NHRA competition at every event means that the phrase “it’s a family sport” rings absolutely true in more ways than one.

The Forces are probably the most famous drag racing family, but there are so many other family connections like the Grays in Pro Stock, the Aranas in Pro Stock Motorcycle, and husband and wife duos like Richie and Erica Enders-Stevens or Matt and Angie Smith. Those are just the visible connections on the track but there are so many family teams as well like Don Schumacher Racing or Kalitta Motorsports.

They say racing gets in the blood so it’s not a surprise that some of today’s younger races are the children of the last generation of racers. As drivers like Brittany or Courtney Force to remember childhood, and it always seems to involve being at the race track.

“My kids grew up in it. Little swimming pools under the front of the trailer, little plastic pools from K-mart when it got hot, they could swim, and they lived out here,” says John Force.

Force says he was surprised that his daughters wanted to drive race cars, but it’s possible that he simply missed the clues.

“I’d go out to warm my car up and Courtney would be in the seat. I’d say ‘Courtney, get out of there and your clothes are all dirty. Now Mom’s going to be mad!'” he says. For them to drive, it really turned out great, because if anything, it’s going to drive me longer to stay in the business, because I want to be with them. Our whole family works in it. So, where else would you be? Would I be sitting home if I retired? My wife will be out here with our daughters and so will I.”

Brittany Force, competing in her second season of Top Fuel racing, has found her background helpful when it comes to finding her place and building relationships with her fellow drivers.

“I grew up out as a kid at the race track and loved being out here and that’s why I think everyone’s been so supportive of me coming in to a Top Fuel car as a driver because I grew up with all these people,” she says.

Racing parents are a strange breed, mostly all at once surprised, flattered, and dismayed by the idea that their children want to follow them in to the “family business.” They worry about the dangers and they worry because they know how difficult the lifestyle can be, but at the same time, there is a certain amount of pride that their children admire them and what they do to such an extent.

“I never encouraged them to be a racer, especially on a motorcycle,” says Pro Stock Motorcyle rider Hector Arana of sons Hector, Jr. and Adam, who also race with him for the family team. “I did have them with me since infants and they always have helped me so when they came to me and said ‘Dad, I want to race’ it was hard. I kind of wished they’d gone into something else because I know what can happen, so I talked to my wife and she was so nervous but I said ‘Listen, it’s better for us to train them than if they go someplace else and start riding a bike.'”

Arana does bring up once aspect that is interesting about so many of the NHRA families, the fact that they tend to stay together, racing together for the family team. John Force Racing’s four drivers are all family, with John, daughters Courtney and Brittany, and son-in-law Robert Hight, who is married to Force’s oldest daughter, Adria.

Arana, Sr., preferred that his sons stay with him so he could teach them the sport, but it turns out the boys were more than happy with this plan. There’s a certain security, says Adam, to knowing your father has set up and checked over your motorcycle. And, according to Hector, Jr., it’s a way to be together as a family

Still, while they may not be on different teams competing with each other, that doesn’t mean they don’t still sometimes find themselves on opposite sides.

This is perhaps where the differences between drag racing and other forms of motorsports become more apparent. In NASCAR, every driver competes against every other driver at every event so Kyle and Kurt Busch are always in direct competition with each other, as well as the other 41 drivers on the track.

Drag racing is different. When it comes to eliminations, if you make it to the finals, it’s four rounds and you face four drivers (yes, the four wides are different, but we’ll put that lone exception aside for now). You may or may not encounter your sibling, parent, or spouse. If you do, however, it’s a whole different dynamic because for that one round, it’s one on one. They are your only competitor and the only one who has anything to say about whether you go on to the next round or go home.

Erica Enders-Stevens had the misfortune to end up facing off against her husband Richie Stevens in the first round of the U.S. Nationals last month.

“We couldn’t have draw it up any worse,” said Enders-Stevens. “Being teammates and working together it was frustrating but I had to put out of my mind who was over there and that’s something I talked about through the season too, focusing on our car, our lane, me and the tree and my shift points and that’s what I had to do. I had to ignore who was over there. At the end of the day our job is to win races. It stinks that we had to race each other and he caught a whole pile of crap for losing to a girl and his wife, but it’s all blown over a little bit and we’re back out here and running a lot better.”

Shane Gray thought when his father Johnny Gray retired from driving, the possibility of a family member in the other lane was a thing of the past but then his younger brother, Jonathan, entered the Pro Stock ranks this season and the two have already ended up facing off against each other.

“You treat it as another race. You go up there and do your deal,” says Gray. “Try not to pay attention who is in the other lane. It’s fun but it’s not fun. When we go up there, there’s no favors, there’s no punches pulled. Whoever gets to the finish line first is going to win and we’re either going to smack him on the back for it or on the back of the head and say ‘Good Job, Punk!'”

It would be easy to think the finals would be the worst possible scenario to line up against a family member, but it turns out to be quite the opposite mentality, thanks, in part, to the fact that these drivers are on the same team. Individual bragging rights take a back seat to team bragging rights, something that’s already secured when Hector Arana, Sr. and Hector Arana, Jr., for example, find themselves in opposite lanes for the final round.

“You know the finals are just so much more relaxed,” says Arana,Jr. “He (Arana, Sr.) won first and he was going to the finals and then all of a sudden it’s like I’ve got all this pressure because we can make this happen but when I won, it was like right then that we won the race. I already felt like we’d won and now we’re just going to run down the track and get the Wally.”

“It doesn’t matter who gets the trophy. We won,” echoes Arana, Sr.

That doesn’t mean that they don’t want to be the one holding the trophy, or even the championship title, at the end. Individual bragging rights still come into play, just that the pressure to win for team and sponsors is somewhat less.

“They are two of the toughest guys in Funny Car right now,” says Courtney Force of her father and her brother-in-law Robert Hight. “At the end of the day all of us are just fighting to get that trophy for our entire team. If any of our cars got it we’d be happy but individually we want to be the team that gets it.”

“No matter what I want to win, whoever I’m racing,” Hight agrees. “But when I look back to 2009 when I won my championship it came down to just Ashley (Force) and I, which she was my teammate, fighting it out to win a championship and the pressure wasn’t as great as when you’re out there racing say Matt Hagan, because now you lose, that championship goes over to another team, another set of sponsors, everything else. When it’s Ashley and I, it all stays in house.

“Yes, without a doubt, did I want to win? But there was a little relief, you know. It was a little weight lifted off your shoulders when it’s just your teammate. A perfect scenario would be Courtney and John and I right down to the last day at Pomona, just the three of us in the hunt for the championship.”

Drivers who share family connections are the most visible representation of the “family sport” mantra, but there are many more family connections in the pits at an NHRA event. Spouses, siblings, children are all involved. Ender-Stevens’ sister Courtney is also part of her team. Hector Arana’s wife and daughter are part of his. John Force’s entire family, including those not out on the race track work in the family business. Families fill the ranks of the Sportsman divisions too. The next generation is already out there in Junior Dragster, where Erica Enders-Stevens and her sister once raced.

“Race cars come and go, money comes and goes, trophies come and go but family is there forever and it’s so awesome that my family shares this same passion with me,” says Enders-Stevens. “You just go down the list and there’s so many families out here that are racing together and that’s really cool.”

Stay with us for the rest of NHRA week! We’ll have interviews and features every day from some of top drivers across all the classes of the Mello Yello Series. Make sure to check out today’s featured interview with the Arana family also! Tomorrow we’ll take a look at diversity in the NHRA and we’ll feature an interview with Pro Stock’s Erica Enders-Stevens. Wednesday we’ll find out why, when all of the other military motorsports sponsorships have ended, the U.S. Army continues their relationship with Top Fuel’s Tony Schumacher. We’ll also feature an interview with Pro Stock’s Jeg Coughlin, Jr. Thursday it’s Pro Stock’s Jason Line and his NASCAR connection and we’ll visit with Top Fuel rookie Richie Crampton and his boss, Morgan Lucas. We’ll wrap it all up with Full Force Friday, featuring interviews with John Force and daughter Courtney Force, the winningest woman in Funny Cars.