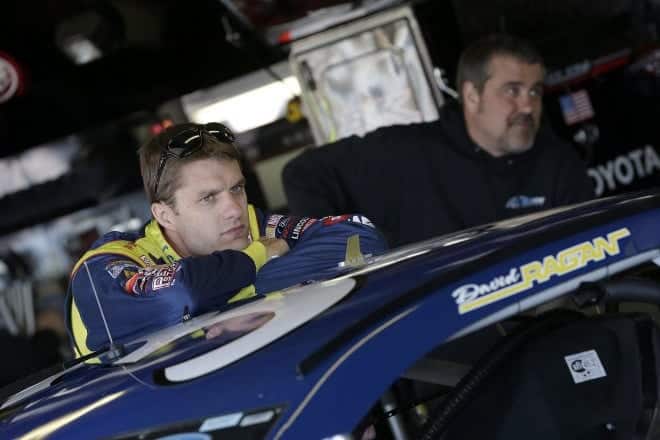 With one race remaining in the Contender Round, some of 2014’s biggest names still aren’t contending. Two former champions left Charlotte Motor Speedway unfulfilled and another rides the wrong side of the bubble.

Next, a return trip to Talladega Superspeedway does nothing to clear up a complicated Chase picture. The six drivers inside the cutoff without a second round win are within 26 points of not moving onward.

This edition of Who’s Hot and Who’s Not sets up what’s forecast as an unpredictable GEICO 500.

Life on top of Hot or Not must be nice. After all, Sprint Cup’s hottest haven’t gone anywhere.

Kevin Harvick remained a championship favorite after the Bank of America 500.

Harvick won’t have to worry about any one of the plethora of possible outcomes that accompany any date at Talladega. He piloted the No. 4 Chevrolet to Victory Lane in Charlotte and locked himself into the final eight alongside fourth-place finisher Joey Logano.

That’s not to say another win isn’t out of the question. Harvick has had his share of success in Alabama including a win in 2010. His third victory this season protects him from the other possible extreme: a 40th in 2013 caused by the dreaded Big One. That pressure is something with which the 10 Chasers not named Harvick or Logano will have to deal.

So which of those drivers has the best chance of winning in the Heart of Dixie?

They’re all capable of making something special happen. After all, history shows that almost anyone can lead the field to the checkered flag at Talladega, but Kyle Busch is a solid choice.

Busch has several things going for him. A warm mention from a week ago, Busch continued his Chase upswing with a fifth in Charlotte. Momentum aside, he has the makeup of a survivor.

Busch has an 80 percent success ratio over the last five races there. That means four of those finishes (second, third, fifth and 12th) are enough to safely qualify him for the penultimate phase of the playoffs. The other, a 37th, surprisingly wasn’t a DNF. The No. 18 team’s ability to fix Busch’s Toyota in the case of another accident could be the difference.

Talladega is an alternate universe where anything is possible. Some of the drivers most likely to break a streak of nine consecutive wins by active Chasers aren’t necessarily those excelling outside of the restrictor plate realm of thought. Because of that, those 10 Chasers could be forced to leave advancement up to the point standings.

For a moment, forget about Stenhouse’s mediocrity at, well, almost every other track this season, and his chances of winning Sunday look pretty good. Stenhouse has done a lot in three career Talladega starts. He’s finished at least 13th in each of them, with a third last October serving as the best result.

Of course there’s also David Ragan, who along with Front Row Motorsports teammate David Gilliland has developed a reputation for showing up out of nowhere on the white flag lap. Ragan has two career wins, one at Daytona International Speedway, and the other at Talladega last season.

Then there are the non-Chasers who came close to earning a playoff berth or who qualified but have already been eliminated. This is their chance for revenge.

Clint Bowyer narrowly missed the Chase cutoff after failing to produce a win over the first 26 races. Still without a breakthrough victory, this could be the week. Bowyer has two prior Talladega wins and consistently stays out of trouble.

Greg Biffle was eliminated from the Chase after the Challenger Round, but he’s still a threat this week. The No. 16 team’s restrictor plate program has been among the best in the series recently and Biffle has produced three top-6 finishes over his last five Talladega starts.

The list of non-Chasers capable of winning is a long one. That isn’t good news for those 10 drivers who could greatly benefit from a victory, but it might not be their biggest problem in some cases. The Big One has proven to be a huge obstacle and something preventing them from producing even a respectable finish, the type of result they’ll need.

Ryan Newman can ill afford a repeat of many of his previous Talladega starts. Newman has failed to finished five of the last 12 races at the 2.66-mile track. His most recent DNF, a result of severe damage, occurred because of his part in a massive 12-car wreck. He finished 18th there in May and has seven finishes of 23rd or worse in his last 10 starts.

Those numbers make Newman the poster boy for a potential letdown, but there are others worth mentioning who could be in for a rough afternoon.

Carl Edwards‘ Aaron’s 499 ended prematurely, less than 10 laps from the finish. The 30th-place finish contributed to a ominous looking record. Edwards has finished inside the top 10 only 25 percent of the time.

The critical conditions of the series’ two most recent champions has gotten worse after they were unable to make up ground in Charlotte.

Jimmie Johnson could only muster a 17th at “the track that Jimmie built” after a 40th at Kansas. Johnson is now 11th in the standings, 26 points behind Kasey Kahne for the all-important transfer spot. That means Johnson needs a win more than anyone. The problem is that he hasn’t done much since his last one in 2011, posting a single finish better than 17th since.

Brad Keselowski is in a similar situation after he squandered away a possible top 5 and had post-race altercations with Denny Hamlin and Matt Kenseth.

Its strange to see Johnson and Keselowski on the verge of elimination after they were a part of the Hendrick Motorsports–Team Penske dominance this season, but at least one of them could lose a shot at the title.

Add Dale Earnhardt, Jr. and Kenseth to the list of drivers on the outside looking in and this Talladega race possesses a lot of tension. For fans it’s going to be beautiful, but I wouldn’t want to be one of the non-qualified Chasers.