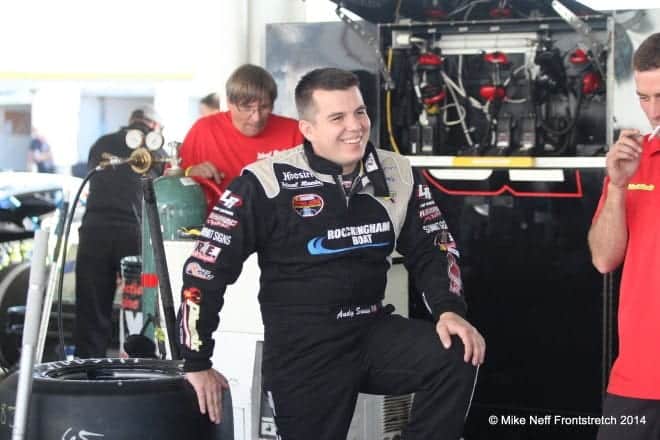 Andy Seuss grew up in New Hampshire just a short drive from the heart of Modified country. He grew up running go-karts and progressed to Modifieds but didn’t have the resources to contend for the Tour in the North. He raced in the South because it was more affordable and caught the eye of some owners who saw that he had the talent to be successful in the very powerful, open-wheeled cars. Seuss relocated to the South this year and has been as focused as ever on winning the Whelen Southern Modified Tour title.

Seuss notched three victories early in the 2014 season and scored 12 top 5 finishes in 14 Southern Tour races. He had to finish 12th or better at Charlotte to secure the title. He did much better, coming home in the fifth position. Seuss didn’t want to talk about the championship before the race was contested but after the checkered flag flew he noted that it was the biggest accomplishment in his life so far. He took a step towards topping that as he asked his girlfriend, Jenn DeMarco, to marry him. She said yes. Before the race Seuss took some time to tell Frontstretch a little about his racing career and his life outside of the car.

Mike Neff: You come into Charlotte with the point lead. How does that make the pressure different from where you’ve come in here in the past chasing the leader?

Andy Seuss: It is ours to lose. There is some pressure there. The car is going to be good, I have a great team behind me. With all of the crazy things that can happen on these tight quarter miles like here and Bowman-Gray, is beyond our control. That is a little nerve wracking. Now that we have had the car on the track and we know it is plenty fast, it is a great car. It is a little bit more comforting but we’ll be holding our breath from now until the checkered flag falls.

Neff: You finished second in the points three times in the Southern Modified Tour. What would it mean to your career to finally get over that hump and win the title?

Seuss: Beyond words. To say it is a dream of mine is quite literal. I won’t believe it is possible until I do it. Just to finish second and have the chance to drive these cars is pretty amazing where I come from. To seal the deal will be indescribable.

Neff: What made you decide to move from New Hampshire to the South to pursue Modified racing?

Seuss: We had been picking and choosing races to run with our family owned car. We didn’t have the money to run the Tour. We’d run in MRS and we’d run some Southern Tour races because they didn’t have pit stops. We had some success down here and it caught the eye of David Riggs (who sadly passed away just before the Charlotte weekend) and later Eddie Harvey. When people like that offer you rides you don’t say no, you just do it. It was the best opportunity I had. I did it commuting for a long time and then last year I stepped up my commitment to the team and moved to the Carolinas and so far it is paying off.

Neff: When you started into racing did you start with bicycles, motorcycles, go-karts or something else?

Seuss: My dad was a mechanic so we always had toys around, whether it was go-karts in the yard or snowmobiles since we were from New Hampshire. We did have dirt bikes and we were thinking about going dirt bike racing. The first time I saw a go-kart race I said ‘this is what I want to do’. He made it happen. We had used go-karts and used motors coming up through the ranks but finally we found some magic. We were lucky because, for a family that couldn’t afford a new go-kart when we started, they made a lot happen for me and we made it up through the ranks. We were lucky to find people in the town to sponsor us and buy race cars and things like that. It has been a long battle but we’ve finally gotten here. It is pretty amazing the trip that it has been.

Neff: You’ve won a lot of titles along the way in go-karts on up. Can you remember any or all of them from the late 90s until now?

Seuss: There were a lot in go-karts but the only one that I’ve won in a Modified was New Smyrna Speed Weeks. That was a similar situation to Charlotte. We went into the last night with the point lead and had to finish within so many spots of our competition. It was an interesting deal where we could have won, we had the best car. That was my first championship in a Modified so I just stayed where I had to, in my own little protective bubble, and it worked out. That wasn’t quite as nerve wracking with the weeks leading up because the whole deal was in one week. That was neat but these last few weeks have been amazing, a little sleepless, but all fun.

Neff: When you aren’t at the track, what do you like to do to have fun?

Seuss: I haven’t done anything fun besides working on race cars in a long time. I’ll have to figure that out. I bought a house down here. I have an amazing girlfriend (who accepted Andy’s marriage proposal after the race) and a dog that we like to have fun with. I work on boats during the week. We’ve acquired a boat and have been spending some time on Lake Norman this summer and that was fun. We take this stuff pretty seriously and we know it doesn’t come easy. This is a full-time team with engineers and all of that. When we aren’t racing we’re thinking about racing and building parts for race cars.

Neff: You mentioned you work on boats. Tell the fans a little about your business that refurbishes boats.

Seuss: My dad owns a boat dealership and I went to all of the schools. It was a bit of a pain for them when I moved away with all of my certifications and my skills in that business. When I moved down here I was more concerned about getting a big garage instead of a home. Finally found a nice big garage and an old home that we needed to fix up. We’ve been running the boat dealership for a couple of years now and it works out well. When I first moved down I had a job and you had to be there during certain hours. I wanted a little more flexibility to be in the race shop with the guys so I stuck my neck out there and so far, so good.

Neff: What is your favorite type of music? What do you like to listen to in order to relax and to get pumped up?

Seuss: If you turn on my iPod right now you’ll hear everything from some rap to classic rock to country. Eddie Harvey walked in the shop one day and I was listening to classical. He thought it was a mistake but that is what I listen to sometimes. That is my alone, relaxation music. A lot of people don’t know that about me and probably don’t expect that from me.

Neff: If you had one place to go for a vacation to get away, where would you go for that vacation?

Seuss: We raced in Lanier, GA and stayed on Lake Lanier in a houseboat. I thought that was one of the neatest things so I have always said, my next big vacation that I’m in charge of I want to stay on a houseboat. We’ve got a cool trip planned to go to Disney World with some friends and family this off-season, so looking forward to that. Pretty lucky to be traveling the country. We always try and spend an extra day or half day in the neat places that we go so we do get to see a lot of the country that way.

Neff: You have an engineering degree. What made you choose engineering and, in the end, does that interfere with what the rest of the team tries to do with your race car?

Seuss: I went to school for engineering at New Hampshire Technical Institute. I wanted to build things and design things. I wanted to have the way of thinking that some people do. It is funny, they do teach you a lot of different ways to learn things and build things. At the same time, growing up in the family that I did, we needed to build our own race car parts so that helped too. My girlfriend is an engineer. It is funny, there is a little bit of tension between the engineers and guys who have been racing their whole life. It is always good to see things from all angles. Sometimes I have to shut my engineer brain off and other times it really pays off.

Seuss: That I don’t know. I’d like to tell you work ethic. I know Georgie is in the shop and thinking about race cars just as much as I am. We really live it. We came down here to do it. We weren’t just born in the area and decided to go racing because racing is big in this area. We came here with a goal and it is paying off.