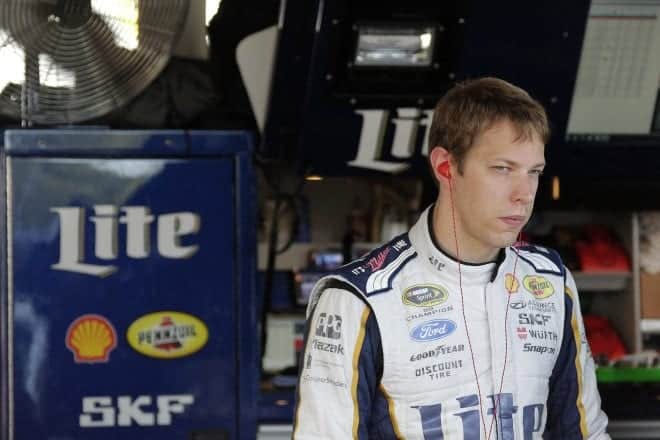 On Tuesday afternoon, NASCAR announced that Brad Keselowski and Tony Stewart will be penalized for actions taken at the Charlotte Motor Speedway on Saturday evening following the Bank of America 500. Keselowski had been fined $50,000, while Stewart will receive discipline of $25,000. Both drivers will also be on probation until Nov. 12 – spanning the next four NASCAR Sprint Cup Series races.

During the Bank of America 500 at Charlotte, Keselowski was having intense battles with Joe Gibbs Racing drivers Matt Kenseth and Denny Hamlin.  In the midst of the chaos, Keselowski tapped the wall; causing him to lose several positions on the track before recording a 16th-place finish.

On the cool-down lap, Keselowski tangled with Hamlin. The No. 11 Toyota was hit by Keselowski in Turn 3 after Hamlin admittedly brake checked Keseloski. The No. 2 Ford then hit the door panel of Kenseth’s car at the entrance of pit road, also hitting Stewart’s Chevrolet in the process. Stewart then backed into Keselowski, causing major damage to the hood of the 2012 Sprint Cup Series Champion’s Ford.

But that wasn’t all that happened.

Heading into the hauler area, Keselowski and Hamlin roared their way through the garage. Hamlin stormed out of his FedEx car, and threw something at Keselowski. A few minutes later, as Keselowski was walking back to his hauler, Kenseth ran up to him – jumping on his back and creating a brawl between the two pit crews as they tried to defend and separate their drivers.

Neither Kenseth or Hamlin were penalized.

“These penalties are about maintaining a safe environment following the race,” said Robin Pemberton, NASCAR senior vice president, competition and racing development. “We knew that the new Chase format was likely going to raise the intensity level and we want our drivers to continue to be themselves. However, the safety of our drivers, crew members, officials, and workers is paramount and we will react when that safety could be compromised.”

Stewart will not appeal his penalty. According to a Twitter post from Sporting News reporter Bob Pockrass, Keseloski will not appeal either. Each of the penalties are classified under Sections 12-1 and 12-4.9, which are “Actions detrimental to stock car racing” and a “Behavioral penalty – involved in a post-race incident,” respectively.

What a joke, Fining multi millionaires pocket change will have no effect. Let’s all act surprised when one of these immature idiots kills someone. PS: Gutless no comment coverage from a tame press. Shame.

this is no longer a sport. it’s just an embarrassment. i feel like i’m watching a flaming train wreck and i can’t tear myself away. clearly there are people smarter than me who chose to no longer watch as evidenced by the ever sinking ratings… i do not feel good about this fact.

Nascar seems to get it wrong quite a lot, why penalize Tony, Brad was the villain, The penalty given
Brad was not nearly enough, he could have caused injury to lots of people ( which thankfully didn’t
happen). Personally, I think the new CHASE is horrible. ” IF IT AIN’T BROKE, DON’T FIX IT.”