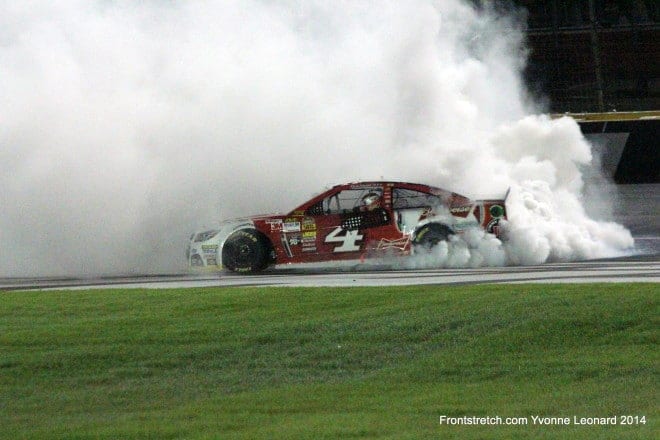 Kevin Harvick exorcised his demons Saturday night, winning his third race of the season, but more importantly locking himself into the eight-driver Eliminator Round. Harvick won the pole and led the most laps, as usual.  This time, however, he was able to survive a late-race caution which set up a two-lap shootout to win the race.

It was a very important race for a number of Chase drivers as poor finishes at Kansas set up a “do or die” scenario at Charlotte with Talladega looming in the wings. Of the four drivers outside the top 8 after Kansas, only one (Kasey Kahne) finished in the top 10. Brad Keselowski, Jimmie Johnson and Dale Earnhardt, Jr. finished 16th, 17th and 20th respectively. What does that mean for these three? Either win at Talladega, or risk not advancing to the Eliminator Round.

A majority of the Chase conversation was overshadowed by the post-race altercations Saturday night involving Denny Hamlin, Matt Kenseth and Brad Keselowski. Hamlin and Kenseth were both upset with Keselowski for on-track incidents. Hamlin was held back by a number of his crew members in the garage and was only able to throw a towel at Keselowski. Kenseth, however, in a rare display of emotion, chased Keselowski down and attacked him between haulers, putting him in a headlock before being separated by crew members. Kevin Harvick said it best in his post-race interview. “When you see Matt Kenseth mad enough to fight, you know that this is intense because that’s way out of character for him.”

Next up is the wildcard restrictor-plate track in Talladega, Ala. A number of drivers need a win to advance to the Eliminator Round. It’s definitely a must-see race. Expect to see the intensity grow each week as we draw closer to the finale at Homestead.