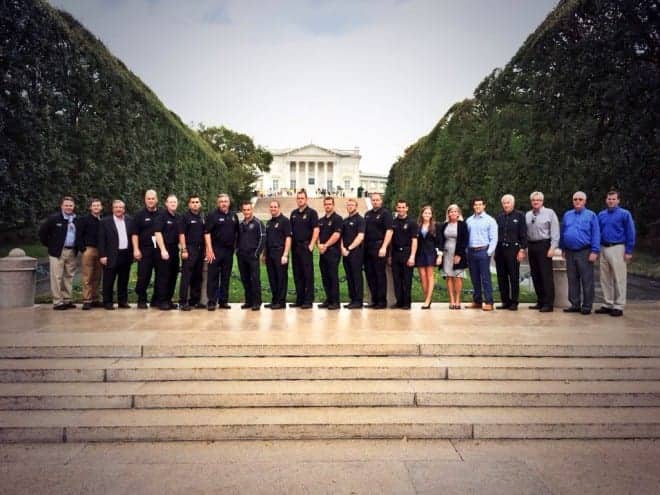 For a time, every branch of the U.S. military was represented on a car somewhere in NASCAR. Then little by little they began to disappear, and after this year, with the announcement of the departure of the National Guard from both NASCAR and IndyCar at the end of the season, the last of them will be gone. The National Guard takes care of its own marketing so really, the Army had already left when they parted ways with their last team, Stewart Haas Racing, a couple of years ago.

It’s no wonder really. The economy, taxes, and government spending have been hot button issues, deservedly so, in recent years. Cutbacks have happened everywhere and there just isn’t as much money to go around, so things like motorsports sponsorships have come under new scrutiny, not just from citizens or government officials as we see on the news, but from the people who handle marketing for the Army, among other branches.

“It just came down to a matter of budget,” admits Mike Sullivan, a director with the Army Brand Group, the office responsible for Army marketing and research. “With reducing budgets and us having to look at our marketing program to see where we could get the best return of investment, return on our dollar, it just got to the point where we had to make some tough calls and NASCAR was one the things we had to reluctantly move away from.”

Sullivan is quick to point out the Army didn’t have any complaints with NASCAR. It was a good program and he credits all the teams they worked with and the drivers as being good spokespeople, but ultimately, the costs to be in NHRA are just simply lower. He didn’t give exact numbers, but it’s safe to say a full season sponsorship on Tony Schumacher’s Top Fuel dragster is a fraction of the cost of the full season on a Sprint Cup Series car. Part of that investment also includes other perks that NHRA, by its nature, can provide that NASCAR just isn’t built to handle.

“The fact that the NHRA as a whole, every fan gets a pit pass, it’s not a commercial. If the Army wanted a commercial they could run a commercial,” said driver Tony Schumacher on a recent Speed Freaks interview. “That all the fans have access to the pits and can talk to a recruiter outside the recruiting station really is what does its job. Our leads, the leads we bring in, the conversion rate from a lead to what it takes to put a soldier in boots, it’s fantastic. We do our job, we do it right, we do it cost effectively, and ultimately we do it as cheap as anything that they could do.”

Sullivan says the program is scrutinized every year to determine what exactly the Army is getting from it. That one on one interaction fans can get by having access to the team and to Schumacher is part of what makes it work, and it works in tandem with the interactive fan zone set up on the midway as well as education programs done with local schools, both by bringing groups to the race track and by sending Schumacher and show cars to the schools for presentations, something the less hectic schedule of the NHRA suits better than NASCAR.

“Tony Schumacher and DSR for going on 15 years we’ve been with them, have been great spokespersons for the Army as far as being able to get around and do things for us in schools, here at the track, at the Pentagon,” says Sullivan.

Schumacher takes his role in the program very seriously. He believes in it and in what it does and he gives it his all, the same as he does with his racing.

“NHRA was the first sport. When Congress passed the law and said hey, let’s go try to recruit, they picked drag racing. We did our job and because we did our job, they were allowed to go to other sports. The other sports are phenomenal TV coverage sports but for the recruiting, the exclusive job of recruiting the American soldier, nobody beats us,” he said.

Sullivan admits Schumacher himself is a tremendous asset and maybe one of the biggest perks of the NHRA program. When the Army entered its current position in the sport in 2000, they did an extensive search to find a team and driver they felt would be a good fit. At the time, Schumacher was drving for Exide, who was leaving, so he made a pitch for the sponsorship that got the Army pretty excited.

“He had the usual haircut that most people had in the late 90s and he walked in and he had done the haircut and he looked the part. He looked like a soldier and he talked like he knew what he was talking about,” says Sullivan. “It was just that sort of thing where you get that feeling that this is the right guy for us and that’s what happened.”

It may have been a pitch initially, but it’s long since become something else. It’s not just new recruits but current soldiers and veterans who are also drawn to “The Sarge.” The Army also made him more than just a mouthpiece and along the way gained a spokesperson who really believes in his product.

“We made it a point in the early years to get him out there to experience the Army, to get him out there to do things a lot of other people wouldn’t do so when he talks on our behalf he’s got that experience,” says Sullivan. “He’s been out with Special Forces and Rangers, he’s been to installations, he’s fired on all the ranges, he’s done all these things so he can talk from a first person experience level in terms of what he’s seen, who he’s talked to. He’s been a very good spokesperson for us and people within the Army really gravitated to him.”

The money may be the biggest deciding factor in the NHRA’s favor, but the other factors contribute to making the whole package strong; interactive zones that are just around the corner from a team and a driver that are accessible; a hospitality area that can host students, recruits, families, and veterans on race weekends; a driver and team that have a schedule that lends itself in a much more friendly fashion to a school-based educational program during the week; finally, a driver that believes in his product and communicates that to potential recruits and current soldiers alike and who they like in return and identify with. There’s no telling how long the relationship will continue. It is evaluated on a year-by-year basis, and right now, it works. As long as it does, we’ll continue to see the U.S. Army dragster on the track.

“I don’t drive for a tool company or a beverage company,” Schumacher said, summing up his commitment. “I drive for a way of life and I’m very behind what I do. I love what I do. I love the American soldier, I love the families, and it has come across clearly. NASCAR, all the other classes have switched drivers many times. We’ve stuck true. I just happen to represent the Army and I’m proud to do it.”

They couldn’t ask for a better spokesperson than Tony. I have seen and talked to him at races, he is very proud of what he does, very humble. That is NHRA though.