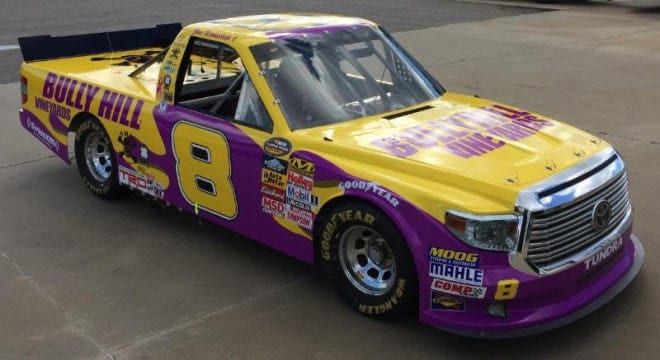 NEMCO Motorsports announced Wednesday that Hammondsport, NY-based Bully Hill Vineyards will serve as the primary sponsor of the No. 8 Toyota Tundra driven by Joe Nemechek in Saturday’s fred’s 250 Powered by Coca-Cola at Talladega Superspeedway. Car chief Austin Pollack hinted at the partnership on Tuesday afternoon with a tweet that featured a small portion of the paint scheme.

Nemechek is very happy to re-ignite his team’s relationship with Bully Hill Vineyards.

“We’re excited to be working with Bully Hill Vineyards again and we like our chances this weekend,” Nemechek said.  “We’ve been knocking on the door this season with top 5s and solid runs, and we feel confident that the win is right around the corner. I think you’ll see the same guys up front who are strong in this series every week but anything can happen in the draft so the plan is to stay out in front and out of trouble. We’ve had a lot of success when we’ve had Bully Hill Vineyards on our race cars and trucks and we’re ready to take them to Victory Lane again.”

While Nemechek himself has never driven a Bully Hill-sponsored entry, NEMCO Motorsports introduced Bully Hill to NASCAR in the late 1990’s.  In 1999, Bully Hill Vineyards first entered NASCAR by signing a one-race deal to sponsor the then-Craftsman Truck Series race at Watkins Glen International.  In addition, the winery sponsored road racing expert Ron Fellows’ ride for NEMCO Motorsports.  Fellows won the pole and and claimed victory.  Six weeks later, Fellows drove NEMCO Motorsports’ Chevrolet Monte Carlo with the giant sun on the nose (Bully Hill’s logo at the time) to a second-place finish behind Jeff Gordon in the Frontier at the Glen.  The relationship between Nemechek and the Finger Lakes winery continued through 2002.

For Bully Hill, the sponsorship is just the latest example of their push back into NASCAR.  Earlier this season, Bully Hill sponsored the K&N Pro Series East race at Watkins Glen, won by Scott Heckert.  The company also sponsored BK Racing’s No. 26 Toyota for Cole Whitt in the Sprint Cup race.  Whitt crashed on lap 10 and finished 43rd.

The fred’s 250, in a change from normal, can be seen Saturday afternoon on FOX.  Coverage starts with NCWTS Setup at 12:30 p.m. ET, with race coverage beginning at 1 p.m. ET.