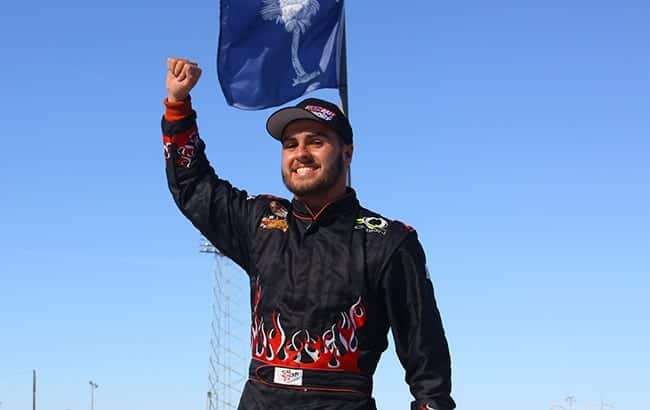 Christian PaHud isn’t the average 21-year-old race car driver. With the help of the Peak Stock Car Dream Challenge held by Michael Waltrip Racing, this young man was able to do something that very few have done over the past few years.

Making his NASCAR K&N Pro Series debut during the NAPA Auto Parts 150 at All American Speedway in California, PaHud sat on the pole after participating in a test just days before the 150-lap event. Entered in the race was the man who gave PaHud the opportunity of a lifetime. NASCAR Sprint Cup Series team owner Michael Waltrip was entered in a third car for Bill McAnally Racing at the .33-mile track, providing support for his newest driver.

“When I won the pole, it was just surreal,” PaHud told Frontstretch.com on Tuesday afternoon. “Everything happened so fast after that. The driver’s meeting was right after that and then the autograph session. By the time we got done with all of that stuff, it was time to race. It helped me keep my mind off of it and not get nervous about the race.”

Although he won the pole award, PaHud didn’t keep the top position for much time. K&N Pro Series West Rookie of the Year James Bickford took the lead from him on the first lap of the contest. For the first 79 laps, the lead swapped around between PaHud’s teammate Brandon McReynolds and championship leader Greg Pursley. However, PaHud was pacing himself – making sure his tires would last until the end of the race.

On Lap 80, he took the lead over Pursley’s No. 26 machine. Holding the top position for 35 laps, he gave it up to McReynolds, but with 24 laps to go in his inaugural race with the organization, PaHud charged back up front to capture the victory.

“It was almost at the point where something had to happen,” he said on the victory. “It was just an amazing deal. The whole Peak Stock Car Dream Challenge was almost the same way. I went into the challenge thinking that we weren’t going to make it in before it ever started.”

“There isn’t any way to explain it other than that it was amazing. Without this competition, I wasn’t even supposed to be out there. It proves that we deserve to be out there and that we can win races.”

With the victory, PaHud follows his predecessor, Patrick Staropoli, who has made four K&N Pro Series West starts since he won the contest. Staropoli won at Irwindale earlier this year, and also won the pole for Iowa race, a combination event with the K&N Pro Series East.

The contest only guarantees that the driver will start one race with the team. However, Staropoli received three more chances behind the wheel, and now serves as an intern for MWR.

“It has been mentioned, but nobody has really set anything yet,” said PaHud. “We are still working on a few things and my relationship with Peak, Bryan Emrich (Chief Marketing Officer of Old World Industries, a marketing company that works with Peak), Michael Waltrip and Bill McAnally Racing. We are going to work out something for the future. I am not sure yet, but we will go from there and see what happens.”