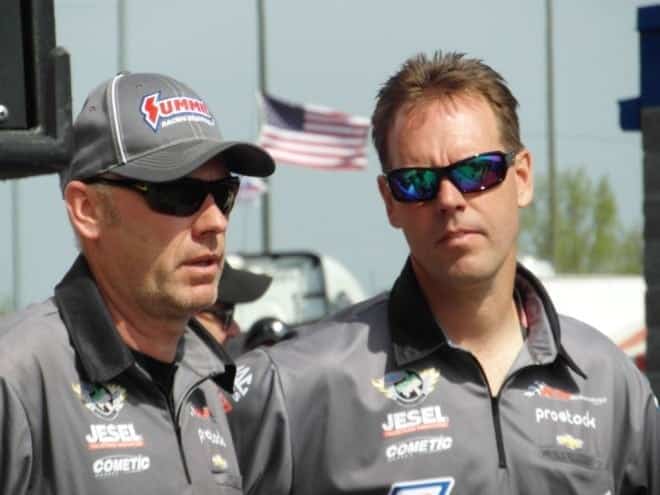 After Jeg Coughlin, Jr. told Toni Montgomery and Mike Neff last month that Jason Line brought his experience in the engine department at Joe Gibbs Racing to Pro Stock and revolutionized the class, there was no question that Frontstretch needed to catch up with Line and find out what he meant.

The current Pro Stock points leader is still hard at work in the shop even though the NHRA is taking a few weeks off before the final two races of the season, but he took a little time out to talk to Toni Montgomery. Line tells us how he went from working on drag racing cars in Minnesota to the world of NASCAR and finally ended up racing a Pro Stock car himself.

Toni Montgomery, Frontstretch.com: Tell me a little bit about your background. You are from Minnesota. How did you get to North Carolina and working in NASCAR?

Jason Line: Bad luck I think? No, it was good luck actually. It’s a really, really long story but the bottom line is I was into drag racing, not into circle track, and honestly I couldn’t have known any less about NASCAR or any kind of circle track racing. My head was pretty much buried into drag racing and I just got the opportunity to come work at Joe Gibbs and just kind of went for it. It was just being at the right place at the right time, more luck than anything.

Montgomery: So were you working in drag racing when the people from Joe Gibbs found you?

Line: I was, yes. I had a dyno shop up in Minnesota. I used to dyno engines for other folks and I had a specific kind of dyno and they had just bought that same type of equipment at Joe Gibbs and they were looking for somebody to run it, sort of make a smooth transition. I happened to be that guy. It worked out really well. I’d like to think it worked out well for both of us.

Montgomery: What years were you working at Joe Gibbs Racing?

Montgomery: So you were there when they were winning some championships?

Line: I was. I was there in the Golden Years, I say. It was a lot of fun and there was a lot of growth and a lot of good things happening, both with Bobby (Labonte) and Tony Stewart. I had a great time and worked for a really good guy over there, my boss, the head engine builder Mark Cronquist. He treated me great. They all treated me good. It was a fun place to be and they gave me an opportunity that was really life changing.

Montgomery: How did you end up going from NASCAR back into drag racing?

Line: I was always a big Pro Stock fan. I loved the Pro Stock cars. I don’t know why but I did. I guess I just like naturally aspirated engines. I used to hang out over at a place in the evenings, a place called Jerico. They built transmissions, they did a lot of Cup transmission at the time. The guy happened to be from Minnesota so I used to go over there. They had an engine dyno over there and a big machine shop. I went over there in the evenings for entertainment as much as anything. I was single at the time so I had nothing else to do. Long story short, Greg Anderson ended up renting shop space from them over there to run his Pro Stock team out of their building so it was kind of a Minnesota connection because Greg is from Minnesota as well. And when he did, I basically volunteered to help him work on stuff just because I loved Pro Stock. I knew who Greg was. He didn’t know who I was but I just wanted to work on a Pro Stock car.

Montgomery: So the love of drag racing just proved to be the stronger draw?

Line: Yeah, for sure. I knew my heart was always in drag racing. I love all forms of motorsports but my dad was a drag racer as a hobbyist and I love muscle cars. It was a natural fit for me. Greg eventually offered me a job and offered me the chance to drive a car. I told him I couldn’t leave my job at Gibbs, because I had a really good job, and the only way I would is if I got a chance to drive and he said ‘Well, we’re going to get a second car, so you can drive it.’ It was kind of crazy really.

Montgomery: I was about to ask how you went from working on engines to driving.

Line: Once again, it was really dumb luck more than anything else.

Montgomery: Two championships later it proved to be a pretty good decision it seems?

Line: Oh I think so, yeah. It’s a heck of a ride. If it ended today I would have no regrets for sure because it’s been a lot of fun and I’ve met a lot of great folks and certainly I’ve had a great time driving a Pro Stock car and racing NHRA.

Montgomery: When we interviewed Jeg Coughlin, Jr., he said that when you came back over from NASCAR you revolutionized the Pro Stock class. I’m curious what he meant. In what way did you revolutionize the class?

Line: He’s probably giving me a little more credit than I deserve, that’s for sure. I think there’s me and a couple of others that came from NASCAR racing to work for Greg and maybe we were privy to some different technology and different way of thinking than maybe other folks had been at the time. All these sports, they’re certainly money driven and the more money you have to spend the more it speeds up your learning curve. We probably brought some new stuff to the table. We certainly made a pretty good splash when we came into drag racing for sure. But we were big fish in a small pond I guess. Like I said, it’s been fun but I think he’s giving me a little more credit than I deserve.

Montgomery: It sounds like it was a smart move on Greg’s part to set up shop in the Charlotte area because he was able to take advantage of that NASCAR connection. Was that by design?

Line: It really doesn’t matter whether he’s in or not as far as that because either way he can help me. Obviously not being in the Countdown, he’s not going to change his place in the standings but either way we need his car to run good. He’s been driving great but we haven’t been able to give him a very good race car. We’re working on that right now. We’re over testing at our little track here today, trying to make his car better. He needs to beat all those other folks who are trying to beat me. He could end up being a huge part of us winning the championship for sure.

Montgomery: So it’s important to get his car running well so he can play a spoiler role?

Montgomery: Do you approach these Countdown races differently than you do the regular season races?

Line: I don’t but I think there’s automatically a little bit different level of intensity. I’ve been very fortunate, I think since we started the Countdown the first year, I’ve been able to get off to very good starts. Making the final at the first couple of races, and that’s good. It catapults you. I think this is the first time I’ve ever entered the Countdown number one. Being number one is great but it’s hard to stay there. It’s super important to get off to a good start and we were fortunate enough to do that again this year, but now we have to finish strong. It’s been up and down for us during the Countdown as it has for everybody else. The competition is so close that to win you have to be error free and we have not been error free. We’ve got our work cut out for us but we’re still leading. My points lead is actually bigger than it was to start the Countdown so I really can’t complain. I’ve been pretty fortunate.