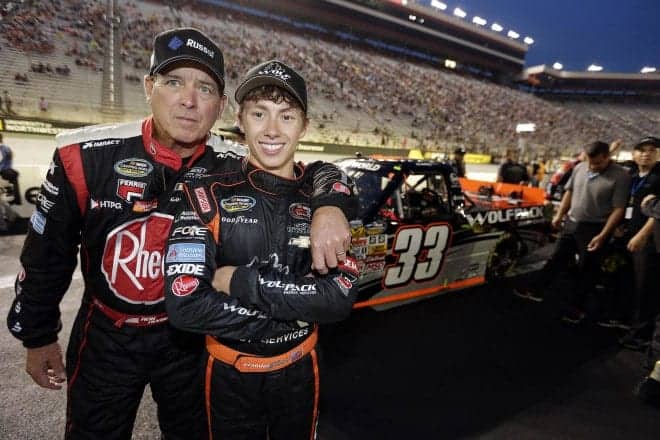 Jones will pilot the No. 33 Chevrolet Silverado with veteran crew chief Shane Huffman calling the shots atop the pit box.

Jones has had a busy 2014 season, with a full K&N Pro Series East schedule that saw him finish fourth in the final standings with a win at Iowa Speedway. He also competed in three ARCA Racing Series races this season, winning two of them at Winchester Speedway and Lucas Oil Raceway Park.

Jones has made six career starts in the Camping World Truck Series, with a career best finish of fourth earlier this year at Dover International Speedway.

“I couldn’t be more excited to continue our NCWTS efforts this season with GMS Racing at Martinsville and Phoenix”, Jones said in a release. “The opportunity to start our relationship at a familiar track like Martinsville is a great benefit and I’m incredibly excited to tackle Phoenix for the first time. GMS Racing has had impressive performances this year and I can’t wait to get back on track working with Shane Huffman and the entire organization.”

“Everyone at GMS Racing is thrilled to welcome Brandon into the fold of the No. 33 Chevrolet Silverado,” Nic Moncher, general manager of GMS Racing, added. “He has shown a great deal of talent this season across every series he has competed in, and we’re looking forward to great performances together at both Martinsville and Phoenix. Brandon has all the tools you like to see in a young driver and he will be a great asset to our Truck Series program.”