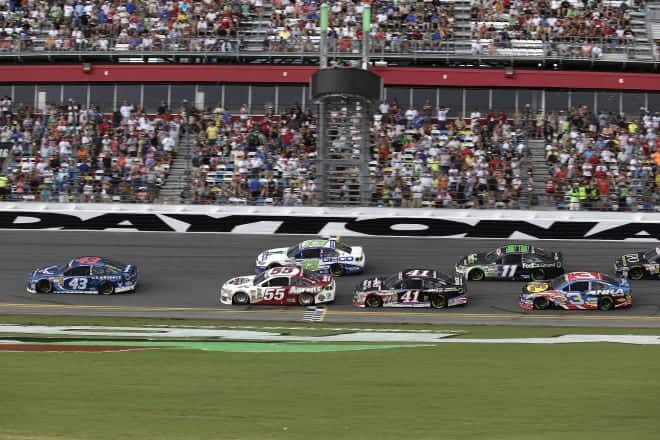 On Wednesday, Daytona International Speedway held a special ceremony to commemorate the halfway point of the track’s $400 million renovation, dubbed “Daytona Rising.”  For the Daytona Rising project, the halfway point entailed the installation of the highest steel beams for the project.  In a special ceremony, a plaque was placed onto the beam, while the construction team responsible signed their names with Sharpies.
International Speedway Corporation (ISC) CEO Lesa France Kennedy (the mother of Camping World Truck Series rookie Ben Kennedy) is very pleased with the progress.”Daytona International Speedway is a special place and we’re honored to continue its legacy through the DAYTONA Rising project,” France Kennedy said.  “We’re literally building history and creating an unprecedented motorsports experience. I can only imagine how exciting it must have been for my grandfather to turn his vision into reality when he built the Speedway more than 50 years ago.”
According to the track, the Daytona Rising project has already seen the installation of 89 percent of the steel beams required, in addition to 26 escalators and four elevators that will direct fans from the five new “injectors” (gates) to the seating areas.  More than 52 tons of concrete has been poured and one million man hours of work has gone into the project.  It is still on schedule for completion in time for the 2016 Daytona 500.  However, Daytona International Speedway has previously stated that some of the new seats will likely be ready for February, 2015.