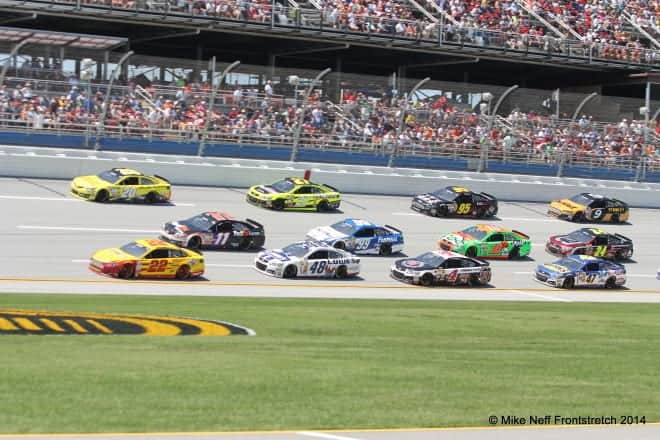 So that’s that, eh?  Let it now be known, that in NASCAR, you can drive around like a complete asstaco and there’s not much they’ll do to you — unless you’re a backmarker and they’d like to make an example out of you but don’t really want to punish a superstar because that might piss off the super-influential owner or the sponsors that are aligned with him in the midst of a new-format playoff system that is bringing the sport some of the attention it so badly desires.

The debate of whether to dock Brad Keselowski points for his stream-of-consciousness outburst had to be a difficult one for the governing body.  What he did was considered ‘off the track’ and thus shouldn’t spill into his efforts of an already completed race.  Yet ‘off the track’ also included other race teams that he put in jeopardy by whipping his car about with little discretion.

So NASCAR went wussy, fining Kes the rough equivalent of a dinner tab for his team, and said that’s that.  Something doesn’t seem right.  It doesn’t matter that the precedent had been something similar when Kurt Busch went nutty against Ryan Newman.  It’s ok to set a new precedent.

What’s worse is that Kes’ confusing display of driver skill brought into the storyline the one driver in the race who did not need any more drama: Tony Stewart.  As if Stewart’s life wasn’t difficult enough, the footage of him backing onto Kes’ No. 2 ride will be used as evidence 1A should a civil trial come to fruition for the awful incident between he and Kevin Ward.

What Keselowski did was beyond questionable.  What Stewart did was understandable, but in context, poor judgment.  What NASCAR did was, well, lame.  But all that doesn’t matter, it got the sport in the news and people talking about it, and that probably makes the folks in Daytona pleased.

Happiness Is… Talladega.  Talladega SuperSpeedway has about as many similes and metaphors as Jeff Gordon does trophies.  Crapshoot.  Lottery.  Roulette.  Chance.  Etc., you get the picture.  Plate racing, on the whole, is one that brings with a division about its merits.  The fact that any success or failure is predicated, with so much emphasis, on the other drivers makes it a unique challenge and open for criticism.

This weekend, with a glob of 43 cars circling the track somewhere around 200 mph, it may be one of the better spectacles.  Three former champions, the aforementioned Keselowski, Jimmie Johnson, and Matt Kenseth are all in solid jeopardy of failing to add another cup to the trophy case should they not win.  Then there’s another champion, Jeff Gordon, who’s in good shape, but still needs a decent finish to secure his passage to the next round.

The good folks at the Talladega track should be sending thank you cards to Charlotte Motor Speedway for making this cutoff race what might be the first one to have some actual drama after earlier ones failed to offer compelling storylines.  But for the spectacle that is restrictor-plate racing, it would be hard for it not to deliver in some capacity — unless the race goes caution free and Joey Logano wins.

Happiness Is… Teamwork.  At Charlotte last Saturday night, one of Denny Hamlin’s pit crew members, jackman Nate Bolling, tore his right tricep.  Ouch.  That’s the kind of injury that usually seems relegated to football.  Bolling is out for the rest of the season as he now recuperates from successful surgery.  OK, that all is a bit of a downer as no one wants to wish injury on anyone in the sport.

What was fun to watch was how smooth the pit crew transitioned to having a new member.  The pit crews have so become so drilled and regimented that they are indeed like football teams.  One member goes down, next man up.  Elements like this one indicate just how much of racing is a total team effort while also demonstrating how far the sport has come in terms of training and the various roles that involved.  It also shows how these pit crew members are often forgotten for all they do.

Happiness Is… Safety.  Formula One driver Jules Bianchi remains in a Japanese hospital as he fights to recover from the diffuse axonal injury he suffered during the Japanese Grand Prix.  Though there have debates about the handling of the race, from its start, to the lack of a safety car, to the mobile crane used on track, all of those things neglect a different aspect of F1 – that as risky as it is, it has become a lot safer.

Drivers in the series must wear accelerometers in their ear so data can from crashes can be collected in efforts to see what may needed to be done.  It turns out that the one in Bianchi’s ear registered at 92 Gs. That’s right, 92 freakin’ Gs.  What that means is that something in the car must have worked because otherwise he wouldn’t be fighting for his life like he’s doing now.  As the doctor’s have intimated, it’s amazing he’s even still alive.  As treacherous as motorsports can be they also are proving grounds for all kinds of advances, which is an often overlooked component.

Happiness Is… Pumpkin Spice Beer.  OK, that all depends on your taste buds, your feelings towards pumpkins, and who sponsors your favorite driver (looking at you Harvick and Keselowski fans).  The arrival and soon departure of the the pumpkin flavored beers, however, is the sure sign that autumn is upon us – while also a sign that NASCAR is once again heading towards the season-ending checkered flag.  There’s but five races left in the season and then it’s the somewhat quieter offseason.  So you better get all your bitchin’ in over the next five weeks because after that, it’s Winter Berry Beer and NASCAR world will be enjoying its cold slumber.

“as Stewarts life wasn’t difficult enough”…stop worrying about it, Tony obviously wasn’t when he put the car in reverse. That wasn’t a love tap, that was a good hit. My eyesight is good according to my
last eye exam.

Next.-“Tony didn’t need any more drama” (..insert laughter). In this particular instance, old Tony was the Captain of his very own destiny ship, and he chose the wrong course. Oh poor Tony, always poor Tony. How is understandable that Tony was mad? Brad was mad and it isn’t understandable? Both were idiots who used their cars, no excuses. Nascar was correct. Rightly or wrongly old Tony just had huge attention on him in the past couple of months, was it wise to do what he did? Hell no.

Nascar has had their characters since inception and Nascar is better for them. I really do not understand the passes over the years that Tony has gotten from fans, Nascar, sponsors and his yes men. I always thought despite his skills as a driver, he was an okele. Many years ago I started thinking this guy has a screw lose, and nothing in recent times via his odd actions and verbal ramblings have made me change my mind.

And I have to ask… RE: “I always thought despite his skills as a driver, he was an okele”.
What does “okele” mean? I tried to google it but other than some references to Hawaii didn’t find anything relatable.

It is a word of Hawaiian origin ….basically, it’s one’s lower back half.

Its kind of hard to say anything about Stewart’s temper tantrum Sat. night that wouldn’t seem like piling on. However there does seem to be a pattern to his behavior. And it doesn’t appear to be limited to Nascar tracks.
But I guess hero worship is its own reward to those who practice it.

You Stewart-haters need to burn one for your martyred victim and mellow the hell out. I get it. Tony is crazy and evil. I submit. You win. You have the motorsports high ground. Go find another cause.

The most biased, blathery rehash of an article I think I’ve ever read on FS. I had to double-check to see if it was actually Summer Bedgood who wrote this.

Speaking of which,,, no “fake” mailbox article (YET). I guess she couldn’t think of any questions to make up and then answer this week… LOL

The non penalties should have come as no surprise, Nascar has been corrupt since its inception and will continue to be until the whim of whatever France is running it is no longer possible. PS: BillB, You missed it! Summer actually asked herself a half interesting question about manufacturer participation.

LOL, ahh, yes the mailbox questions that Summer makes up so she has something to “answer” and tell all of us fans what we SHOULD think.

Ugh, what a terrible article – a mish mosh of absolutely nothing new.

Come now, folks, this article is packed full of useful information. If you have read or watched nothing about racing in over a week, and have no concept of the seasons of the year or when the series ends, this could be your personal Rosetta Stone.