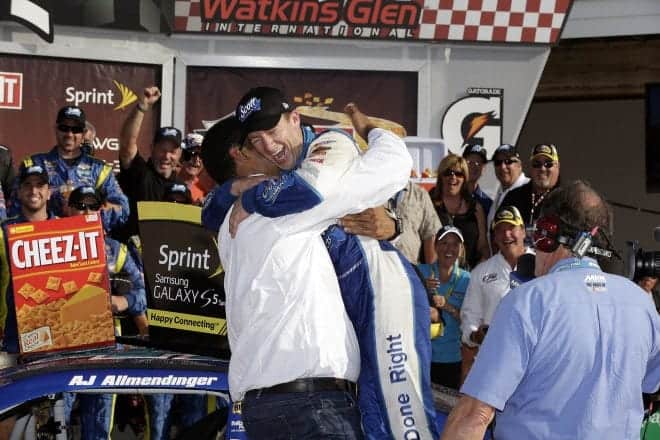 As teams were gearing up for the Chase in August 2013, AJ Allmendinger was looking for a future in NASCAR — any future. He’d been running part time in the Sprint Cup Series for midpack JTG-Daugherty Racing; a couple of Nationwide Series starts with Team Penske, the team that had released him from a full-time Sprint Cup ride in 2012 after a failed NASCAR drug test; some IndyCar races with Penske as well. He’d had some success — but for a seatbelt failure, he had a serious chance of winning the Indianapolis 500, perhaps the most prestigious auto race on American soil. He won both of his Nationwide Series starts, too.

But Allmendinger was without what he wanted most: a full-time Cup ride in a reasonably competitive car. He knew he was considered by many to be damaged goods after that failed drug test. Allmendinger admitted to taking Adderall, a drug commonly prescribed for ADHD, but said it had been a one-time indiscretion. Many fans and media openly questioned his honesty, but Allmendinger completed NASCAR’s Road to Recovery program very quickly, indicating that NASCAR, at least, believed him. And then he started down an even longer road: the road to redemption.

In August 2013 as the elite were preparing for their title runs, Allmendinger signed on to drive the No. 47 for JTG-Daugherty in every race in 2014. On paper, it didn’t seem like much; the No. 47 wasn’t even the best single-car team out there, let alone in the same league as the Penske ride he’d lost. But that kind of ride wasn’t available to Allmendinger, so he took the best ride he could. It would do; certainly it was better than sitting on the sidelines, and it was clear that the No. 47 team needed some revamping. Maybe he could help them compete with the best of the small teams, Furniture Row Racing and Germain Racing. After all, Furniture Row had made the Chase in 2013 thanks to a technical alliance with Richard Childress Racing, and in October of last year, Germain inked a similar deal with RCR.

But in November, JTG-Daugherty also formed a deal with Richard Childress Racing, switching from a bottom-of-the-barrel Toyota team to RCR Chevrolets, with full information sharing to go along with it. Suddenly, things looked brighter… but how far could an underfunded team, with little experience at being truly competitive, really go?

As it turned out, the answer was all the way to the winner’s circle.

For a team who ran midpack for most of 2013, finishing in the top 20 (18th) at Las Vegas last spring was promising. For most small teams, top 20s are a strong day. But for Allmendinger and co., it was just the beginning. Allmendinger finished eighth at Fontana, not a track known for being kind to the smaller teams. He finished 11th at Martinsville the following week, and people started to pay attention.

Then, the No. 47 was 15th at difficult Darlington. They ran sixth at Richmond and cracked the top 5 at Talladega. The question was no longer simply if they could be competitive some weeks. More and more people started to wonder if Allmendinger could do the improbable. Could he take that No. 47 and win?

Early summer wasn’t quite as kind to the JTG-Daugherty crew. Between Talladega and Daytona, the best finish was 21st. But Daytona…well, wasn’t that a small team’s best shot? As it turned out, it was—for Richard Petty Motorsports. Allmendinger’s former ride roared into a makeshift Victory Lane with Aric Almirola at the wheel while Germain Racing made a splash with a top 5. But Allmendinger finished dead last, the victim of an early crash.

But anyone who’s paid attention to Allmendinger in recent years knows that he’s good on a road course. Really good. His two Nationwide Series wins last year came on road courses, and as the Sprint Cup Series headed north to Watkins Glen in August, his name was in the conversation of dark horse possibilities. With new rules for getting into the Chase, winning was at a premium, and the No. 47 was bandied about as a team who could win their way in at the Glen. Richard Petty Motorsports’ Marcos Ambrose, though, was heavily favored to take the checkers, having won that very race in 2011 and 2012. RPM was still a slightly stronger team overall than JTG-Daugherty, so most figured if there was to be an upset that Sunday, it would come from Ambrose.

And it almost did. When the checkers fell and the dust cleared, Ambrose was in second place. But AJ Allmendinger was in Victory Lane.

The celebration was memorable. The emotion — from Allmendinger, who found redemption that day in upstate New York, from team owners Brad Daugherty and Tad and Jodi Geshichter — was pure joy and memorable in its depth. The champagne was sweet, knowing what they had accomplished — a thrown-away driver and owners who knew the Goliaths they were up against and did it anyway — was even sweeter.

A year after inking the deal to drive the No. 47, Allmendinger made it the car a title contender.

That he (narrowly) missed the cut and was eliminated after the third race is, in a way, immaterial. Allmendinger and his team had done what they set out to do. Everybody knew they were there. Some said they didn’t belong, but they proved they did long before Dover. There was nothing left to prove.

Yet, Allmendinger has gone right on proving his Chase bid was no fluke. Had he made the cut after Dover, he’d be solidly in eighth place heading to Talladega this weekend and looking at a good possibility of making the round of eight, maybe even the final four. He has as good a shot as anyone at winning this weekend; the top 5 last spring shows that. If he does that, it won’t change much — he’s already 13th in points, the highest he can finish (and better than 10 spots ahead of where his team finished 2013). But he’d also eliminate three heavy title favorites from contention, and put an exclamation point on his improbable season.

And if he doesn’t? It doesn’t really matter. AJ Allmendinger has found redemption and then some. JTG-Daugherty Racing has surpassed most people’s wildest expectations. Everybody knew they were there. Just like they know that come 2015, they’ll be back.

Did you forget about Kyle Larson and Jamie McMurray when you wrote this? Both of them have far outperformed Allmendinger this year and both have outperformed him in most of the Chase races even though neither of them was in the Chase. Nothing against Allmendinger and he has improved noticeably this season, but he still has quite a bit to learn about driving stock cars, I says.

The article is about AJ.

Both should be outperforming them considering their cars have more than double the budget and resources. So no the author did not forget about them he was just using logic and only comparing AJ’s team to other teams with similar budgets. I’m not real sure why you think that comparison is valid.

Pokey I guess your name is Pokey because your a bit slow. Larson and Mcmurrays teams have budgets that AJ’s team can only dream about so that is like comparing apples to oranges.

Pokey, I don’t get it either. Almendinger has been the architect of his own misfortunes. Maybe without the DUI and the drug suspension he would be in a better ride. Why someone surviving shooting himself in the foot is a supposed feel good story is a mystery to me.

PS: Stevie, using your instead of you’re when calling someone slow tends to make one look, well, slower.

Nice column, Amy. I believe that had Allmendinger not blown his opportunity with Penske (with Adderal of all things) he’d probably be as successful as Logano. That’s a moot point and there’s no way to know, but I just think he has the talent to be a top contender.

Actually…he can finish higher than 13th in points….