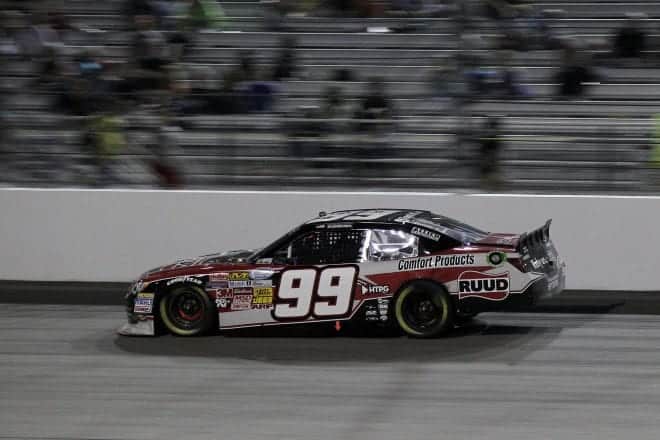 The NASCAR Nationwide Series season is off for two weeks, and it is much-needed for plenty of teams. While gearing up for the final three races of the 2014 season, organizations will have a chance to prepare new things for next year, hoping to get an edge on their competitors.

Entering this season, RAB Racing was set to have a breakout performance. But after an impressive season with Alex Bowman behind the wheel for all but one race last year, things have not gone too well in 2014 for the team, with just 14 finishes on the lead lap through 30 events after hiring a new driver.

Unfamiliarity due to a new driver? Sure, perhaps. Except that driver was 2012 NASCAR Camping World Truck Series champion James Buescher, who joined RAB Racing during the off-season. Given his success both in the Camping World Truck Series and in part-time Nationwide competition, Buescher was expected to at least race inside of the top 10 on a weekly basis, perhaps even contend for wins.

However, that hasn’t been the case. He has an average finish of merely 17.7, which has caused him to slip to 10th in the driver standings.

“I think if we can get to Victory Lane, and be a contender for the championship, that would be accomplishing our goals,” Buescher told me prior to the season-opener at Daytona. “Obviously, having won a championship in the Truck Series, my goal is to do the same thing (in the Nationwide Series). I feel like we have what it takes to do that, we just need to put together a solid season and stay consistent all year. We need to keep improving every week, and I think we will be able to do that.”

But a lot has changed for this one-car operation since Daytona.

Chris Rice, who was with the team since 2012, left in June for NTS Motorsports, now serving as the competition director for their Camping World Truck Series program and taking on a crew chief role in certain races. Rice was replaced by Matthew Lucas, a former crew chief at Joe Gibbs Racing. Lucas notably won a pair of contests with Matt Kenseth last season in the Nationwide Series, and also saw success with Denny Hamlin during the 2012 season.

But interestingly, with Rice as Buescher’s crew chief, the No. 99 car finished outside of the top 20 on just two occasions (Darlington and Talladega). Meanwhile, with Lucas joining midway through the season, the team has comparatively struggled. In the 16 races since Lucas took over, Buescher has one top-10 finish (at Bristol), but also seven finishes of 20th or worse.

This team just hasn’t clicked – and that’s with a crew chief that won at a big team with top-level drivers. According to Buescher, they had very high expectations entering the year. But with plenty of bad luck in the second half of the season, they seem to have hit a plateau.

Not only does Lucas have better results under his belt. Buescher is capable of running better, too. He won six Truck Series events over a two-year span, but has not even recorded a finish surpassing ninth place this year. Part of his struggles has been qualifying. The team has an averaging starting position of 16.1, and has started inside of the top 10 only twice this year (Bristol and Talladega). That has killed their track position from the get-go, causing them to get lapped early in events. Although Buescher is often able to overcome the adversity of getting lapped, there are some races, such as Iowa or Atlanta, where just about everything seems to go wrong.

The organization has also made a splash in the Sprint Cup Series in a supremely limited capacity this year.

Joe Nemechek attempted to qualify the No. 29 Toyota at Daytona in July, but missed the show. Matt Crafton then followed Nemechek’s DNQ with one of his own – this time at Indianapolis. In both events, the car was off the pace by a large chunk of time.

They’ll be making an attempt at Talladega this weekend with Nemechek, but doing so might be hurting their performance on the Nationwide Series side – something Buescher and Co. absolutely do not need.

Taking away resources from Buescher doesn’t just include trying to race in the Cup Series, but running a second team in the Nationwide Series as well.

Scott Lagasse, Jr., Kelly Admiraal, Milka Duno, Daniel Suarez and veteran Kenny Wallace have each made spot starts in the No. 29 Toyota, the part-time partner to the No. 99, this year. None of them have started more than two events. Suarez has the best finish among the five drivers with a 15th-place result at Chicagoland. Admiraal blew an engine in one of his starts and Duno didn’t qualify for two events before suffering a wreck in the third lap of her Nationwide Series debut at Kansas.

The second team has been anything but a success for RAB Racing, and one wonders if it’s hurting Buescher’s team, too. If RAB wants Buescher to start recording top-10 finishes, perhaps it is going to need to throw everything at the No. 99 team.

Though there’s sponsorship support from Rheem, the team will need to step it up heading into the final handful of races this year, with the possibility of reuniting in 2015.

Otherwise, consider this experiment a bust.

Final edit: The NASCAR Nationwide Series is off for two weeks and no one will notice. End column.

Now THAT is funny…and yet very sad at the same time. Where’s Randy Lajoie and the Green brothers when you need them?