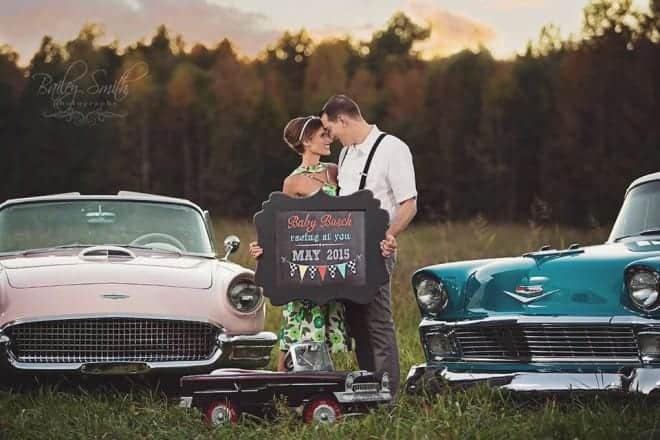 The Busch’s are bringing along some competition for Cash Bowyer. In a post on Facebook, Samantha Busch broke the news with a retro themed picture featuring the pink Ford Thunderbird that Kyle purchased for her at the Scottsdale Barrett-Jackson auction. The couple is wearing 50s era clothing, standing in front of the Thunderbird and a l1956 Chevrolet. There is a 50s Chevy inspired pedal car in front of the couple who are holding a sign that says “Racing at you in May 2015”.

Clint Bowyer’s wife Lorra gave birth to their son Cash earlier this year and Regan Smith has announced that he is going to welcome a child in early 2015. This is similar to 2010 when several drivers had children in a short period of time. Jeff Gordon, jimmie Johnson, Juan Pablo Montoya, Carl Edwards and Elliott Sadler all welcomed children that season.

With the baby due in May of 2015 it just may bring some good luck to Kyle Busch who has long struggled to put his car in Victory Lane at Charlotte Motor Speedway.

Interesting photo there, Mr. and Ms. Busch! A 1957 Thunderbird, a 1956 Chevrolet Bel Air, and a kiddy car peddle car that looks like a 1955 Chevy. What did the powers at Toyota say about that?