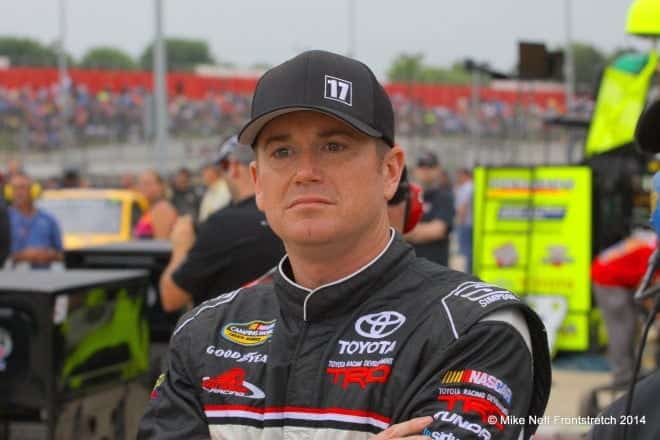 Timothy Peters finally broke through in 2014, holding off the field on a green-white-checkered finish, to score the win in the fred’s 250 powered by Coca Cola at Talladega Superspeedway Saturday afternoon. Peters held off Tayler Malsam by 0.143 seconds to score his eighth career Truck Series win. Spencer Gallagher finished a career best third, followed by polesitter Tyler Reddick in fourth. Despite going a lap down for a pit road speeding penalty under green, Ryan Blaney rallied to round out the top 5. Young gun Erik Jones finished sixth, and Chris Fontaine matched his career best finish in seventh. John Wes Townley came home eighth, while Darrell Wallace, Jr., who started deep in the field, finished ninth. Joe Nemechek rounded out the top 10 despite a pass through penalty for tandem drafting.

Ryan Blaney capitalized on a sub-par afternoon by Matt Crafton to cut into Crafton’s lead on the championship with four races to go. Crafton finished 14th and left Talladega with a 16 point lead on Blaney. Darrell Wallace, Jr. is third, just 28 points back. Johnny Sauter is fourth after a disastrous day at Talladega and now sits 36 markers behind his ThorSport Racing teammate. Race winner Timothy Peters rounds out the top 5, 77 points behind Crafton.

Spencer Gallagher scored his best career finish in the Truck Series with a third-place run Saturday afternoon at Talladega. Paired with his first ARCA Series win at Kansas three weeks ago, the top 5 gives Gallagher a great foundation to build from for 2015.

Ryan Blaney overcame a pit road speeding penalty and finished fifth allowing him to cut into Crafton’s championship lead. The margin of 16 points with four races to go isn’t insurmountable, but Blaney needs to pick up a win or two to ramp the pressure up on the No.88 team.

Matt Crafton had a roller-coaster day on Saturday that started with pit road contact with Bryan Silas as he was leaving his pit. Then, he was black flagged for tandem drafting with Joe Nemechek. The 14th-place finish has to feel like a win, and Crafton is probably grateful his championship lead didn’t shrink more than it did.

Johnny Sauter’s hopes for a championship in 2014 were all but ended by a bolt through the radiator of his No.98 Toyota on lap 24. Sauter was credited with a 31st-place finish and now needs a miracle to get back in contention before Homestead.

The Camping World Truck Series heads back to the paper clip at Martinsville Speedway next Saturday for the Kroger 200. The green flag is scheduled for 1:46 p.m. ET on Fox Sports 1.