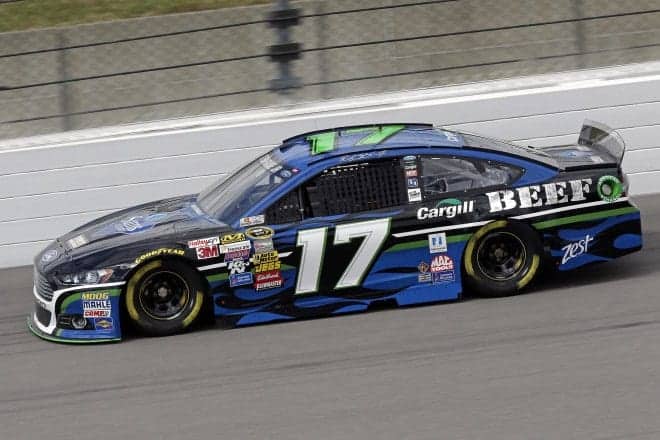 The race that everyone in the NASCAR world has had circled on their calendars since the Chase began has arrived. It’s big, it’s bad, it’s fast. It’s Talladega.

After a race at Charlotte last week that saw fireworks erupt between Chasers Brad Keselowski, Denny Hamlin, and Matt Kenseth in the garage area, NASCAR has been in the mainstream spotlight all week leading up until today. The tension of this new Chase format has boileth over, and with another elimination on tap for today, at the most unpredictable track on the circuit, the tension is set to reach an even higher crescendo.

Top contenders like Dale Earnhardt, Jr., Brad Keselowski and Jimmie Johnson could all face elimination without a win. Fringe-level Chasers like Kasey Kahne and Denny Hamlin will be trying to avoid getting bumped below the cutoff line. The whole field will be on-edge trying to master the Talladega draft and steal a win. It’s a big day for the sport today, and anything could happen. Let’s dive in then, shall we?

1. What sorts of strategies will be employed by the Chasers?

Everyone with internet access has tried to determine what the ideal strategy for Talladega success will be for the Chasers. And the funny part is that I’m not sure that any of them will end up being right.

Seemingly everyone appears to be under the impression that the “best strategy” for Talladega will be to ride in the back, let everyone wreck, and then pick through the shattered remains of the field unscathed. Not only is such a laissez faire approach to the race lazy and non-competitive, it has been proven time and time again that it never works. Jimmie Johnson and Dale Earnhardt, Jr. tried it in the 2011 race here. It failed. Earnhardt tried it again in the spring race earlier this year here as well. It also failed.

There are many more examples to further this point if you feel compelled to look. The reality is as such: when winning is the only true guarantee for advancing to the next round of the Chase for the vast majority of the remaining Chasers, hanging out in the back of the pack is simply not a sound strategy. It is impossible to predict when the Big One will happen, so you’re best bet is to actually, you know, race! I know, crazy right?

The front of the pack is the only truly safe place to be, especially since passing is more difficult under this aero package. With that in mind, any Chaser that actually wants to net a good finish today would be wise to try and stay towards the front. Regardless, the varying strategies employed today will bear watching nonetheless.

2. Will the JGR cars rule the draft?

The hot rumor throughout the garage area all weekend has been that Toyota Racing Development made some serious strides in the horsepower department with their plate racing program. If you’ll think back to earlier this season, you’ll probably remember how strong the JGR cars already were during both Daytona Speedweeks and the Spring Talladega weekend. JGR cars won every race during Speedweeks save for the 500, and Denny Hamlin won at Talladega. Clearly, the team has something figured out on the plate tracks right now.

Obviously you can see why this is relevant for today. With three drivers all still needing to advance to the next round, a win (and by extension, an Eliminator Round berth) by any of the three JGR cars would be a huge boon for the organization, especially given how off the pace the whole team was entering the Chase.

Of the three drivers, the one who needs the win the most would have to be Matt Kenseth. Kyle Busch figures to get into the Chase on points alone, while Hamlin is relatively safe to get in on points as well. Kenseth, on the other hand, is outside of the next round’s cut line, so a win is essentially a must today for him or anyone else outside the Chase cutoff to advance. Luckily for Kenseth, he will apparently be sporting the strongest plate-motor in the garage and is arguably one of the three or four most skilled plate racers on the circuit.

Could Kenseth put last week behind him and fight his way back into title contention? I think that will be a very intriguing story to watch all day today.

3. Which Dale Earnhardt, Jr. is going to show up today?

Over the past few years, Dale Earnhardt, Jr. has been something of a Dr. Jekyll and Mr. Hyde in restrictor plate races. In some races, Junior races with authority, showing signs of the driver who at one point was the undisputed king of restrictor plate racing. That Junior was certainly alive and well in this year’s Daytona 500, which will likely go down as one of Junior’s most well-earned victories.

The problem for Junior in recent years is that for every time the aggressive Dale, Jr. shows up, he seems to balance it out by racing the next race timidly and conservatively, which is pretty much the worst possible way to find success in a plate race.

In this race last year, Junior decided to race aggressively and authoritatively, and he was rewarded with a second-place finish. Should Junior decide to race in a similarly authoritative manner today (which is he plenty capable of), there is no reason for Junior not to be a factor all race long. And frankly, that is pretty much the only way that Junior is going to have any shot at transferring into the next round of the Chase. If he decides to dog it all race long and hang out back to avoid wrecks…well, I hope he doesn’t complain when he misses the Chase cutoff.

Long story short: Dale Earnhardt, Jr. is far too skilled at plate racing to not be a factor in today’s finish. As such, the way he races all day long today will say a lot about how much he wants to still be a factor in the title chase this year.

4. Will the qualifying shake up?

Did you catch qualifying yesterday? It was pretty… um… interesting. I could probably write a full article on how borked the current superspeedway qualifying system is, but in the interest of keeping this article focused on the race today, I will refrain from spewing vitriol over the weirdness of yesterday’s qualifying session.

All of that being said, that qualifying wackiness led to a very topsy-turvy qualifying lineup for today’s race, and that very fact could have a great deal of impact on the results of today’s event. Why is that? Well… there’s a few things to keep in mind here.

Flashing back to the this year’s Daytona summer race, you’ll probably remember that the starting lineup for that race was similarly wacky due to rain interrupting the qualifying session. You’ll probably also remember that the sheer number of slow, underfunded cars that started at the front of the field in that race jammed up the field early in the going and helped contribute to a massive accident that took out a number of contenders. With a similar looking starting grid on tap for today, one peppered with many underfunded cars throughout the top 10, it’s conceivable that the early laps could see some carnage as the fast cars attempt to make their way to the front.

On top of that, with how difficult it is to pass under the new aero rules, guys who are stuck at the back (like Jeff Gordon, who starts P43) will have their work cut out for them trying to get to the front of the field. All told, it could make for some interesting racing throughout the day.

While the qualifying yesterday was a complete joke, just like the chase, it was good to see some of these guys who have been playing games all year with this format to finally get burned. Or, were they? A lot of the joksters, I mean chasers, starting at the rear. The not-so-much surprize was Stenhouse missing the show. Bet Danica and her fans are laughing! In a way, it looks good on Roush to have one of his teams have to go home. Hopefully, Stenhouse’s sponsors will be paying Roush an unfriendly visit Monday and pull their sponsorship. And maybe Stenhouse will be told to look for another job. And maybe now, someone at that organization will finally do something! Maybe Roush will finally step away and let things get done. Ford, and investor John Henry, must be pissed at the ol’ Cat In The Hat!

Michael in SoCal
Reply to  Ken

My guess is that with the success Ford is having with Team Penske, the only time you’d hear the name Roush in Detroit would be “Roush who?”

Talledega, Plate racing, fast, random, deadly and still somehow boring. Watch, or like the growing number of ex fans, do not as luck becomes the primary factor in determining a pretend Champion in an increasingly pretend competition. Maybe two or three millionaires will have a post race slap fight! I am very curious to see if viewership and attendance continue to decline for this “race”.

Stenhouse’s departure was a shocker but that’s how it goes in a new format when qualifying rules are shifting. Can you imagine if someone still in the Chase hadn’t qualified? That is the sort of scrutiny NASCAR doesn’t want but probably needs. Actually, who am I kidding? This ship won’t be righted until Brian clears out. He’s pretty much made a mess since he took over.

Watching the ratings continue to fall with each race makes one wonder where the series is headed long term.