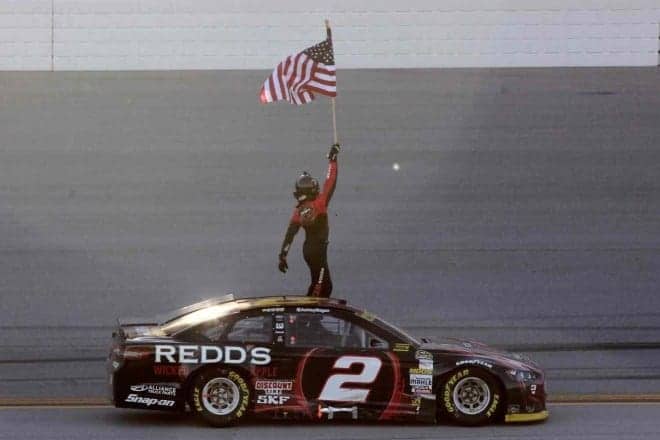 As predicted, it took until the checkered flag before we knew who would be moving on to the eight-driver Eliminator Round. Brad Keselowski, Jimmie Johnson, Dale Earnhardt, Jr. and Matt Kenseth all knew what they had to do to continue their bid for a championship: win. Johnson led the most laps, Earnhardt, Jr. led the second most laps, but in the end, Brad Keselowski (coincidentally pushed by Matt Kenseth) won the race, finalizing Keselowski’s advancement to the next round. Sunday’s win was the sixth of the season and 11th overall for Team Penske, a new season-high for the team.

Talladega is always a race that produces surprise finishes and this past weekend was no exception. Only three drivers (Brad Keselowski, Ryan Newman and Kevin Harvick) in the Power Rankings top 10 after Charlotte finished in the top 10 at Talladega. However the bigger story was the four drivers eliminated from the championship. Three of the four Hendrick Motorsports drivers (Kasey Kahne, Jimmie Johnson and Dale Earnhardt, Jr.) were eliminated, along with Kyle Busch, who was involved in the race’s big one.

The points reset once again and the top eight head to Martinsville, which just might bring as much action as we’ve seen at Charlotte and Talladega combined. Only three opportunities remain for drivers to win and punch their ticket to Homestead. But before the beating and banging begins, see if your favorite driver survived Talladega and made the top 15.

I simply want to mention I’m beginner to weblog and absolutely liked your web page. Likely I’m want to bookmark your site . You actually have perfect well written articles. Appreciate it for sharing your website page.

Wow, amazing blog layout! How long have you been blogging for? you made blogging look easy. The overall look of your site is magnificent, let alone the content!

why not try here

I simply want to say I am just newbie to blogging and site-building and definitely enjoyed your blog. Probably I’m planning to bookmark your website . You really come with good writings. Thanks a lot for sharing your website.