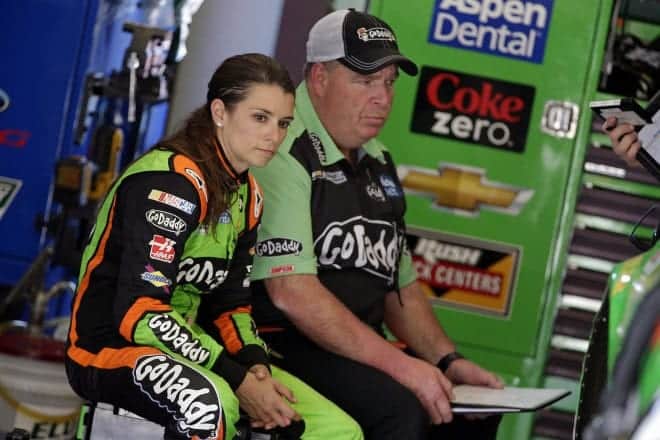 In what the team termed as an “evaluation” move, Stewart-Haas Racing announced earlier this week that it would swap the crew chiefs and road crews for the Nos. 10 and 41 teams of drivers Danica Patrick and Kurt Busch.

Vice President of Competition Greg Zipadelli said the move was made “to get a head start on 2015. With the ban on testing next year, the last three races of this season take on even greater importance. For Tony Gibson and Kurt, they’ll get three races together that will provide direction for next year. And for Daniel Knost and Danica, this is an opportunity for them develop a rapport that could potentially continue into 2015.”

The teams will not switch pit crews, but the people who work on the cars in other ways during the weekend will move with their crew chiefs.

It makes sense to make this type of change now for both Patrick and Busch. Both drivers are out of title contention and looking forward to next year, so it’s the right move for a pair who need to come out swinging if they hope to see improvement.   It also sounds as this move is a bit of an audition for first-year head wrench Knost to see whether the team wishes to keep him in that role next year. Again, that makes sense.

But does this particular move make sense?

Well, maybe. But maybe not. For Busch, it’s hard to argue that changes needed to be made. Yeah, he won a race and made the Chase, but let’s be realistic: Busch hardly had a championship-caliber season. He’s had just nine top-10 finishes in 32 races. If not for the Chase reset, Busch would now be a distant 20th in points; instead, he’s hanging on in 15th, still far from the top. Something had to give, and fresh blood might be a step in the right direction.

But for Patrick, a change might not be the answer. No, her season hasn’t been brilliant. She has just three top 10s, but that’s a 75 percent improvement over her previous career total. Her average finish has improved by three spots, and she is learning. No crew chief is going to turn her into Jimmie Johnson overnight. Even Chad Knaus, if he was made available (and he won’t be), isn’t a miracle worker.

But Patrick and Tony Gibson have had a strong working relationship over the past two seasons, and she’s had some solid races this year, some better than the finishes show. She has learned to feel the cars better and communicate that feel more effectively to Gibson.

So why make a change when Patrick was just starting to get a foothold? It seems like a 50-50 proposition at best; maybe another crew chief will be a magic bullet and Patrick will become a top-20 driver. But maybe she will have to start from scratch in learning to communicate her cars. Some drivers and crew chiefs never learn to work together effectively, and for others, a working relationship takes weeks or months. It’s never an overnight success.

It might have made more sense in the long run to give Patrick and Gibson one more year and make changes if there isn’t improvement. Patrick looks comfortable in a Cup car for the first time in the second half of this season. She’s taking them closer to the ragged edge than before.

If indeed a change is the right prescription for Patrick, then it may be that Knost isn’t the right fit, and hence the interim status. He’s still new at the position, and Patrick’s learning curve suggests that a veteran might be a better choice for her. They could, of course, click and take off. It’s happened before, but it’s unlikely with this pairing.

It’s natural for an organization to want to make swaps within its own shop when it can. Part of that is loyalty and the thought that it has already hired the best employees and need to fit them in the best slots. Another piece is that teams guard many secrets to their performance that they don’t want to send packing along with an employee. A third element is chemistry, which can be hard to create, and teams who have it already are understandably reluctant to add an unknown to the mixture.

But internal swaps aren’t always effective. Whether that’s because someone in the mix isn’t really happy with the situation, disrupting the chemistry, or because the problem is less in the personnel and more on the mechanical side, it’s hard to say. Maybe the way an organization is structured simply doesn’t work for some people, and they’re tapped out. Even within Stewart-Haas Racing, an earlier pit crew swap between the teams of Tony Stewart and Kevin Harvick hasn’t reaped the results for which the teams had hoped.

If the reason for the swaps is based on personality and not mistakes or mechanics, they can be successful. Hendrick Motorsports made a swap that included pairing Alan Gustafson with Jeff Gordon and Steve Letarte with Dale Earnhardt, Jr. That change gave Gordon what he, as a veteran with titles under his belt, needed in a technical guru who doesn’t need to coach his driver. Gordon didn’t need a coach; he needed someone who could take his feedback and make his cars go faster. Earnhardt, on the other hand, needed a crew chief who could keep him focused when frustration took over – in essence, someone who would tell him to shut up and drive rather than becoming ineffective on track. Both Earnhardt and Gordon have thrived in the last couple of seasons.

At the end of the day, the Stewart-Haas switch can work, and likely will make a difference for Kurt Busch and the No. 41. Busch, as a driver, is already among the spot’s elite. Gibson is a good choice for him, because he is unlikely to put up with Busch’s moments of frustration that he often takes out on his team. Busch can take his team to a title if the right pieces are in place.

For Patrick, it’s less of a safe bet. She and Gibson seemed to gel quite well, and she’s at a point in her development where having to learn a new communication style could be a setback when she was finally starting to show signs of improvement. On the other hand, if there was a gap in what she was saying and what Gibson was doing, there’s a chance that someone new will understand her and move forward. Whether Knost is that person is a question because he’s also inexperienced, and in this case, an outside hire might bring something different to the table.

For now, don’t expect overnight success for either Busch or Patrick; even the perfect match takes time to solidify, and the cars for the last four races are already mostly prepared by the former crew chiefs. In the spring, there will be answers. For now, it could go either way.

Women in black dresses paraded down the catwalk moments before the show started, arms aloft as they sprayed the air with perfume to help set the proper ambiance for the clothes.

Some shoes had unmatched colors and headgear was eccentric, with one model sporting a turban-style piece and another wearing a seemingly solid helmet-style hat that looked to be made of blue shimmering metal.

a great deal of would be determined by your amounts really.

I just want to say I’m new to weblog and truly savored you’re blog site. Most likely I’m going to bookmark your site . You actually come with really good well written articles. Thanks a bunch for sharing your webpage.

Emu shoes bear in mind that adolescent womans firmly reckon that they need in their lives is UGG.

A third play was previously “who have Sang who 80’s tune, that you had a long list of 8 singers/groups I competed a song by- one of the performers plus had to write down the number alongside the individual they reflection sang and.

you’ll have one simple perception of the and you should know about the color that suits you.