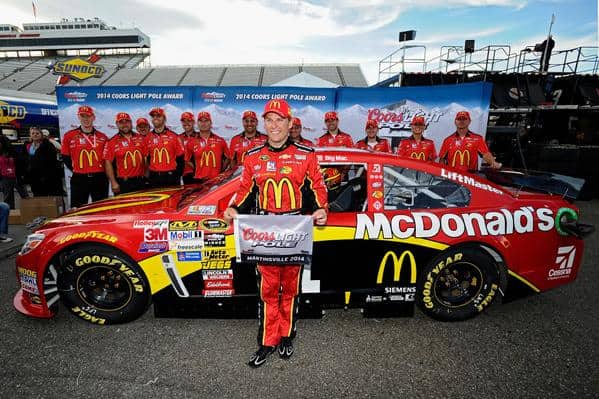 Jamie McMurray crashed the Chase party at Martinsville Speedway on Friday and will start on the pole for Sunday’s Goody’s Headache Relief Shot 500. With a speed of 99.905 mph, McMurray edged Joey Logano, who will start alongside on the front row. Matt Kenseth, Tony Stewart and Denny Hamlin rounded out the top 5.

McMurray was quick to credit his team for his pole-winning car after they had a successful test at Martinsville. “This is a great track for me and we had a really good test.  When things are going well you get excited to come back to the track,” McMurray said after qualifying.  “It was great that we were able to take that test and use that towards earning the pole today.  Keith (Rodden, crew chief) and Josh (Sell, engineer) made really good adjustments on our car from the first run to the second run really that was a difference maker.”

I just want to mention I am all new to blogging and definitely enjoyed you’re blog. Very likely I’m going to bookmark your site . You definitely have beneficial articles and reviews. Thank you for sharing your web-site.