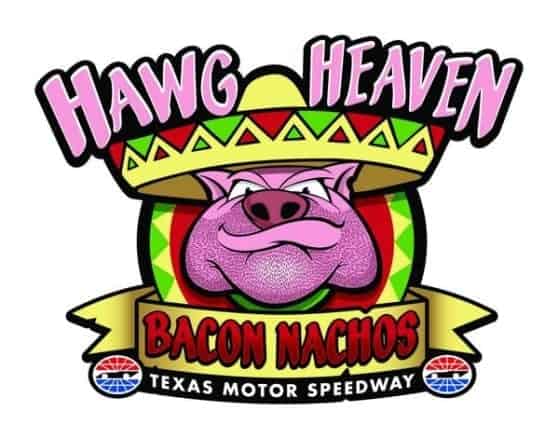 On Thursday, Texas Motor Speedway and Levy Restaurants teamed up to unveil a new bacon-infused product that will be featured during the AAA Texas 500 weekend at the 1.5-mile oval. According to the release on the speedway’s website, Hawg Heaven Bacon Nachos feature four forms of bacon all in one dish: white nacho bacon cheese sauce, chunks of hickory smoked bacon, candied bacon and bacon powder.

“We serve thousands of orders of nachos over a race weekend and we wanted to give our race fans a more compelling alternative to our biggest-selling item while extending our Hawg Heaven brand,” said Levy Restaurants Chef Lincoln Engstrom. “Nothing goes better with racing than bacon, bacon, bacon and more bacon!”

Last year, the company introduced its Shake’n Bacon Brew, a milkshake infused with beer and bacon. For those not of legal drinking age or who didn’t want the alcohol, another version was offered with root beer in place of the beer. Levy Restaurants was also behind the bacon cotton candy and bacon-infused martinis that were offered previously.

The new concession item will be available throughout the AAA Texas 500 weekend at Texas Motor Speedway from Oct. 31 – Nov. 2.

I just want to tell you that I’m beginner to blogging and site-building and definitely savored your blog. Most likely I’m planning to bookmark your blog post . You surely have superb articles and reviews. With thanks for revealing your web page.

My Partner And I really desire to show you which I’m just raw to wordpress blogging and pretty much cherished your post. Most likely I am prone to store your article post . You seriously have superb article topic. Appreciate it for discussing with us your domain write-up.