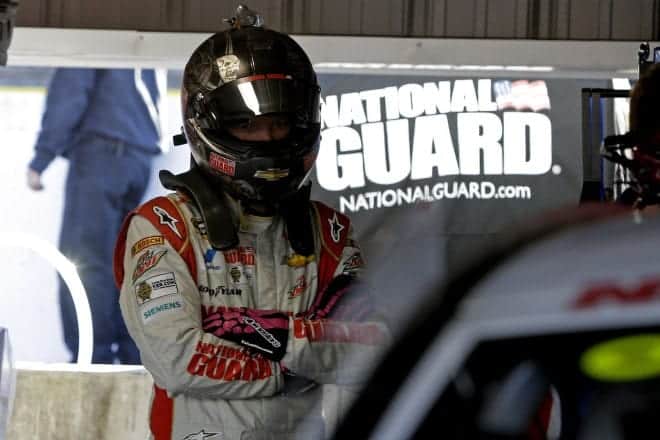 For Dale Earnhardt, Jr., 2014 was supposed to be “the year.” It’s his final go-round with crew chief Steve Letarte, seventh season with powerhouse Hendrick Motorsports and last season with major sponsor National Guard. This year’s Daytona 500 winner, he was the first man to clinch a Chase bid and, entering Sunday had totaled three victories for the first time in a decade. The last three wins for Earnhardt were remembered by years, not races: 2006 at Richmond (his DEI swan song in Victory Lane), 2008 at Michigan and then hitting the jackpot there again last June.

Perhaps most importantly, though was the number sitting on Earnhardt’s birthday cake this month, candles he most certainly didn’t want to blow out – the big four-zero. It’s hard to believe, but the son of the sport’s 2001 national tragedy is closer to an AARP magazine subscription than being that young, gushy twenty-something who quietly took the NASCAR circuit by storm before turning into its most popular link to an aging generation. Earnhardt, whose sponsor National Guard bailed on him, is now struggling to find funding and must start over, with a brand new crew chief, at an age when careers start to plummet, not peak. His dad won his last title at age 43, while teammate Jeff Gordon is fighting for that hardware at the same age. The oldest title winner in Sprint Cup this century is Tony Stewart, age 40, acing a driver/owner scenario that’s increasingly rare. Earnhardt could still battle back to the top, but it won’t be easy.

How, then should his 2014 season be judged in an era where the sport defines itself by one word and one word only: Chase. The championship is all that matters now, right? It’s what Earnhardt was supposed to win, a storybook ending for Letarte and validation for his renaissance season, one that would leave him third in points without the playoff was his best yet with Hendrick Motorsports. Judged by that criteria, then the last seven races for Earnhardt have been a complete failure: Kansas wreck, Charlotte shifter issue and Talladega tangle left them out of the Chase, most likely outside the top 5 in points by season’s end and an afterthought from now until Homestead.

Yep, we’re all supposed to write an “F” on this season for Earnhardt and be done with it. Except a funny thing happened, Sunday at Martinsville… the driver allowed himself to rewrite his own report card.

“I could care less about all the points right now,” he said after a hard-fought, hard-earned victory. “We love winning races. Winning races is the best thing.”

Earnhardt’s charge to the front, ending with an aggressive pass on Tony Stewart, was a work of art on a day where racing, not running for points, took center stage. Giving up the lead for fresh tires, on the race’s final caution, he restarted fifth and had just five laps to make it back to the front.

It took him less than two.

“At the end the right things had to happen on the restart to get by those guys, and it just sort of did,” he said. “I couldn’t believe it.  I still really can’t believe it.  The clock seems so hard to get.  This is so special.  I try not to get too caught up in the emotion of it because it’s a team deal, but this is very personal and very special to me to be able to win here.”

You would think Earnhardt and Letarte had won the title, the way those two were celebrating in Victory Lane along with a raucous No. 88 crew. (Earnhardt promised plenty of beer and a keg stand for a Sunday night home celebration). But that’s because for them, Martinsville was like taking home a title. For years, the duo had come close only to fall short based on circumstances or bad luck. The driver has led a total of 972 laps here, a career best at any Cup Series track and collected three top-3 results since working with Letarte. It was one of their favorite tracks, where they came in as a pre-race favorite… and most frustrating, all wrapped into one.

“I how hard it is to win races, especially at this particular racetrack,” said Earnhardt. “How many years we’ve been coming here and trying to win. We sort of come out of our shell when we do accomplish things like we accomplished today.”

Earnhardt passed Tony Stewart, himself recovering from a difficult season and who gambled on the final caution by staying out. While the No. 14 car faded to fourth by the finish, Smoke’s smile after the race showed you how much the moment meant to him. Burdened by tragedy, not a fight for a title, it’s a Sunday run that could turn his career back around. It turns out, you see, that in the midst of a “championship chase” there are individual moments, individual races that still stand out for those not competing within it.

“This place, [Earnhardt] talks about it a lot,” added Letarte. “We prepare for this race like most people prepare for the Brickyard. He talks about winning a clock a lot. Now, hopefully when I’m at his house having a cold one we’ll listen to the time 10 years from now and smile.”

Notice no Chase talk, interwoven within the conversation. When pressed, Earnhardt admitted that yes, the playoffs have been a disappointment and everyone on that No. 88 team wishes they could have another shot. But somewhere, that disappointment was lost amongst the smiles, taking Twitter pictures with Junior Johnson and stepping back to honor those lost in the Hendrick Motorsports plane crash, occurring outside Martinsville ten years ago.

That trophy at Homestead? Sure, it’s important. But Earnhardt Sunday reminded us, with his fourth victory (matching the number of top-5 finishes potential champ Ryan Newman has this season) it’s also not the only thing causing drivers to start their engines each week. The big trophy’s nice, but turns out they make other ones for each individual race, too. A driver never loses that burning desire to win, no matter how many times he’s thinking over that math chart otherwise known as Sprint Cup points.

“Winning races is the priority,” he said. “I don’t know that I’d be that damn happy about winning a championship had we not won any races this year. Winning these races is a whole lot of fun.”

Good thing someone knows how to survive without the Chase.

How nice to just enjoy good, close racing without having the albatross of the chase spoiling it. The true joy seen in victory lane was wonderful.

Tom… Have some Kool-aid and embrace the chase. Brian knows what’s best.

Seriously, great column. It was nice to see Junior so happy after being eliminated from the chase the week before. It was almost as if, once freed from the chase BS, he could enjoy racing again. I wish us fans had that luxury.

I’m glad that the site is functionally again but I have to ask; does anyone else run into the issue of clicking on an article link only to have it open not to the usually Frontstretch article with all the graphics and ads but instead to the article in a text format? If I refresh the article it sometimes will revert to the article with the graphics and ads but for the most part it will show up in text format with no ads. It has been an issue I’ve noticed for awhile on various laptops but tonight it seems to happen a bit more.

Yep, I have that happen sometimes too.

Junior’s reaction to his win should remind everyone including Brian that winning is its own reward. There is no need to manipulate wins to mean anything else.

Great reminder about what racing should be about, winning. The championship shouldn’t be the center of the universe at every race from the Daytona 500 to Homestead but that’s what we’ve got,
Can’t wait to see if the ratings bumped up.

I just want to mention I am just new to blogging and actually savored your blog. Most likely I’m going to bookmark your site . You absolutely have fantastic writings. Cheers for sharing your webpage.

You’ll find it mostly unattainable to see well-informed women and men on this content, still, you look like you know the things you’re covering! Excellent

It’s actually mostly unthinkable to see well-informed users on this theme, nevertheless you look like you understand which you’re posting on! Many Thanks