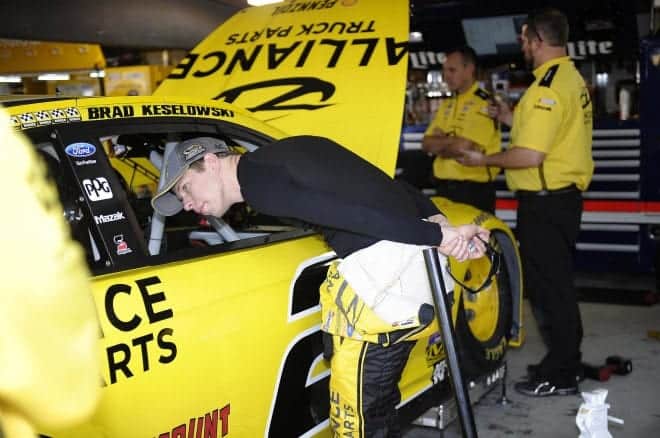 Sprint Cup Series: Favorites Back in the Pack – Jeff Gordon somehow kept his car clean and was able to to score a second-place finish at Martinsville.  For a driver who probably had to hire someone to keep all of his Martinsville clocks polished and keeping time, that result is not surprise.  In fact, he had to be the favorite to snag the win as the laps were ticking off.  Settling for second will do, however, thanks to the troubles that some of his fellow Chase drivers endured.

Brad Keselowski’s fall from the upper positions came due to a mechanical failure that arose like a haunted spirit in his car.  When it gave up the ghost and Casey Mears plowed into him, his day was all but done, taking a 31st-place finish.  Not good.  For a guy who just pulled off the NASCAR equivalent of a walk-off home run at Talladega, his Martinsville race leaves him in a difficult spot.

Kevin Harvick also finds himself in troublesome terrain thanks to Matt Kenseth popping into him.  Kenseth got away clean, for the most part, but Harvick spent time in the dreaded position behind the wall, and could muster just a 33rd-place finish.  Thanks to Gordon doing what he does, Harvick and Keselowski now find themselves way back.

Because Dale Earnhardt, Jr. won, that means that at least two of the positions for Homestead will be comprised by drivers earning their way there on points.  Keselowski has been strong on the intermediate tracks, so it wouldn’t be a surprise to see him win at Texas next week, while Harvick has shown that he can take over Phoenix, which would put them both in at Homestead due to wins.  But the odds on both of them winning, are tough – as noted by Earnhardt stealing a win this week.  Fun times for drama.  Huston Ladner

Nationwide Series: A Season Winding Down – After spending the last two weeks sitting idle, the Nationwide Series is back in action at Texas Motor Speedway this weekend for one of its final three weekends. Chase Elliott currently holds a solid 42-point lead over teammate Regan Smith in what can only be called a dream season for the rookie. Elliott has three wins, 14 top 5s and 24 top-10 finishes in 30 races this year.

While he has a solid championship lead, Elliott can’t afford to become complacent in the remaining races this season. That 42 markers could easily shrink with a poor finish, and then the whole complexion of the points battle would change dramatically. Just a few short weeks separate Elliott from taking home Rookie of the Year honors alongside a series championship, and it’s definitely worth tuning in to see the remainder of the season unfold. Beth Lunkenheimer

Camping World Truck Series: Tempers Flare at Martinsville – Johnny Sauter led laps at Martinsville and found himself within striking distance of another victory on Saturday afternoon, but on a late-race restart, Timothy Peters executed a nearly-perfect bump-and-run that left Sauter with a sour taste in his mouth. Though Peters didn’t win, Sauter was dropped back to seventh in the running order by the hit, and he wasn’t too pleased, showing his displeasure after the checkered flag. As the pair headed down pit road, Sauter bumped Peters multiple times before stopping right against the back bumper of the No. 17 Toyota. The two exchanged words but not much more since NASCAR officials and team members were right there as both drivers exited their trucks.

“I cut him a break earlier and it’s just Martinsville,” Peters said after the race. “(Johnny) Sauter is Sauter — I’ll buy him a beer next week at Texas.”

Perhaps the most amusing part of the whole thing is that Sauter got so upset over a move that has been used so many times in the history of NASCAR racing at Martinsville. In fact, he performed one of the exact same passes on eventual winner Darrell Wallace, Jr. earlier in the race to take the lead. In the end, it’s really much ado about nothing and a disagreement that has probably already been forgotten. Beth Lunkenheimer

ARCA Racing Series: Season Opener at Daytona Announced – Though the full 2015 schedule has not yet been released, the ARCA Racing Series announced earlier this week that its 2015 season will once again open at Daytona International Speedway, as it has for more than 50 years.

“As we discuss in the drivers meeting every year, it’s an honor and a privilege to race at Daytona International Speedway, and it carries with it great responsibility and even greater opportunity,” said ARCA President Ron Drager. “The impact of ARCA racing at Daytona is unequaled over 50-plus years, and it continues to be the longest-running annual race on the ARCA Racing Series presented by Menards schedule. The entire ARCA community is very proud and appreciative of the opportunity to race at Daytona.”

According to the release, ARCA began at Daytona when “Bill France Sr. asked ARCA founder John Marcum to bring his Midwest-based stock car series south.” The full schedule is expected to be released at a later date. Beth Lunkenheimer

Sports Cars: The GT-Daytona Class Will Be Cut Down to Size in 2015 – During the inaugural season for the IMSA TUDOR United SportsCar Challenge, the GT-Daytona class boasted the largest car count. At the Rolex 24 at Daytona, 29 cars took the green flag; ultimately, 19 cars ran the full season, but don’t expect anywhere near that number next year.

Since GT-Daytona will run the full FIA GT3 rules in 2016, next season is a transition year for the class, as they’ll likely run very similar rules to this season, depending on any changes that come from the Rolex 24. That’s the problem here.  The class, as currently constituted, requires teams that run GT3 cars to make expensive modifications to slow their cars in order to race.  Also of note, teams racing Porsches in GT-Daytona will likely have to ditch their 911 GT America’s after 2015 because they are not GT3 cars.  Instead, they are based on Porsche Supercup racers and was designed specifically for TUSC.

Unfortunately for IMSA, GT-Daytona is not the only place in the United States to run a GT3 car.  Pirelli World Challenge welcomes GT3 cars without modifications, making the series a much cheaper alternative.  Teams have been turning to the sprint race series, once all but dead, in droves.  Numbers have increased to the point where the GT/GT-A/GTS races regularly attracted 50+ entries last season.  The slower touring car classes (TC/TCA/TCB) have had to be permanently split into their own race (and their own separate TV deal with MavTV).

Flying Lizard Motorsports, which fielded two Audi R8’s in 2014, is rumored to be moving to Pirelli World Challenge as well.  The team has not officially announced its 2015 plans as of yet. Dempsey Racing is likely done in the series, while others are either evaluating switching to another series, or dropping down to part-time.  SportsCar365.com is estimating 6-10 entries for the season, a substantial decrease from 2014.  As of now, the only confirmed entries are one Porsche apiece from Alex Job Racing and GB Autosport, at least one Porsche from Park Place Motorsports, Scuderia Corsa’s Ferrari and Riley Motorsports’ SRT Viper GT3.

While more teams (Ex: Magnus Racing, the second Alex Job Porsche, Paul Miller Racing, etc.) may end up signing on for another season, 2015 will not be the same for GT-Daytona.  The Prototype Challenge / GT-Daytona round at Lime Rock Park in July may have a rather thin field, indeed.  Phil Allaway

I just want to mention I am very new to blogging and site-building and definitely loved this web-site. Most likely I’m want to bookmark your site . You definitely come with good articles. Bless you for sharing with us your webpage.

be it technique, food, clothing fashion, the famous people, and many others, many americans learn that the only way to be is usually about the mind of all this.

anyone own it then You got excellent posts perfect.

it wasn’t that some time past we was a teen myself and I be aware that notwithstanding i did not usually receive what need be for the purpose of holiday, i believed i was commonly glad just that mother and father done.

and as a consequence my pops is just headstrong.

A 14 yr old colleague Prefers these kinds of & in most cases delivers wow gold to highschool. Nice and then good . Wondering the way they will likely maintain several months?

do you need an additional amusement fur headband? I don’t think extremely.

yes, The bronzer you fell in love with remain vacation can nevertheless meet your needs within your doldrums linked feb,march.

You’ll find it mostly not possible to find well-informed men and women on this theme, yet somehow you look like you fully understand the things that you’re talking about! Regards

within the particular gift worth it’s the dilute.

the exact coach opportunity advertises products especially for every sort of its purses.

The UGG footwear was established to retain the feet very warm, rather isn’t made turn into water-resistant.

It will obtain very own foot and will store them snug.